Like Batman, Monster Squad’s style is high-camp, meaning that all the heroes face their various crises with melodramatic solemnity, a solemnity that plays to adults as funny but kids as serious.

Also like Batman, Monster Squad is famous for its rogue’s gallery of celebrity villains.  Some of the actors who wore crazy get-ups and twirled their metaphorical mustaches on the program included Julie Newmar as “Ultra Witch” and Jonathan Harris as “the Astrologer.”

Briefly stated, the premise of Monster Squad is that a young and hopelessly earnest criminologist, Walter (Fred Grandy) has developed a fantastically advanced crime computer at the Chamber of Horrors exhibit in the basement of Fred’s Wax Museum. This large-scale computer can rise out of a sarcophagus platform when in operation, and features a “secret government” channel and radio transmitter.

One day however, the “oscillating vibrations” of Walter’s crime computer awaken three of the museum’s figures, Dracula (Henry Polic II), the Frankenstein Monster (Michael Lane) and The Wolfman (Buck Kartalian). These figures are apparently the real deal, resurrected, and not merely wax representations of them.  However, it is never explained why the wax museum was housing the bodies of such dangerous monsters. 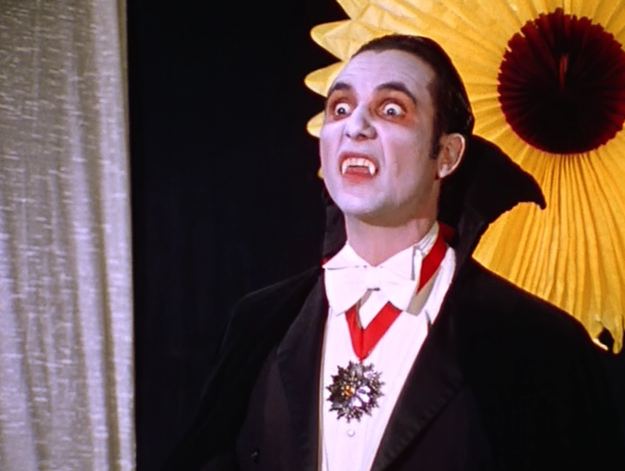 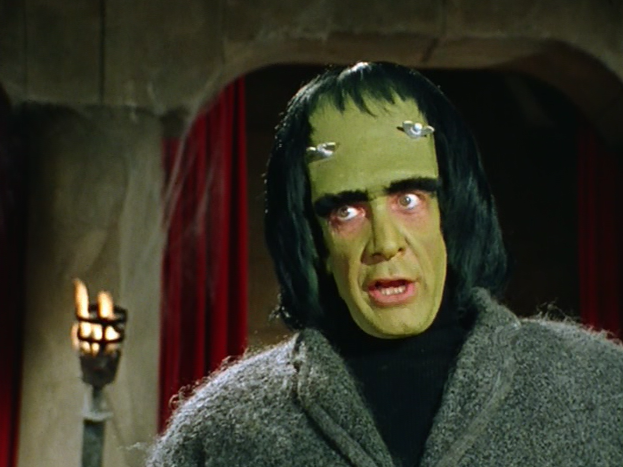 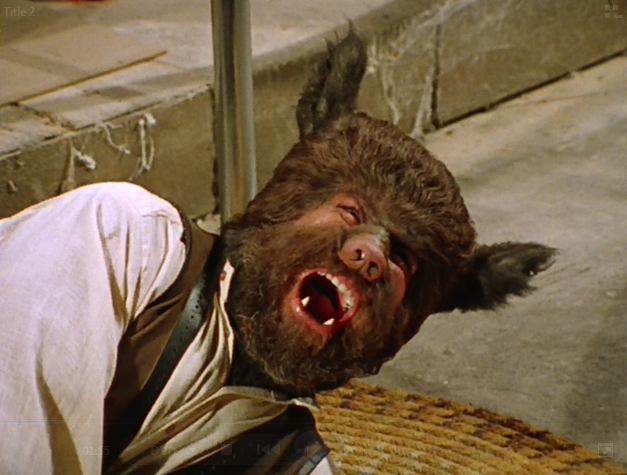 Regardless of their precise nature, these three “monsters” from history wish to atone for their sins by solving crimes with Walter, and thereby making reparations to society.

With Walt operating out of the Chamber of Horrors, Dracula, The Wolfman and The Frankenstein Monster are thus frequently dispatched -- in a black 1970s van -- to combat evil-doers around the city. 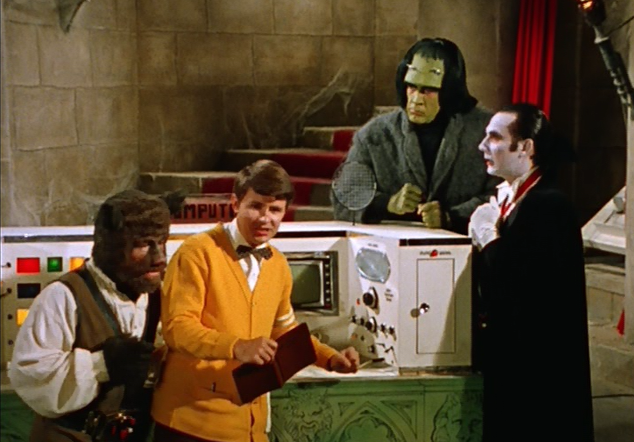 The first episode of Monster Squad, “Queen Bee” -- which aired on NBC the morning of September 11, 1976 -- stars Alice Ghostley as the insect matriarch, the aforementioned Queen Bee. As the episode commences, she has ordered her bee minions around the world to attack unsuspecting humans.  This “unexplained rash of bee stings” is noticed by Walt, who captures a bee and attempts to interrogate it with the Crime Computer.

One will notice here that the Crime Computer has a slot designed and labeled for insect analysis. This makes one wonder how often evil bugs show up in town… 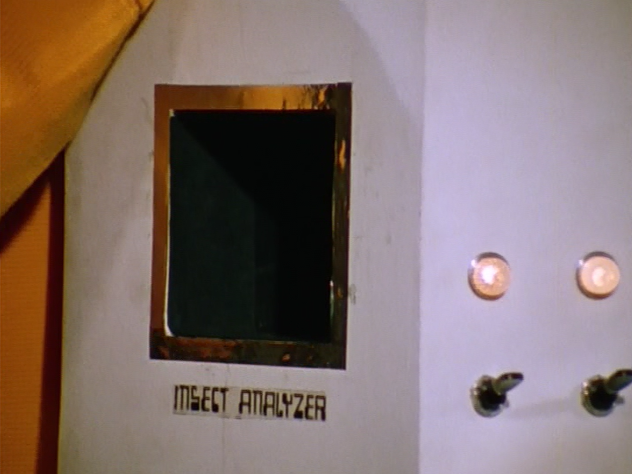 After a time, Walt frees the bee, and Dracula tracks it in bat-form to Queen Bee’s headquarters. There, he and his monster must stop the Queen Bee’s plans before the United Nations can surrender the world to her.

The 1970s represents the great era of “killer bee” entertainment, from the movies Invasion of the Bee Girls (1973) and The Swarm (1978) to TV series such as The Starlost (1973-1974) which featured an episode about giant bees called “The Beehive.” 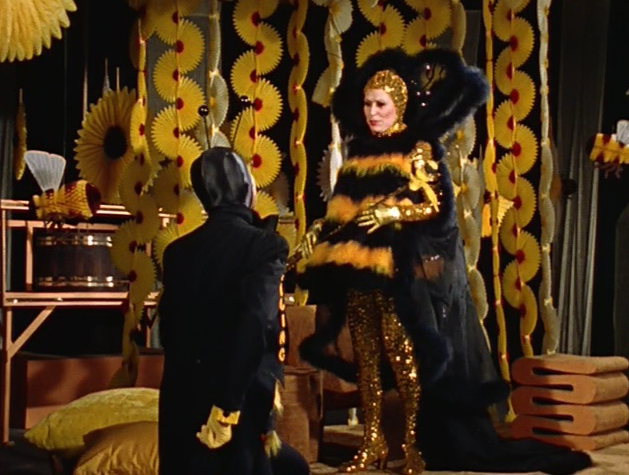 In terms of “Queen Bee,” the Monster Squad episode reports about the South American killer bee briefly, but otherwise conjures up little in terms of fact.  Instead, the installment features about a hundred bad “bee” puns for Ghostley and her buzzing minions.

“I bee-seech you,” says one character.  “Bee-ware your fate,” says another.

After a while, we also get “bee-lieve me,” “bee-guiling,” “bee-wildering,” “bee-headed,” “bee-trothal,” “bee-tray” and other variations on the theme.  One non -“bee” joke is Queen Bee’s comment that one of her minions always “bumbles.”

As you can probably guess, this witless approach grows tiring after a while, though it anticipates the approach to Mr. Freeze in Batman and Robin (1997).  The episode -- like all Monster Squad episodes -- plays as particularly arched, and not overly amusing.  Everyone is in on the joke, but the joke isn’t as amusing as it is on Batman, and this Saturday morning series also lacks the resources, and hence production values of that camp classic.  For instance, here Dracula is put in a vat of honey, and the vat is a tiny little barrel. 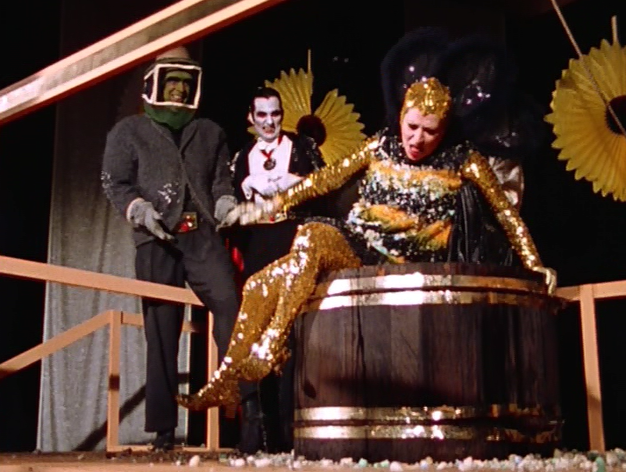 Viewers who were kids in the 1970s may be most interested here to see a Mego toy re-painted and used as a prop in “Queen Bee.”  Ghostley’s “bee” communicator is actually a Star Trek walkie-talkie from the age, but painted gold.  The prop -- with a different paint job -- recurs as Walt’s crime computer remote control in the next episode, “Mr. Mephisto.” 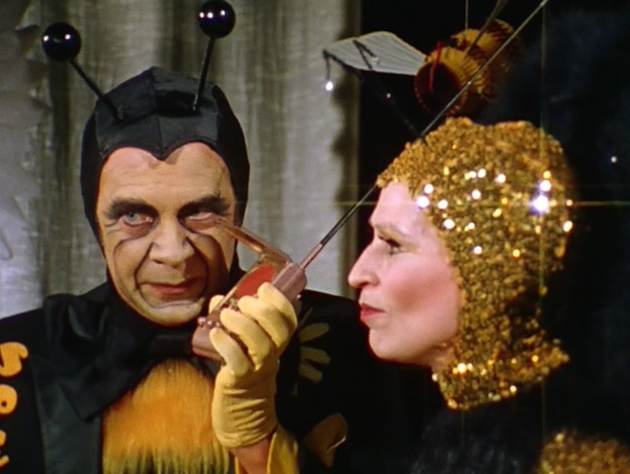 Although Monster Squad doesn’t hold up particularly well-today, I remember that I absolutely loved it as a seven year old, and that I wished and hoped for action figures, playsets and other toys featuring these lovable and familiar monsters. There was, as memory services, a board game available at one time.

As bad as some of these episodes are, the opening theme song and introductory montage still provide me a nice kick of nostalgia…