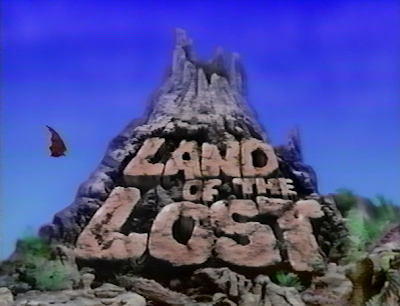 In “Mind Games,” Shung (Tom Allard) becomes obsessed with Christa (Shannon Day), and uses his crystal blade and a stolen “peace” pendant to control her mind.

This mind-control comes at an unfortunate time, however, as Annie Porter (Jenny Drugan) is spending time with Christa, learning to survive in the jungle and use a bow-and-arrow.

The Porters rally to save Christa, even as Shung takes control of her mind… 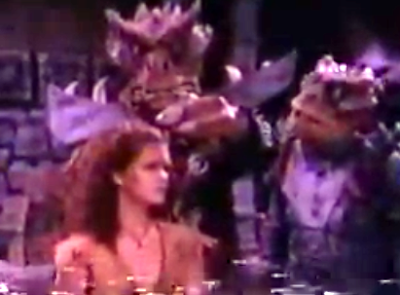 “Mind Games” is another fun, though not inspired, episode of the 1990s Land of the Lost.  Annie, Tasha and Christa have a sleep-over while the “boys” re-shingle the tree-house roof, and once more Shung makes trouble.

For some reason, this week Shung is obsessed with Christa -- though I can’t blame him -- and sets about making her his slave.  Christa struggles to break free of his influence, even as he tells her “I own you…I am your master now!”

Why does Shung care, one might ask.  Good question.

The episode also concerns Annie’s training to survive in the land of the lost, which is a good idea given the circumstances.  She could end up like Holly or Christa  -- alone in a hostile world -- and so it makes sense that she should be trained in using a bow and arrow.  The only sexist thing about this plot-line is that no one suggests Kevin learn to take care of himself in the same way.  It’s just assumed that he is capable of doing so.

Two other moments stand out in “Mind Games.”

In the first, Christa swings on a vine and performs a spot-on Tarzan yell.  She swoops in to save Stink quite adroitly, but the yell -- and the vine -- represent clear Tarzan allusions.  The reference fits since Christa is a human child raised alone in the wild.

This toy represents yet another modern  luxury in this iteration of the Land of the Lost.  The Marshalls had virtually no such modern items in the 1970s version of the show, but the Porters have a boom-box, a video game console, a car, a video camera and more.

This wealth of conveniences makes the new show seem more like an extended camping trip than a legitimate stranding in another pocket universe.  I just hope, at some point, the series acknowledges that the car will run out of gas, and the video camera and video game unit will run out of battery power…