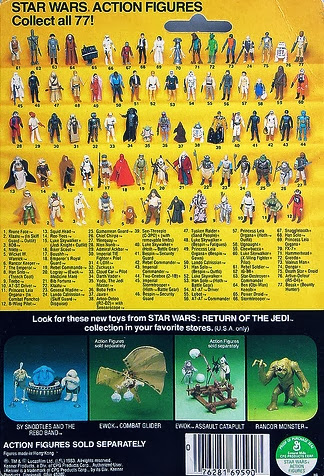 My friend, and regular reader Duanne Walton presents a list of one type and brand of toy.  And it’s a great list of one, as you’ll see:

“This isn't a top ten list because there's only one answer for me - and not subject to change.    Star Wars action figures.

I didn't even get into Star Wars when it first came out. My taste in Sci-Fi was very selective. If some unusually large creature didn't cause large amounts of property damage, I had no interest. 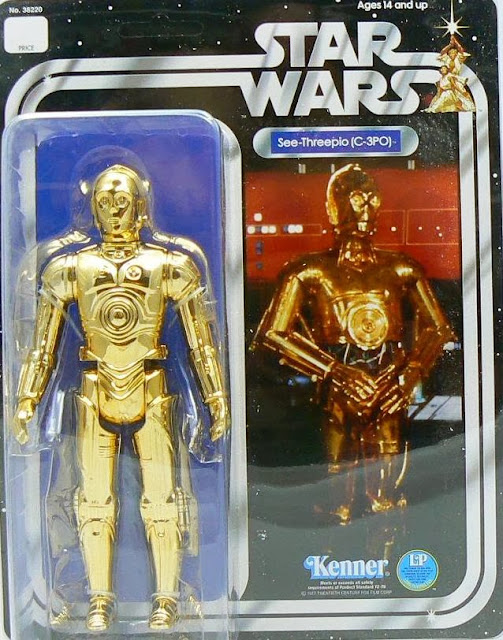 But C-3PO did catch my interest. A golden robot that spoke with an English accent? What a concept! I saw his figure in the store and my folks got him for me. I remember the time I had unsticking his arms and legs so they could move. I was scared I'd break them off!

Of course I figured he'd need his little buddy to keep him company. And then, I figured I needed the Jawa to keep them both in line. 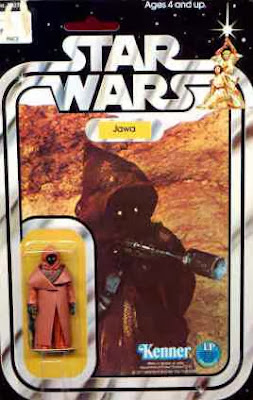 At this time, I read the Star Wars Storybook and became hooked. Now I had to have everything! I started collecting in earnest. I got the Death Star for Christmas and moved all my figures in. Of course, I eventually used all the pegs that held the figures in place, so I put everyone where I could. The Death Star became quite crowded.

I started having my own Star Wars adventures. Of course, they were nowhere near the level of the movies. Mostly, the plots consisted of rescuing someone from Darth Vader, rescuing Han from the Cantina gang (as I dubbed the four aliens) or the bounty hunters. The trash compactor regularly overflowed and the trash monster got loose. 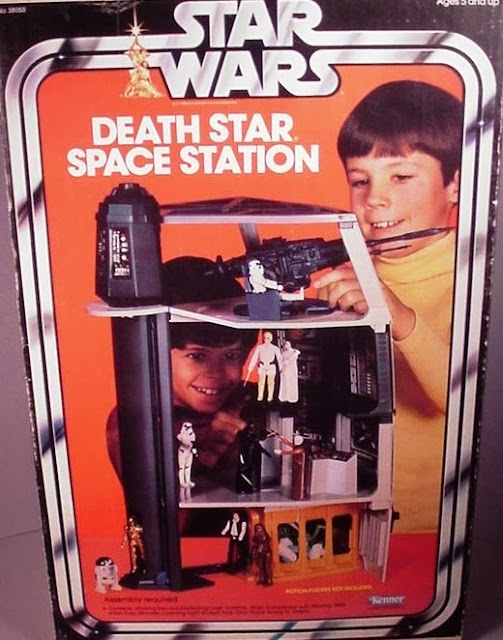 It became clear that I'd never get every toy that Kenner came out with (my parents never ceased to remind me), so I focused on the action figures. I eventually stopped my adventures with them and just focused on collecting them. I got the original collector's cases and two Darth Vader collector's cases and placed them all in them. I occasionally displayed them at the Morris (Illinois) Library, much to the delight of the kids. One guy offered me a lousy fifty dollars for them, and I declined.

No other action figure line held my interest. But when no new Star Wars figures were in, I'd read the files on the backs of the G.I. Joe figures. That appealed to me: giving them names and backstories. I did end up buying Destro. I only got figures from other lines if the characters appealed to me.    The line finally did run its' course. I collected all of them except for three: the original Snaggletooth (the tall one in the blue suit), Luke as a Stormtrooper (from the first movie, coming out in the last wave of figures), and Yak Face (Who was never released in the U.S.). I put them away, only taking them out for the occasional library display. But I knew they'd be worth a lot.

Two decades and several hard knocks later found me spending most of the summer of 2005 unemployed. I had to sell my collection sooner than I expected. Most dealers were unprepared to see a nearly complete collection in such good condition - and most were unprepared to buy them.    Finally, a collectibles store in Chicago bought half of them for less than their worth (that's the first thing I was told: you will almost never get what the price guides say they're worth). The rest I sold to a lady at an antique mall. It felt very strange having to sell them, like I was losing a large chunk of my life. I do wonder sometimes where they ended up and if they've been as well cared for as when I had them.    I've only collected two other action figure lines as closely: Batman the Animated Series and Doctor Who. But I'll always remember where it started: not so long ago, in a galaxy not so far away.”

Duanne: I loved reading your reminiscences about Star Wars action figures, and how your love for them developed and grew over time.  I suspect that many kids of our generation could tell a love story that is similar in nature.

I remember in the early days, when not all the playsets were available yet, I had a land speeder, the Cantina Aliens, and a few other figures.  So my “game” became the adventures of Sheriff Snaggletooth and Deputy Hammerhead at Mos Eisley.  It sounds silly, I’m sure, but I loved playing that game, and having Snaggletooth arrest Greedo and Walrus Man (the bad guys).

I’m sorry to hear about the necessity of selling your collection.  I have had spells where I too needed to sell some toys, and as I’ve written before, I intend to divest myself of large chunks of my collection soon, to help save for retirement.

Great memories, Duanne.  I really enjoyed reading this.
at December 13, 2013