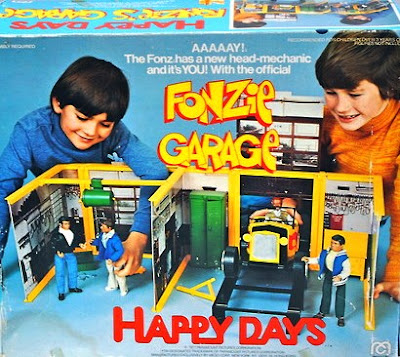 Also released and marketed by Mego were Fonzie's motorcycle, an old jalopy, and this great, over-sized garage playset.

The art on the box reads:   "AAAAY!  The Fonz has a new head mechanic, and it's you with the official Fonzie garage." 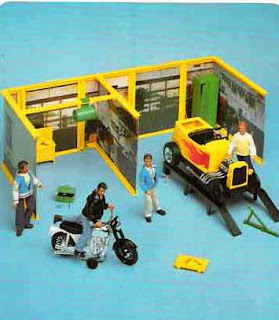 The play-set is remembered today for its backdrop art, which consisted of photographs of a real garage interior, and because it came packed with the (now very rare...) Fonzie hot-rod.

It seems odd that in the heyday of Star Wars and the space craze, a TV series inspired by another George Lucas production, American Graffiti (1973) was responsible for so much merchandise, including trading cards, T-shirts, color-forms, and these action figures.  The nation was riding high on 1950s nostalgia at the same time that it was getting into outer space action.

I remember that I always wanted the Fonzie garage playset, and that my best friend at the time had one. One day, I went to his house to stay for a few hours after I got sick at school because my mother couldn't pick me up, and I got to play alone with this Mego kit and the figures.  It was absolute Fonzie nirvana...

Below is a toy commercial for Fonzie's beloved bike (from Mego).

Email ThisBlogThis!Share to TwitterShare to FacebookShare to Pinterest
Labels: collectible of the week, Mego