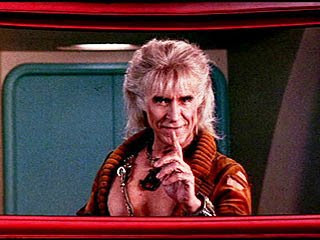 "If you watch “Space Seed,” Khan is a superman. He was cryogenically engineered to be invulnerable. That would have given him a tremendous advantage if we’d chosen to put him in the same place as Kirk. We just felt that if they never saw each other, except on screens, it’d work better. You had the distance of time – the 25 years since they’d seen each other – and the physical distance of space. If I had it to do again, I wouldn’t change a thing. It was a novel way to have the protagonist and antagonist fight through two hours of a movie."

- Harve Bennett discusses Star Trek II: The Wrath of Khan (1982), and the creative decision not to have a physical confrontation between Kirk and Khan.
at April 01, 2013