To this day, I boast a very distinct memory of being in a Ben Franklin-type store with my parents and sister in the year 1979, and sneaking over alone to the book rack to steal a look at two "scary" literary titles: Prophecy by David Seltzer and Alien by Alan Dean Foster.

Of course, both books were based on film screenplays, and I remember thinking --- as a fourth grader -- that both seemed absolutely terrifying.

I also remember feeling amazed and kind of free, maybe even giddy, that I could turn to any page in either book and read something that would torment my imagination for days and weeks to come.

And then I tried to imagine how scary the movies would actually be.  I had to imagine that factor because my parents are good ones, and they would never have let me see R-rated movies at the tender age of nine.  So if I was going to *know* about these horror stories...I had to read the books.

I didn't see either film until I was older, though I did read and enjoy Foster's Alien first.  Seltzer's Prophecy is also better than the movie, I think. 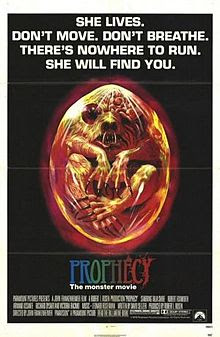 Today we know, of course, which of the two films has better stood the test of time: Ridley Scott's Alien over John Frankenheimer's Prophecy.  The former is a celebrated classic, and the latter is a kind of...hoot, a camp-classic.

But interestingly, both films came out in the same year, and in very broad terms boast a few similarities. Both films involve reproduction, and a threat to human reproduction, in the form of something unknown and homicidal  And both films also involve a gigantic nemesis whose form is not immediately known or understood.  Prophecy draws its life force from American history and the American past, while Alien draws its energy from the future, and cosmic unknowns.

The advertising from both films, as you can see from images above and below (in the trailers), highlight images of eggs, and something evil growing inside an egg.  I think that was probably the key scare factor for me at age 9.  Something horrible was going to hatch in both stories.

In terms of how it succeeds or fails Prophecy -- sometimes grandiosely termed "the monster movie" -- is really about the "past" of horror movie-making in 1979 terms: about a cinematic story scuttled by a ridiculous and unconvincing monster suit.  In contrast, Alien represents the defining line in modern horror  film where monsters became believable, even when shown on-screen for a long duration.

Similarly, Prophecy is earthbound, while Alien looks to the stars.

I know it probably seems odd, but today when I think of one film, I inevitably think of the other  one because of that experience in the book store, I suppose.  I'm sure this linkage has to do with where I was in my development at that time, gaining an awareness of books and movies that I wanted to see, but which I also knew would likely scare me.  I remember very vividly seeing commercials for both films on television and feeling truly conflicted.  Like I had to see both movies, and yet was afraid to see both movies.

At the age of nine, I couldn't have predicted that Prophecy would be a bust in terms or scares, or that Alien would generate approximately one million and one imitations.  I just knew that, for some reason, Hollywood was giving us two horror movies at the same time that seemed to have a broadly similar appeal.