Collectible of the Week: Kronoform Wargon (of the) Robotic World (Takara; 1984) 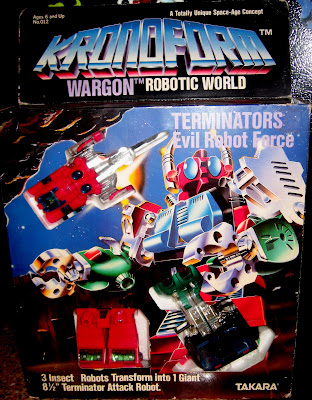 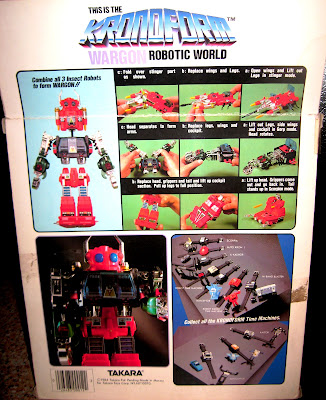 My six-year old son, Joel, and I both have an obsession with pre-Transformer Japanese robots.

Exhibit A of the type might be this colossal Wargon robot from Takara, copyright date 1984.  It stands over eight inches tall and is formed from three individual insect robots (scorpion, "gorp" and "stinger" bugs).

As the box notes, the insect bots "separate from [a] giant Terminator Robot to form three insect attack robbots" [sic].

But the toy is intended for ages six-and-up, which is perfect for Joel at this juncture.  Truth is, he is far more capable of transforming these toys than I am, and I marvel, sometimes, watching his small hands expertly manipulate these toys. 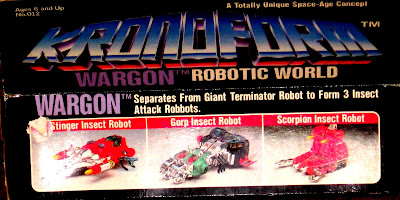 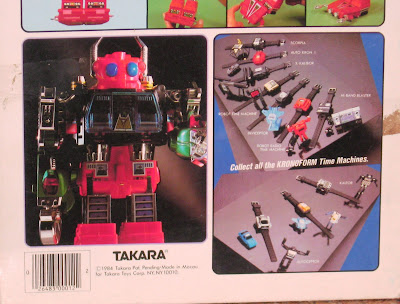 Made of metal and plastic, and colored green and red, the insectoid Wargon is one very cool vintage robot combiner.  And don't tell Joel, but it's a Christmas present.

Email ThisBlogThis!Share to TwitterShare to FacebookShare to Pinterest
Labels: collectible of the week, Takara