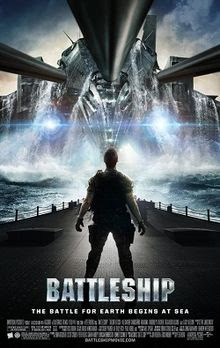 “We only have to look at ourselves to see how intelligent life might develop into something we wouldn’t want to meet.…If aliens ever visit us, I think the outcome would be much as when Christopher Columbus landed in America, which didn’t turn out very well for the Native Americans.”
-Stephen Hawking

Hollywood certainly has squeezed a lot of creative mileage lately from that quote excerpted above, and rightly so.  The idea of malevolent aliens raping and pillaging the Earth -- and wiping us out in the process -- is a powerful and frightening one indeed.

It works so easily in our current global context, I suspect, because we seem to be developing new and powerful technologies daily, while our wisdom hasn’t necessarily gone hand-in-hand with the “improvements.”  It’s not difficult to imagine a race of desperate, resource-starved aliens casting their eyes upon our beautiful home world, and deciding that we’re ripe for the plucking.  It’s their survival or ours.

To one extent or another, films including Skyline (2011), Battle: LA (2011), and even The Darkest Hour (2011) have all been informed by this notion of alien imperialists looting our beloved Mother Earth and committing genocide against mankind.

This summer’s Battleship -- based on the famous game by Hasbro -- utilizes the same inspiration to generally positive effect.  Here, a distant planet in the “Goldilocks Zone” of its star system sends an advanced military scout team of five ships to assess our planet for invasion and/or colonization.  But its communications’ ship is destroyed in orbit, meaning that the aliens must harness our own satellite technology against us. 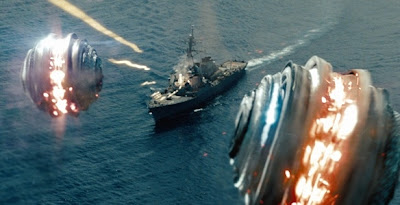 Cue the U.S. Navy, which by happenstance is undergoing a battle exercise in the Pacific just as the alien force set-up camp in the ocean.

With only three naval vessels inside the aliens’ force field bubble and able to intervene in the crisis on humanity’s behalf, the Navy must stop the aliens from sending home a message indicating that the coast is clear for all-out invasion.

Leading the surviving Navy ship -- and quite unexpectedly so -- is untested Alex Hopper (Taylor Kitsch), a slack, rule-breaking officer who is about to be drummed out of the service for conduct unbecoming an officer.

Does this insubordinate, unserious loser have what it takes to save the Earth and all-of-the human race?
In broad strokes, that’s Battleship’s narrative.

And in short, this movie is big, dumb, and, well, fun.  The film’s first few establishing scenes, with a “Burrito Girl” booty run are so breathtakingly stupid you may be tempted to turn off the film at once and watch something else.  But try to hold on. 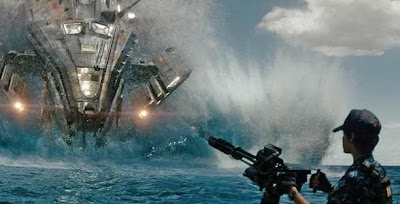 Because after an egregiously rough first act, Battleship picks itself up, dusts itself off, and offers a compelling tale of human vs. alien combat on the open sea.  Going in, one should understand that Battleship is a generic “blockbuster”-type film, not prone to subtlety or nuance.  But the special effects are extraordinary, and the cat-and-mouse battle between the denizens of Earth and the evil aliens grows increasingly tense and desperate.

Battleship is thus a movie you can fall in love with for at least one night. You may hate yourself the next morning.

But gee whiz, what a night…

Directed by Peter Berg -- who brought television one of its best dramatic series ever in Friday Night Lights -- Battleship really goes for the gusto here, plucking every string in its overwrought, manipulative arsenal to prime entertainment effect.  There’s an East/West rapprochement (at Pearl Harbor, no less), a paean to soldiers wounded in war, and a twenty-one gun salute to the Greatest Generation.

I must admit, I indeed felt a lump form in my throat form while watching the eighty-year old veterans of World War II take the battleship U.S.S. Missouri out of mothballs to save freedom…one last time.  It’s cheesy as all Hell, but it works. By the time of the Missouri’s up-fit for battle against the evil aliens, I knew the movie had me in its grip.

Treading a bit deeper, Battleship features two qualities that help it land a cut above the Michael Bay Transformers movies.  These are: the depiction of the aliens as only slightly more advanced humanoids than us, and the nature of the decision-making during the crisis. 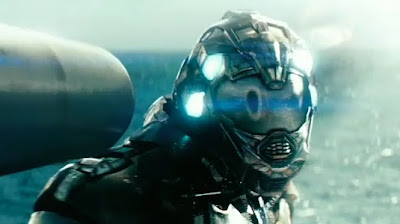 On the former front, the film -- again like Battle: LA -- pits man against aliens who are just a little bit ahead of us in terms of their technology.  They have a big advantage, but it isn’t necessarily a decisive one.  Once we learn their weaknesses, it’s game on.  Again, one must consider this dynamic a metaphor for the Iraq War.  There, our forces romped easily to Baghdad, but then had to face a homegrown insurgency.  I enjoy how the aliens are presented in Battleship because they seem like authentic soldiers, not just hissable movie villains.  They’re here to do a specific job, not engage in unnecessary brutality, and they are close enough to us in terms of physicality that we can recognize their motives.   They’re completing a mission they've been tasked with; nothing more.

On the latter front, Battleship puts its Navy personnel through the wringer, and again and again asks Hopper to choose between two equally unenviable and difficult options.  At some point, the discussion of the crew surviving the day is off the table. It all comes down to one question: how do we leverage whatever advantage we have to save the planet?  For all its shallow and generic qualities, Battleship asks its main characters to make some pretty tough calls.

I suspect the readership here already knows exactly what kind of film Battleship is.  It’s a film where handicapped soldiers get-up on their (prosthetic) feet and triumphantly walk, where cowardly scientists find the ability to stand up and fight, and where loveable losers step up and accept the mantel of responsibility.  It’s really just a re-purposed collection of all our old familiar war clichés.  And yet, somehow, the movie manages to be entertaining and engaging moment-to-moment, scene-to-scene. 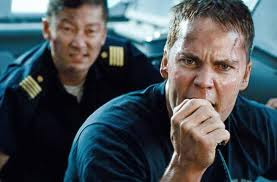 Perhaps part of the reason Battleship succeeds as ably as it does involves lead actor Taylor Kitsch.  Unlike a lot of young actors today, he possesses a unique ability to simultaneously be in the action and comment on the action.  He’s nearly Harrison Ford-esque in this quality.

In other words, Kitsch manages to convey some sense of self and character outside the specifics of the script, thus making some of the (groan-worthy) dialogue somehow less important.  Kitsch effortlessly carried John Carter (2012) this summer, which -- pound-for-pound -- is a much better film, but he performs the same task ably here.  Don’t believe all those stories in the press about Kitsch being in two major bombs this summer and the catastrophe it means for his film career.  This guy is going places (and I fervently wish one of those places happened to be John Carter 2).

As for Battleship2: Sub Search, I don’t think we’ll be getting that sequel anytime soon, and that’s perfectly okay with me.  Battleship is a legitimately entertaining “blockbuster”-type sci-fi film with some downright rousing moments. But not every sci-fi blockbuster needs to be part of a never-ending franchise.

Battleship stays afloat, but I don’t think it would be sea worthy for more than this shakedown cruise.
at December 28, 2012

Email ThisBlogThis!Share to TwitterShare to FacebookShare to Pinterest
Labels: 2012 on the blog