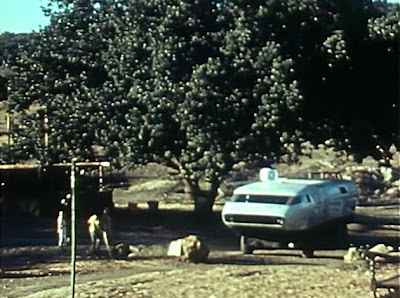 This week, Ark II takes a step down in interest and excitement from “The Robot” and “Omega,” the two previous series entries.  Here, the titular vehicle and its crew enter Sector 25 to investigate reports of “hunger and widespread unrest.” 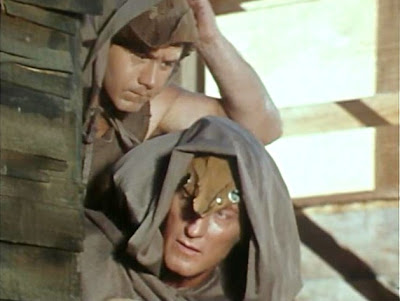 The team soon discovers that a group of outlaws have modeled themselves on the mythical Robin Hood and are fighting in Sector 25 an evil tyrant named Lord Leslie.  At first, Jonah is amused by the strange conflict and personalities the Ark II encounters.  He puts up a force field barrier between opposing armies during one battle.  But then, Lord Leslie captures the Ark II and Jonah’s crew is taken hostage.

While hoping to convince Robin and his merry men that “robbery isn’t the answer and neither is violence,” Jonah nonetheless requires their assistance if he is to retrieve the ark and its personnel. 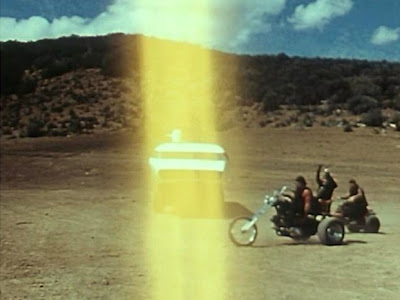 Fortunately, Jonah also has help – of a sort, anyway – from inside the Ark II.  The intelligent chimpanzee Adam has been taking driving lessons and, in a slapstick comedy scene, takes the craft on a wild joy ride, all the while firing lasers and even doing an embarrassed face palm.

Soon Jonah reclaims the Ark and the local villagers reject Lord Lesley.  Now Robin and his men will have to build a better society together, and Jonah marvels at how difficult it is to “keep the Lord Leslies of the world at bay.”

“Robin Hood” is a weird and borderline amusing episode of Ark II.  The idea of post-apocalyptic people taking on the characteristics of a hero from literature doesn’t seem that farfetched given other examples of this genre, like Star Trek’s “A Piece of the Action,” which saw an alien culture model itself on a book about the Chicago Mobs of the 1920s. 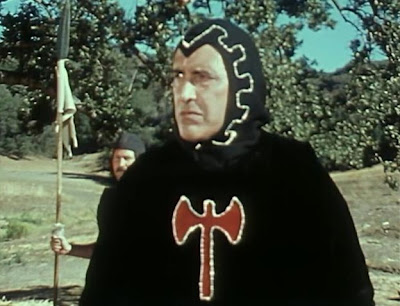 But one of the more interesting and bizarre images to come out of Ark II is certainly “Robin Hood’s” visual of Lord Leslie’s flamboyantly-dressed minions riding trikes in the desert. It’s like The Road Warrior meets the Crusades…in the Planet of the Apes Forbidden Zone.

Also, this is also the only episode (at least thus far) to devolve into out and out slapstick humor, as Adam drives the Ark II into danger.  It’s a unique experience to watch the huge Ark moving erratically, knocking things over, and otherwise proving a real road hazard.  By the same token, these scenes reveal just how difficult it is to maneuver this unwieldy (but gorgeous…) cult-tv vehicle.  The Ark II is huge, and doesn’t look like it corners very well…

Next week: “The Cryogenic Man.” 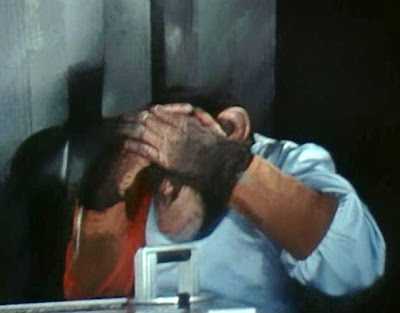