Link of the Week: Stealing Fire - In Praise of Prometheus 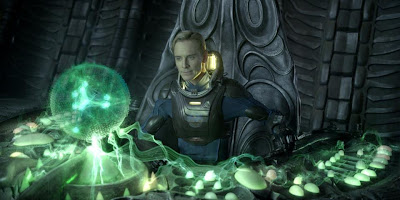 Other blockbusters films have come and gone this summer -- and many have met with great spikes and dips in popularity. Yet for many film lovers, Prometheus (2012) remains the story of the season.  There is something incredibly intriguing about this Ridley Scott film; some quality that keeps calling viewers back to it.  Ironically, even viewers who have (loudly) stated their dislike for the film have reported, on various sites, how they keep "thinking about" the movie.

I get it. Prometheus beckons me yet. I'd like to see the film again before it leaves theaters, but in all likelihood will wait for Blu Ray at this point.

This weekend at C.H.U.D. author M. Morse penned and posted "Stealing Fire: In Praise of Prometheus," another in-depth analysis and review of Scott's film, and one worthy of your time.  I wholeheartedly recommend the piece, not merely because it makes brief reference to my own review of the film, but because it goes deep into the DNA of the film, and comes up with some great connections to Nietzsche.

Prometheus mirrors Thus Spoke Zarathustra in a number of fascinating ways, right down to the image of a snake burying himself in the throat of a man.  Nietzsche's book concerns a "prophet" of sorts named Zarathustra (natch) who, during the course of the book, descends from his mountain home to bring new wisdom to mankind.  If that description reminds you of a certain Promethean Titan who descends Olympus to bring fire to humanity I would suggest the similarity may be less than accidental.

In Nietzsche's book, the character of Zarathustra comes to believe that humanity had experienced the death of God.  In fact, with the aid of an increasingly secular society and advances in the sciences, humanity had essentially killed him.  The notion of believing in an anthropomorphic deity came to seem foolish in the face of rationalism.  In Prometheus, science's discovery of the existence of the Engineers signals the death of the traditional Judeo-Christian God as the personal Creator of life on Earth.

There are many more insights and fascinating ideas in Mr. Morse's review, so if you -- like me -- find that Prometheus is something of an obsession, please check it out.  It's my "Link of the Week," and it adds considerably to the scholarship concerning the film.

Email ThisBlogThis!Share to TwitterShare to FacebookShare to Pinterest
Labels: link of the week, Prometheus