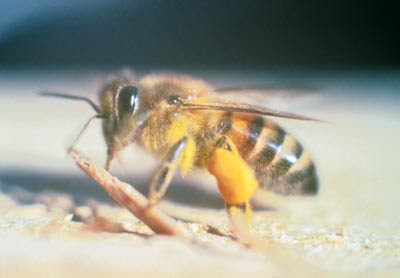 If you grew up during the 1970s, you likely remember the “killer bees” media panic of the era.  The fear -- widely embraced by filmmakers in the era of “animal attack films” -- was that aggressive Africanized bees were going to invade America from the south, and, well, murder us all in their seething, buzzing swarms.

The behind-the-scenes story behind this panic was that honey bees were apparently transported from Africa to Brazil in 1956, but then cross-bred…and made more dangerous.  A few of the new, more dangerous Africanized honey bees escaped from captivity in Brazil and were  -- during the Carter Administration -- making their relentless way for the Texas border.

The legend went that if the killer bees reached our country, America would only survive another ten years before Bee-mageddon occurred.

Given this creative (and let’s face it, sensational…) backdrop, the 1970s quickly proved the great era of killer bee movies and TV movies, including The Killer Bees (1974), The Savage Bees (1976) and Irwin Allen’s epic fail, The Swarm (1978).

Cult television was not immune to the killer bee fad, either, and soon this threat from south of the border was informing episodes of many popular American TV programs.

In 1980, killer bees even combatted The Incredible Hulk in the episode “Prometheus.”

By the 1990s, bees, if not actually killer bees, became a crucial element in The X-Files’ global conspiracy.  There, unlucky bees carried a deadly alien contagion in their stingers, and during “colonization” would infect mankind.  These bees appeared in such fourth season episodes as “Herrenvolk” and “Zero Sum” (as well as The X-Files: Fight the Future in 1998).

Bees of all stripes have long made convenient villains in cult television history.  They have been involved with a meteor freak of the week on Smallville (“Drone”), and even went to space in The Starlost’s “The Beehive”) in 1973.  A seductive Queen Bee appeared as a deadly menace in both The Outer Limits episode “ZZZZZ” in the 1960s and in the early Monsters’ episode “New York Honey in 1988.

Today, the killer bee menace resides, perhaps, in its most appropriate venue, as comedy fodder.  The Deadly Bees (1967) was featured on Mystery Science Theater 3000, and bees have made important appearances on The Simpsons, Family Guy and Futurama.

Starting in 2006, the killer bees panic was replaced, largely, by a new global honey bee crisis: colony collapse disorder.  In short, honey bees were seen to be dying in incredible numbers, and scientists were not certain if those deaths were a result of cell phone signals, pesticide use of climate change.

So don’t be surprised to see the bees return to cult television in some new context or form soon.  Below, you can see the Killer Bees in all their glory, on The Incredible Hulk.

And here's a promo for NBC's The Savage Bees:


Finally, below you'll find a TV promo for The Swarm.