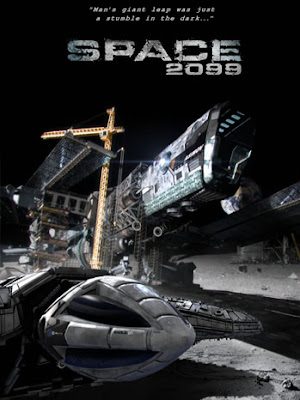 Several media outlets, including the Hollywood Reporter, are now reporting that HDFilms and ITV are working on a re-boot of Space: 1999 (1975 - 1977) called Space: 2099.
I'm assuming this news isn't a hoax, which was my first thought.
One of the talents involved in the project, Jace Hall, worked on the re-imagination of V that aired in 2009 and 2010.
From the press release:


"Science fiction is a powerful format capable of visualizing the human condition in thought-provoking ways," said HDFilms president Jace Hall, who will spearhead the effort and serve as an executive producer. The project is in the development phase and has yet to be shopped to networks.
"While we are indeed re-imagining the franchise and bringing something new and relevant to today’s audiences," continued Hall, who recently revived V at ABC, "I feel strongly that some of the overall tones set by the original Space: 1999 television show represent an exciting platform to explore possibilities.”
Already tonight, I've been asked about my opinion of this news in many reader e-mails and tweets.  My response right now is surprise, but not necessarily horror.
If reviewing films and television series has taught me anything in the last seven or eight years, it's this:  take each remake, re-imagination and re-boot on its own terms.
Some may be good, and some not.
I do feel sad a bit at the news, but mainly because my friend and mentor Johnny Byrne worked so long to see Space: 1999 continue, and he passed away before he could be involved in real terms on this new project.  I would have loved to see Space: 1999 resumed under Johnny's auspices, but that's something that will never happen.  Right now, this series producer would go a long way towards proving noble intentions by retaining Christopher Penfold in some capacity, I would suggest.
Since I was seven years old, I have dreamed about continuing Space: 1999, as many fans have.  I have written novels based in the series universe, which was that dream made manifest.  But as much as I love that universe and will continue to love it, I also realize that Space: 2099 can't be the EXACT same TV series as Space: 1999 -- the world is no longer in the same place as it was in 1975.   For the new series to work, it must speak to who we are now, not to the kids we were thirty years ago.
So my opinion?   It's too early to tell what Space 2099 will be, but I firmly believe -- as I always have -- that Space: 1999 as a concept possesses tremendous value, and has a lot of life left in it.  I've written these words before, but 1999 is not an expiration date.   The conceit of space as a place of mystery and terror -- a realm we are psychologically unprepared to experience -- remains a potent one.  A new series could mine that territory rather effectively.
And one last thing: there are no real space operas airing on television right now.  I miss the genre, and Space: 2099 is different enough from BSG, Star Trek and Stargate that the concept, if intelligently handled, could really catch fire.
Whatever his unique flaws, Newt Gingrich's comments last month about a moonbase got people talking about space exploration again, and his words certainly made me wonder why our politics have grown so small; why discussion of a revived space program must always be met with guffaws and denigration.
Science fiction is about dreaming big, and maybe Space: 2099 is just the shot in the arm Americans will need to remember that the future can be "fantastic."  I certainly hope so.
How do I feel about a remake?    I want it to be great.  I hope it will be.
at February 09, 2012