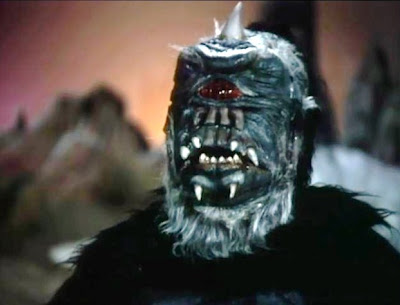 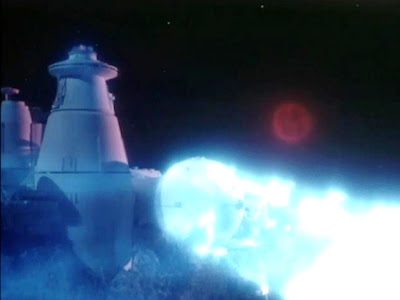 In the second episode of Jason of Star Command’s second season, “Frozen in Space,” Jason (Craig Littler) and his new friend, the amnesiac alien, Samantha (Tamara Dobson), head to a small planetoid that appears to be the source of a deadly freezing beam.


As Samantha and Jason seek out the beam’s source, Star Command nears destruction.  The base’s power systems frozen, it lurches dangerously towards a dwarf star…


On the surface of the inhospitable planetoid, Jason and Samantha meet “Tehor,” a monstrous minion of Dragos who is responsible for controlling the freeze beam.


Realizing that she may be Star Command’s last chance for survival, Samantha pretends to be an ally to Tehor and Dragos, and betrays Jason.  In reality, her actions are an excuse to get the duo into the base and to the all-important freeze beam control system.

Straight-forward and to-the-point “Frozen in Space” by Margaret Armen is buttressed by some outstanding special effects work, and a dramatic through-line that is actually pretty impressive in terms of children’s television.


In the case of the former, “Frozen in Space” features some dynamic miniature shots of Star Command under the burning shadow of a giant dwarf star.  There’s also a terrific composition here involving Jason’s Star Fire descending to the planetoid surface. 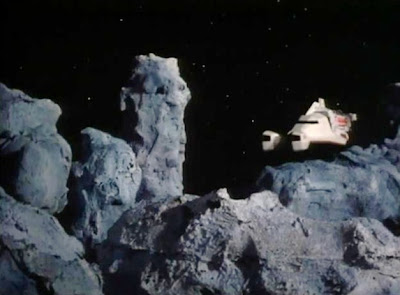 On the latter front, we get the newest chapter in Samantha’s on-going attempt to discover her own mysterious origin…and nature.  She wonders aloud: “what if my people are evil?”  Samantha wonders too, if she might be evil, on a personal basis.


Jason’s encouraging reply suggests that she can be whom she chooses to be.  In that answer, one can detect how a good message is being transmitted to the kiddies out there in TV land.


It’s not too heavy-handed, but Samantha’s plight reminds the viewer that people should be judged by the content of their character, not by stereotypes or other external factors which may not truly consider the measure of a man, or woman.


Samantha also claims this week to be a person from a race called “the Capillos.”  I don’t remember if that moniker recurs or not in future episodes…

Other than the nice character development about Samantha proving to herself she is not evil in nature, “Frozen in Space” is a pretty rudimentary narrative affair with captures, escapes, and more captures.  My friend Mateo Latosa, editor at Powys Media, calls this brand of story a “run around.”  The characters run lots of places, rescue each other, get captured, and then defeat the villain…but not much meaningful actually happens.   The pure movement and busy-ness of the enterprise distracts you from the thematic emptiness.  The original Dr. Who, in the early years, did a lot of these “runaround” stories, and after a while they certainly grow tiresome. 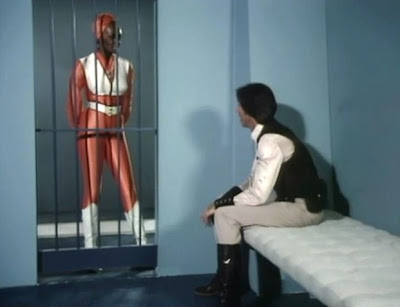 Here, Jason of Star Command seems more obsessed with action than interesting sci-fi storytelling: Jason smashes the freeze beam control panel by throwing a chair at it!  Not exactly a high-minded solution, though it certainly gets the job done.

Besides the narrative’s general lack of ingenuity, “Frozen in Space” features quite possibly the slowest, worst-aimed paralysis beam in TV history.


Samantha and Jason (and WiKi) all attempt to avoid the ray, yet somehow manage to outrun and pivot around the bloody thing.  Dragos needs to upgrade his technology or something.

Probably the biggest disappointment of the week is that Jason and Commander Stone don’t get to interact, and continue their contentious process of coming to understand one another.  Stone is trapped on Star Command with Parsafoot, and Jason is away on the planet, so there aren’t many character fireworks.


But, of course, "Frozen in Space" is aimed at kids, not at adults seeking thematic complexity.  Hopefully things get a little more fun and elaborate next week...


Next episode: "Web of the Star Witch!"