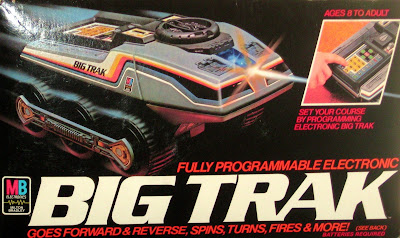 On the cusp of the futuristic 1980s (!), Milton Bradley's electronic toys seemed truly amazing and forward-looking.  The toy company created the Star Bird (and later, Star Bird Avenger), as well as its nemesis, the Star Bird Intruder.  And, of course, MB created Big Trak, the "fully programmable electronic" vehicle.

As you can see from the box photos, Big Trak is a big, land rover-type vehicle, one with a nice futuristic sheen.  The craft is sleek and it looks bad-ass.  On the dorsal side of the tank is a rectangular computer panel, fully programmable.  As the box establishes: 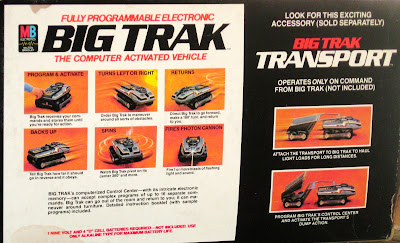 "BIG TRAK's computerized Control Center -- with its intricate electronic memory -- can accept complex programs of up to 16 separate commands.  Big Trak can go out of the room and return to you; it can maneuver around furniture.  Detailed instruction booklet (with sample programs) included."

So Big Trak could "respond to your commands" and the box invites kids to "watch Big Trak perform!  Goes forward and reverse, turns, spins, and fires."

An accessory (sold separately, naturally) was the Big Trak Transport, which could be atached to Big Trak to "haul light loads for long distances."  You could also deploy the transport as a kind of dump truck, which was very cool.

Alas, I don't currently have the transport...

But Joel and I have played with Big Trak up and down our driveway, across the street, and into the woods.  It's super easy to program, and the laser spotlight is pretty cool, especally in the dark.

I believe a company (in England?) recently re-released Big Trak for the collectible crowd, but I'm not sure.  One thing I am sure of, though: this is a toy that really holds up.  Our Big Trak has been around for over thirty years and all the functions still operate perfectly.

Also, as a side note, Big Trak has several brief cameo appearances (box and toy) in this week's The Films of 1982 feature, Tobe Hooper's Poltergeist.
at February 01, 2012

Email ThisBlogThis!Share to TwitterShare to FacebookShare to Pinterest
Labels: 1970s, collectible of the week