As I wrote here on Monday, Lance Henriksen's Frank Black is our sturdy anchor in the great Chris Carter series, Millennium (1996 - 1999).

Over a span of three seasons and more than sixty-five episodes, this remarkable dramatic program accommodated many different brands and styles of storytelling -- including some unexpected lunges into comedy -- and the face who always held it all together belonged to Lance Henriksen.
Selecting just five favorite Frank Black moments is not an easy task because Henriksen and the series writers/producers/directors gave us so damn many of 'em in those three wondrous seasons.
Anyway, these five "great Frank Black moments" come in no particular order, and from all three seasons of the series.
1. "Pilot" Frank introduces his family to their perfect yellow house. 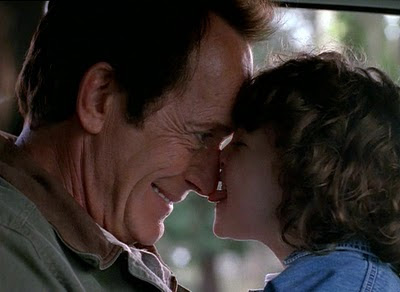 As the series opens, Frank Black and his family relocate to rainy Seattle, but -- caring spouse and supporting father that he is -- Frank has made certain that their lives have at least a ray of sunshine in them.
Here, he shows them their gorgeous new home, a shining yellow house far away from the repellent darkness of Frank's work.
In a beautiful, spontaneous moment, little Jordan (Brittany Tiplady) is so excited to see the new family home, she licks her Daddy's nose.  It's an innocent, childish gesture (lensed in close-up) that really cements the Black family bond, and reveals the closeness between father and daughter.
2. "Lamentations"  Frank is in the wrong place at the wrong time. 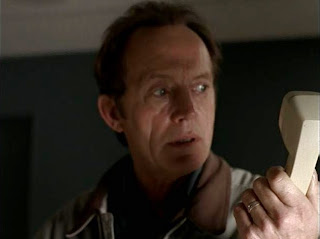 Far away from the yellow house in Seattle, Frank Black deciphers a clue that suggests Evil Itself (in the form of Sarah Jane-Redmond's Lucy Butler), is on the way to "visit" his imperiled family.  And this time, Frank is too far away to help them.
The expressions that cross Frank's face as he attempts to figure out what is happening, and if his family is safe, probably represent the closest thing to panic we ever see on the guy.
If something can drive the solid, even-tempered, brave Frank Black to that unprecedented level of concern...watch-out.

And sure enough, when Frank's friend Bletch enters the yellow house during a storm -- now a yellow house of horrors -- be afraid.  Be very afraid...
3. "Jose Chung's Doomsday Defense:" Don't Be Dark, Frank. 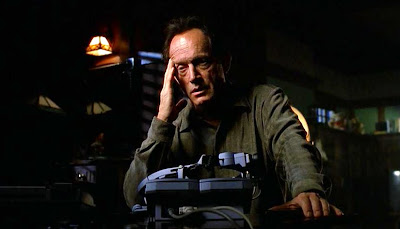 In this caustic satire of Scientology (called Self-osophy in Millennium), Frank attempts to ferret out the identity of a killer by using a copyrighted Self-osophy self-help technique.
With a tape entitled "How Not to Be Dark" and a gimmicky head set, Frank engages in "Easy Visualization Therapy," and is asked by the taped voice to "picture something that disturbed him."
At that exact moment, the episode cuts ironically to a blood-curdling montage of every grisly vision from Millennium's first season and-a-half.  Horrified, Black rips off the head-set and nurses the mother of all headaches.  But the point is that Frank doesn't run from the darkness or try to deny it.  He faces it.  He isn't about "self" (or Self-osophy) and sometimes we all genuinely need to "be dark."
4. "Luminary:" Frank Black to the rescue. 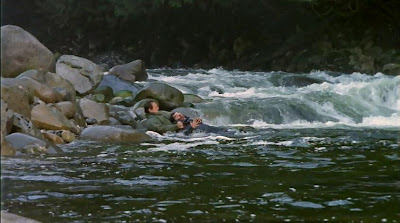 An exhausted, freezing Frank Black carries an injured young man named Alex through the hostile, wooded terrain of wild Alaska in the uplifting "Luminary."
When the young man's stretcher tilts and dumps the boy in the river rapids far below, Frank -- without batting an eye or hesitating a second -- jumps in after the boy.

This courageous and self-less act represents Frank's ethos in a nutshell.  It's that father instinct.  It's that tenacious unwillingness to give up on someone he has sworn to protect.  He will literally do anything to help another human being, even at great risk to himself.
5. "The Sound of Snow:"  "Every day, I want to be with you." 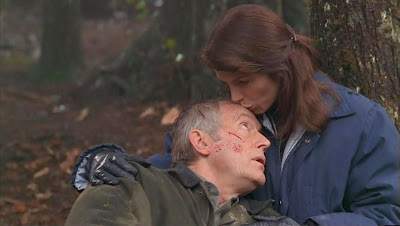 Alone in the wild again, Frank is badly injured and experiences a vision that, in some small way, forces him to face his greatest loss.
This moment reveals to us Frank at his most vulnerable and emotional, and does so with the one person that he can be so vulnerable with, his beloved Catherine (Megan Gallagher).
It's a haunting, affecting moment, because we see beneath Frank's strong facade and see -- truly see -- his sense of pain and loss.  This moment always moves me, every time I watch "The Sound of Snow."  Frank faces guilt, loss, sadness and a future that isn't what he hoped it would be.
at May 05, 2011