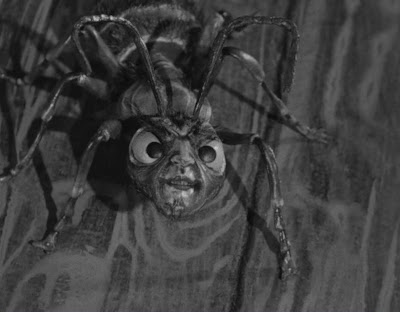 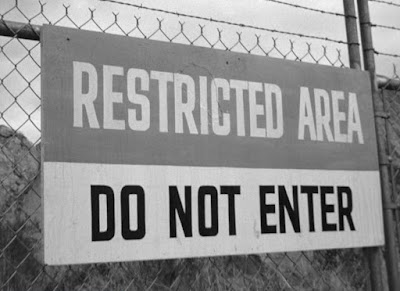 You've just adjusted the channel on your (b&w) TV set to ABC. The Outer Limits is airing, and this week's "transmission" from the Control Voice involves the creepiest alien creatures you've ever seen: skittering, howling, relentless, big-eyed ants known as Zantis.
And In the final act of this Joseph Stefano-penned nightmare, the damned Zanti Misfits are EVERYWHERE.

They're crawling down walls, attacking American soldiers, and jumping -- literally -- out of the woodwork of a hotel-turned military installation in Morgue, CA. So...it's pretty much an unstoppable onslaught of insectoids.
In vetting this harrowing denouement, the classic TV anthology truly lives up to producer Stefano's famous mission statement: "The viewer must know the delicious and consciously-desired element of fear..." (Gary Gerani. Fantastic Television, Harmony Books, 1977, page 57). 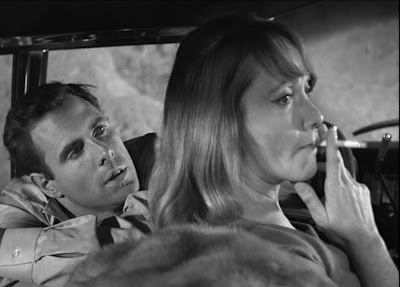 The Zanti Misfits encounter two small-time Earth criminals, played by a very young Bruce Dern (!) and Olive Deering, upon landing in the California desert. This unexpected incident could cause the destruction of the Earth since the Zanti insist on privacy for the prisoners. And it is learned very quickly that Zanti have no qualms about killing human beings. 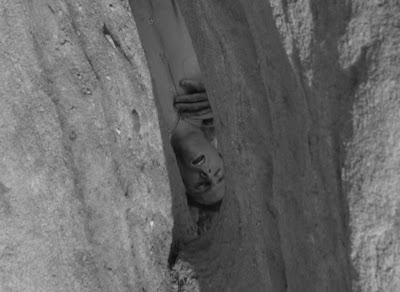 In the end, the Zanti escape their prison ship with their guards and overrun the town of Morgue, now the U.S. "warden" post for the prisoners. The U.S. Army and an inexperienced military historian, Stephen (Michael Tolan) fight for their lives, and it's utter chaos in the aforementioned final scene. The Zanti are finally taken out with fire, with rifles...and with good old-fashioned bug foot-stompin.' 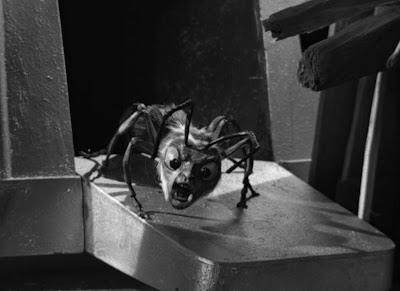 As a book-end to this mysterious opening shot, "The Zanti Misfit's" final composition reveals another sign, this one cast-off on the ground, disordered and revealing the name of the desert town: "Morgue."
Of course, the hotel and surrounding lands have been turned into a literal morgue, at least for the Zanti...so the sign transmits, with much gallows humor, a sense of truth. The bottom-line is that this TV drama from 1963 features, in some important ways, a deeper sense of classic film style (and film grammar) than many of the major motion pictures produced today.
In between these book-end "sign" shots, the episode finds time to orchestrate a terrific upside-down, claustrophobic of Bruce Dern surrounded by rock, expressing well the idea of death. And -- for 1963, anyway -- the Zantis are rendered pretty convincingly through stop-motion photography, especially in close-up. 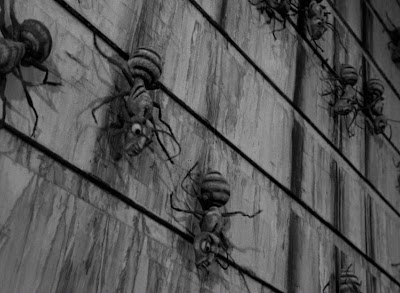 These malevolent creatures are shot well too. Horn's camera frequently zooms-in jarringly on close-ups, and gives the audience full-on, disturbing views of these little buggers howling and complaining about their treatment and predicament. When a chase sequence in the desert is presented, -- with the Zanti pursuing Olive Deering's character -- Horn goes with a hand-held camera, and the sudden herky-jerky nature of the camera really gets the blood boiling.
I know Leonardo Di Caprio is currently working on a feature-length remake of The Twilight Zone. Well, if The Outer Limits ever gets the same silver-screen treatment, "The Zanti Misfits" would be a prime candidate for inclusion in the project. The alien villain of this installment is extremely memorable (and disgusting...) and the central scenario is tense and involving. Frankly, I still freak out a bit watching the last five minutes of this episode.
Believe me, if you watch "The Zanti Misfits" in bed and in the dark, you'll be nervously scanning the floor (and your blankets...) for signs of these nasty, malicious bugs. Recently, the great blogger Trick or Treat Pete at Deadly Serious listed "The Zanti Misfits" as one of the things that perpetually give her the willies.