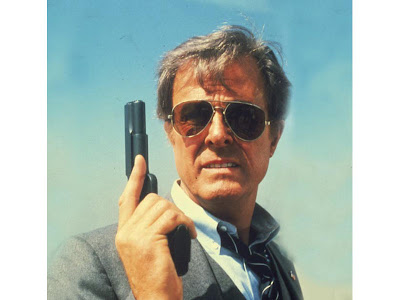 Only a week or so after losing the talented Peter Graves, another great cult-TV actor who became famous in the 1960s has passed away; this time the incomparable Robert Culp.

Culp is perhaps most well-known -- also like Graves -- for his lead role on a popular espionage series, I Spy (1965-1968), for which he was nominated for an Emmy as best actor. His co-star was Bill Cosby.
But Culp is also beloved to Generation X'ers like myself for his role as the surly but heroic F.B.I. agent Bill Maxwell in The Greatest American Hero (1982-1983).
In that ABC series, he joined William Katt and Connie Sellecca to form a heroic, funny, charming triumvirate. On Hero, Maxwell often talked about "the scenario," a catchphrase for the mission of the week. Also, Maxwell often goaded the reluctant superhero Ralph (Katt) into action by telling him "this is the one the suit was meant for." Despite the repetition of these remarks week-to-week, episode-to-episode, Culp always made them feel fresh, and more than that...funny.

In addition to starring on The Greatest American Hero, Culp also wrote episodes of the superhero series, including season two's "Lilacs, Mr. Maxwell" (April 28, 1982) and the third season installment, "Vanity, Says the Preacher."

Culp also guest-starred in two of the greatest episodes of The Outer Limits (1963-1964) ever produced. First, there was "The Architects of Fear," about a dedicated scientist and pacifist (Culp) who altered his very biology to appear as an invading alien (a Thetan) and thus unite the warring factions of Earth. In Harlan Ellison's "Demon with a Glass Hand," Robert Culp played Trent, a man with the power to save the future...if only he could remember who he was.

Culp also appeared on Alfred Hitchcock Presents, The Man from U.N.C.L.E., Get Smart, and Lois & Clark: The New Adventures of Superman. He even appeared in one of the finest horror pilots ever produced, Gene Roddenberry's spooky Spectre (1977). Outside of the genre, Robert Culp starred in the theatrical box office hit, Bob & Carol, Ted & Alice (1969).

I've always admired Culp's approach to creating his memorable characters. Even when he played a straight-up hero, like Bill Maxwell or Kelly Robinson, Culp always gifted those personalities with his strong sense of humanity. This vision included fallibility, temper, attitude and a core of decency. Mr. Culp will be sorely missed, but his range and talent is preserved in his fine performances.