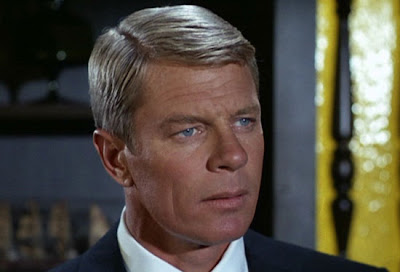 The AP is reporting this morning the death of Peter Graves, the silver-haired actor who brought American agent Jim Phelps so memorably to life on Mission: Impossible (1966-1973) and its 1988-1990 follow-up. He was 83-years old.

I've been watching Seasons Two and Three of Mission: Impossible over the last several months, and become quite enamored with Graves for this classic portrayal of a TV icon. As the leader of the IM Force and the defender of America against plots by foreign dictators and the domestic Syndicate, Graves was a kind of silver-haired, athletically-built American God.

Graves once described his character as an "invulnerable genius," but Phelps also boasted a distinctive, human side, revealing a true loyalty to his team members in episodes such as "Exchange" (during which Barbara Bain's Cinnamon Carter was captured), and even falling for a double agent, played by Joan Collins in "Nicole." Beneath the invulnerable genius beat the heart of a very human man. Phelps even managed to bring a subtle sense of humor to the character.
But Mission:Impossible was first and foremost about the job; about completing the mission. And Phelps was a scion of America power in the turbulent 1960s: forever loyal and forever patriotic. He didn't ask questions about his covert espionage missions, he just accomplished them and moved on. There was no cynicism in dashing Jim Phelps, and no cynicism in the portrayal by Graves, either. Graves' Phelps character projected American power with grace, charm and without attitude.

Peter Graves was also well-known outside of Mission: Impossible for a variety of prominent roles. He memorably lampooned his heroic stature and demeanor as the pilot in disaster-movie spoof, Airplane (1980) and its sequel, Airplane 2: The Sequel (1982), for instance.
Throughout his career, mostly in the early years, Graves also appeared in low-budget science fiction films such as Killers from Space (1954), and It Conquered The World (1956). In the 1960s and 1970s, he was a staple of science fiction television, appearing in such series as The Invaders, Fantasy Island and Buck Rogers in the 25th Century.

Peter Graves, much like William Shatner or Charlton Heston, is one of those classy 1960 actors who always projects strength and decency in his varied roles, and consequently has been viewed as a role model by many youngsters of Generation X. My condolences go out to Mr. Graves' friends and family on this sad occasion. I hope those in mourning can take some solace in the fact that, thanks to DVD, his life's work is constantly being discovered and re-discovered. Seeing Mission: Impossible again this year has been a revelation for me -- it's a TV series of consistent high-quality, tremendous intelligence and a lot of suspense -- and I have come to admire Peter Graves more than ever.
at March 15, 2010