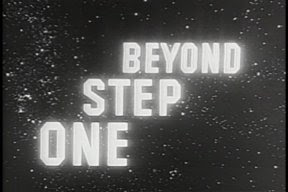 “What you are about to see is a matter of human record. Explain it? We cannot. Disprove it? We cannot. We simply invite you to explore with us the amazing world of the unknown, to take that One Step Beyond…”

In just a matter of days, CBS will unveil the official DVD release, One Step Beyond: The Complete First Season. Surprisingly -- especially for a series of this vintage -- this upcoming release represents the first time in history that One Step Beyond has been given such treatment. In the past, this beloved paranormal anthology of the Golden Age (which was broadcast starting ten months before The Twilight Zone...) has languished in the public domain…and all previous DVD releases have been, well, scatter shot in terms of visual and sound quality.

These fifty-year old episodes of One Step Beyond have been lovingly, painstakingly, re-mastered by CBS. Additionally, the DVD release features original episode trailers and an alternate version of the series’ pilot, "The Bride Possessed."

So today, given the occasion of the new release, I want to celebrate One Step Beyond’s long-awaited return to the pop-culture by gazing back at one episode; an exemplary half-hour installment that strongly exemplifies the spooky program’s central claim. Specifically, that many of the paranormal incidents dramatized in various episodes were actually based on “fact.”

In this case, “fact” might loosely be interpreted to mean documented reports, eyewitness testimony or even an unswerving fidelity to the paranormal literature/research of the day. As the late John Newland told me during an extensive phone interview in 1999, all the episodes had to feature proof, either anecdotal or documented. A technical adviser, Ivan Klapper, was also retained on the program to assure accuracy.

The episode I like to point to in this matter is titled “Night of April 14,” written by Collier Young and directed by John Newland. You’ll find this one on the upcoming First Season release too, and it concerns a young couple that books a honeymoon trip on the maiden voyage of the Titanic in April of 1912.

Leading up to the sea journey, the bride-to-be, Grace (Barbara Lord) dreams of drowning in icy water. Ultimately, she survives the sinking, but her husband (played by a very young Patrick Macnee) dies in the turbulent seas. Also, "Night of April 14" involves examples of precognitive or psychic awareness of the Titanic’s sinking around the globe. For instance, a Methodist minister in Canada reportedly changed his hymn of the evening of 04/14/12 to "Pray for Those in Peril on The Sea" after a vision of the incident. Also, a magazine cartoonist sketched specifics of the Titanic disaster well before the news of the disaster came.

Airing originally on January 27, 1959, the black-and-white “Night of April 14” remains creepy as hell today because it ends with a real kicker. Host John Newland approaches the camera with that trademark, cat-ate-the-canary grin and speaks of a book, a “novel" written in 1898 (14 years before the Titanic disaster...). Our "guide to the world of the unknown" then claims that this book -- this work of fiction -- accurately predicted many specifics about the 1912 disaster.

When I wrote An Analytical Guide to TV’s One Step Beyond in 1999, I knew that this story was a turning point of sorts. If I could find that book and verify Newland’s claims, then the show's argument that it was based on “fact” was at least plausible. On the other hand, if the prophetic novel was but a calculated fiction created for One Step Beyond, then I knew that any claim of veracity was likely to be bunk.

Well, the book existed (and is still extant), and I've written about it on the blog before (in relation to The Lone Gunmen, I believe.). The novel is titled Futility and it was written by a novelist named Morgan Robertson. Futility’s plot concerns the maiden voyage of the largest ocean liner ever built. On an April night – in the story – this fictitious vessel (described in the text by the adjective “unsinkable”) strikes an iceberg and – because there are not enough lifeboats aboard – over one thousand passengers die in freezing waters.

The name of the ocean liner in Futility is…Titan. In fiction, the Titan could travel 25 knots; the same speed as the real Titanic. In fiction, the Titan was 70,000 tons to Titanic's 66,000 tons. But the big similarities are plain: a disaster on an April night, an "unsinkable" ship, the striking of an iceberg...and over 1,000 casualties. Plus the similarity in vessel names. One or two such similarities you could easily write off as coincidence...but the exact month of the incident? The ship's top speed? The reason for the huge number of casualties? To turn a phrase, it boggles the mind...
Watching John Newland describe (accurately) the book Futility and the novelist's accurate prediction of the Titanic disaster (to the moody strains of Harry Lubin's atmospheric score..), you'll get a serious case of the creeps. My research, I should also point out, verified other aspects of "Night of April 14," particularly those claims of a "psychic web" around the tragedy. A professor at the University of Virginia, for instance, collected nineteen documented reports about the Titanic sinking. Six were of the precognitive variety, like the one experienced by the heroine, Grace, in "Night of April 14." One report involved a crew member on Titanic who fled the ship because of persistent dreams of drowning.

The remarkable thing about One Step Beyond is that "Night of April 14" is not alone in attempting to accurately dramatize reports of paranormal incidents. "The Day The World Wept: The Lincoln Story" gazed at President Lincoln's recurring visions of his own demise while in the White House. "Where Are They?" involved a strange story about rocks falling from the same sky -- every day at the same time -- in the city of Chico, California. The events were reported in the San Francisco Examiner in March of 1922, and so on.

I'm a confirmed skeptic. I don't much care for Ronald Reagan, but I am often reminded of his warning about dealing with the Russians: "Trust, but Verify." That's sort of how I feel about the paranormal (and indeed, about God). Yet I find these spooky old campfire tales (many with corroboration from percipients...) positively tantalizing. Perhaps that's because One Step Beyond always featured great acting, atmospheric direction, moody black-and-white photography and that haunting Lubin score. The series sweeps you away in these strange visions and the proof it offers up (usually in the closing narration....) is just enough to give you pause; to trouble your peaceful slumber.

So if you're in the mood for some spine-tingling strangeness from the Golden Age of Television, check out One Step Beyond, available on DVD in September for the first time ever. I hope you'll purchase the set, especially so we can get season two and season three released in the months to come. Because -- if you didn't know -- the third season includes the notorious "documentary" episode entitled "The Sacred Mushroom" in which host Newland samples peyote while the camera rolls. You just have to see that episode to believe it...
at September 02, 2009

Email ThisBlogThis!Share to TwitterShare to FacebookShare to Pinterest
Labels: cult tv flashback, One Step Beyond