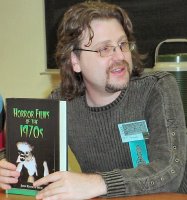 Hey everybody, last July, Kathryn and I traveled to Williamsburg, Virginia for an evening so I could delivery my presentation about superheroes on film and television at the Williamsburg Regional Library. On that same evening, we met this great young fellow named Kevin Flanagan, who is the co-owner/operator of Virtual Fools (which you'll see is included in my links on the right of the page.) Kevin is a student at William and Mary, and a film lover extraordinaire. He's also been helping me out a lot lately with tons of stuff, especially research.
Anyway, after the show that night, we all went to Starbucks, and over coffee Kevin conducted an interview with me about my career. His questions were great. My answers were kinda rambling, but mostly intelligible.
Now the transcript of the entire conversation is up at The Virtual Fools. Check it out.
Here's a sample.

KF - Why did it take people (scholars and critics) so long to understand films like The Last House on the Left and The Texas Chainsaw Massacre? Could they only be understood when distanced from their direct historical contexts?

JKM - In a sense they were just ahead of the curve. Criticism compares to what has come before. What does a critic do when they are confronted with something new?

JKM - They run away, they dismiss it, and they dislike it. The Texas Chainsaw Massacre is one of the ten most important film titles in American history, not just because of its subject matter, but because of how it is structured. The film is more shocking than Psycho, because there is no learning or movie decorum. The same with The Last House on the Left. You go into the theater and there are no rules. No movie stars…

JKM - There is the feeling that anything could happen to you while watching this movie. I don't think that critics could handle that. For The Texas Chainsaw Massacre, most people couldn't get past the title. Critics walked out of these movies. They were not staying and engaging them on their own terms. As a critic I often now reflect on this. A lot of critics often can't do that when they are confronted with something new.