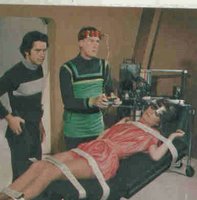 Ugh. From one of the best Logan's Run episodes ("Crypt") to one of the absolute worst. In "Fear Factor" -- a title that presages a popular reality TV series of the 21st century -- our intrepid heroes Logan, Jessica and REM run across a beautiful estate in the middle of nowhere, and also a strange woman writhing around on the grounds in mortal fear. She seems to be suffering from what REM diagnoses as "mind-numbing trauma."

Anyway, Logan, REM and Jessica return the woman to the facility. It's a mental hospital where the lead psychologist, Dr. Rowan is a psychopath himself. As the leader of the "Inner Circle," he controls all the inmates (here known as "menials") as well as the doctors at this "convalescent" sanitarium by forcing upon them virtual lobotomies, crushing their "militant" independence with his own thoughts. Meeting Jessica and diagnosing her as a revolutionary, he feels she's a natural for the procedure. Logan and REM attempt to intervene, but are dropped into a basement survival track, an obstacle course which includes a wind-tunnel and an area where fireballs are hurled at them. When they survive these trials, Rowan attempts to recruit Logan, but he'll have no part of it.
Finally. Logan teams with another psychologist, Dr. Paulson (The Fantastic Journey's Varian, Jared Martin!) to topple this odd society. He does so not a moment too soon, because Dr. Rowan wants to raise an army of re-programmed individuals...literally, since he has a machine that can accelerate the growth of any human. (Don't ask...)

Anyway, at the end of the day, REM states my feelings about this episode perfectly. "I've had enough of this place," he declares. Me too, REM. Me too.

My problem -- as I've elaborated upon before -- is this recurring and absurd notion that some little enclave of society like an insane asylum could continue to exist unimpeded after a nuclear war. After hundreds of years. Where does this asylum generate its power? (Remember, there's no power grid). Yet this facility has heat; it has light; it is technologically advanced and it looks exactly like a 20th century asylum...out in the middle of nowhere. I just find that these kind of stories are unsupported from the standpoint of rationality. Where does this clinic get patients, anyway? From runners who happen out of the City of Domes once in a blue moon?

Doctor Who did a story about a society based on an insane asylum in the 1980s called "Vengeance on Varos," but it actually commented in satirical fashion about our society (and our TV, of all things...). I'm not really sure what "Fear Factor" is about, or what it means. But heck, at least it's nice to see Jared Martin again...
at November 06, 2005