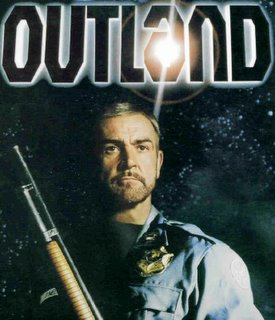 This was a movie that got trounced at the box office when it was first released in 1981. Despite that fact, it remains one of my favorite genre films from the decade, and I can pop it in the laserdisc player anytime and enjoy it all over again.

Outland stars Sean Connery as Marshal O'Niel, a cop who has just been assigned to the Con-Am 27 installation on Io, the third moon of Jupiter. Seventy hours from the the nearest space station, this mine boasts a population of 2,144 workers, and a supply shuttle visits once a week.
While O'Niel deals with his wife's (Kika Markham's) choice to take their son and leave the grim installation, there's also a rash of worker suicides. One miner rips open his atmosphere suit while on the surface, convinced that he is being attacked by spiders. Another worker walks into the airlock and mining elevator with no suit whatsoever...and leaves behind a boiling, bloody mess.

O'Niel is curious - perhaps even suspicious - about these deaths, and learns from the post's dissolute doctor, named Lazarus (an outstanding Frances Sternhagen...) that there have been 24 such "suicides" in the past six months. O'Niel doesn't buy that explanation (for one thing, neither miner left a note...) and learns that the station's administrator, Sheppard (Peter Boyle) is actually running an illegal drug operation. He is using two workers, Spota and Yario to pass the drugs about the population. The synthetic narcotic, an amphetamine, makes workers do their jobs much more quickly: 14 hours of work in 6 hours. Of course, this means a higher quota; which means the business is more profitable for Sheppard and his bosses. but there's a down side, the drug also "fries the brain" and turns normal men psychotic.

O'Niel interferes with the drug-running operation, but learns he was given the assignment as Federal District Marshal because it was expected he wouldn't rock the boat. He doesn't like that arrangement, and so confronts Sheppard. Sheppard responds by sending professional assassins to kill the meddling O'Niel. Unfortunately, this frontier world is a place where nobody wants to stick their neck out, so O'Niel must face the killers alone...and the next shuttle is arriving soon!

Outland is a perfect example of just how important production design remains in the crafting of an effective and intelligent science fiction film. Here, the moviemakers take special pains to create a tangible sense of place, a futuristic frontier town that, according to Sheppard "is just like any other mining town." Only here, the frontier is even more dangerous than one can imagine, and we see several gory de-pressurizations in the movie. But more importantly, the environs of this futuristic outpost on Io are completely and totally believable in virtually aspect. Since space (and atmosphere...) are at a premium, miners sleep in little compartments stacked several high and rows deep. These compartments are not much larger than a casket...

Likewise, every detail, down to the hookers in the Leisure Club and Sheppard's spacious office, reveal to the audience something important about this location, and how it affects the human psyche. And delightfully, this is all visual, not some expositional dialogue. I remember the ad-line for Superman: The Movie. It was You'll Believe a Man Can Fly. The ad-line for Outland could have very well been "You'll Believe We Can Live in Space..."
At about the fifty minute point of Outland, director Peter Hyams ramps up the pace and directs an exquisite and sustained action sequence that sees O'Niel in pursuit of Spota. Lensed in long shot (and with few cuts, at least at first), this chase is not only exhilarating, it lends reality to the locale. We see Connery chase his prey from locker room to sleeping quarters, to cafeteria to kitchen with precious few cuts. Thus a sense of space is preserved, and again -- we believe this is all real. There in the kitchen, the fight ends brutally (with a butcher knife and a pot of boiling water), and you're on the edge of your seat. In many ways, this chase/fight is the film's high point, a crazed, accelerated tour of a futuristic installation that is utilitarian, depressing, and completely believable as an extrapolation of future technology.

One of the things I admire most about Outland is that it concerns human vice. So many stories set on other worlds view humans as perfect (like Star Trek), focus on confrontations with monstrous extra-terrestrials (like Alien) or deal with a giant scope, like a galactic war (Star Wars). All of those franchises are great, and I love them all dearly, but I also appreciate the uniqueness of Outland: that it concerns human characters in space, not phantasmagoria. It's makers didn't feel the need to include any other fantasy elements, and the film is all the stronger for its singularity of focus. It is what is is: a personal confrontation on a frontier, and that's why so many critics at the time compared it to the Western genre. There's even a ticking clock here, right out of High Noon.

I always like to point this out in great science fiction or fantasy films, but everything about Outland had to be created from scratch. Every set had to be built from the ground up. A believable world had to be imagined, and then erected with a fine eye towards detail. The resulting film is immersive and tense and involving, (in no small part because of Connery's performance, either), and that just means that the production designers and art directors did a magnificent job.

I'm old enough to remember how shabbily Outland was received by critics both in and out of the genre. Today, most of those complaints don't really hold up. For instance, I remember one prominent science fiction author of the day expressing disappointment that the film ends with O'Niel simply punching out his enemy, Sheppard. This critic complained that it was an anti-climax, and sorely disappointing not to have Sheppard murdered by the hero. Well, all I can say is that this writer must have taken a potty-break in the film, or not paid attention. Because when Sheppard contacts his bosses to acquire assassins, they warn him in no uncertain terms that "the next guy coming for someone will be coming for you." In other words, by defeating Sheppard's assassins and exposing the drug ring, O'Niel has already beaten his enemy. Sheppard's own allies are going to kill him, so O'Niel doesn't need to. I find this resolution a much more elegant climax, rather than simply having O'Niel blast Sheppard with a shotgun. Why? O'Niel could have done that at any point in the story. This isn't really a story about O'Niel committing murder; it's a story about O'Niel's redemption, and his individual method for beating "City Hall." Better, I think, to leave Sheppard dangling on the hook, waiting to be offed by the very people he conspired with.

"Even in space, the ultimate enemy is still man," shouted the ad-copy for Outland, and today, I wanted to champion a film from the 1980s that is entertaining, funny, and created with an eye towards exquisite detail. The greatest thing about Outland is just what I noted above -- you can tune it in and immerse yourself in the futuristic, grimy and grubby "vibe" for 100 minutes, and feel that you've really and truly visited the future.
Blade Runner gets championed all the time for its texture and futuristic sense of "reality," but in its own unique way, Outland equals the glories of that (undeniably great) film.
at November 23, 2005