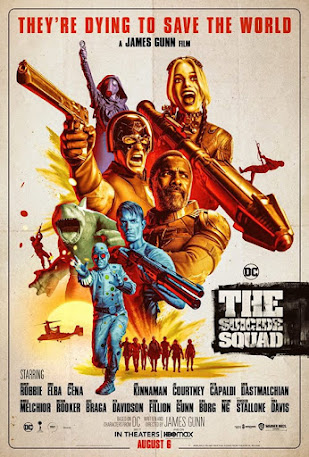 The third in The Suicide Squad saga (after the ’16 Suicide Squad and ’20s Birds Of Prey) acts more like a reboot than a sequel. Most of the original cast is either gone or make a quick cameo, and in their place are a slew of top stars (Idris Elba, John Cena, Sylvester Stallone) to accompany three leads from the first film: Joel Kinnaman as the team leader, Viola Davis as the callow Intelligence officer, and the main course, Margot Robbie as the delusional, psychotic anti-hero, Harley Quinn. Snatching a Marvel director, James Gunn (Guardians Of The Galaxy 1 and 2), the latest Suicide Squad has a more humorous vibe than the other DC films of this millennium, but still feels shallow when compared to their competitors.

A squad of hardened criminals including Quinn, Rick Flag (Kinnaman), and a coupling of characters from the first film (Jai Courtney as Boomerang), and fresh convicts (Michael Rooker, Pete Davidson, Nathan Fillion) land on a South American Island to tackle a new, vicious regime. While the team learns why they are named “The Suicide Squad,” another team sneaks in at another location to continue the mission. They include Bloodsport (Elba), Peacemaker (Cena), the walking, talking shark, King Shark (voiced by Stallone). The survivors of the first landing team up with their counterparts to stop the new illegal government from exploiting “Project Starfish,” a deadly, mind-controlling entity steered by “Thinker” (Peter Capaldi), an egghead with electric nodes sticking out of his noggin. The team discovers that the entity is more than an experiment, it’s a living organism bent on world domination (is there any other kind?) 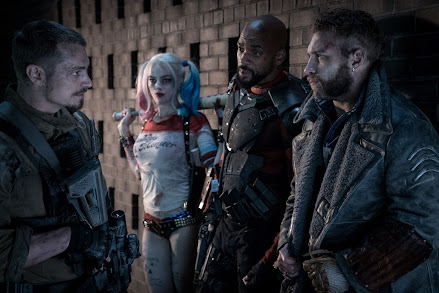 The Suicide Squad tries too hard to be shocking, irreverent, or original. Though extremely gory, with humans blown apart, pulled to pieces, and exploded, none of the deaths are creative enough to distinguish it from any other action film these days.  The camaraderie between the team feels thin, and many of the shots (heroes walk in slow motion several times – Thanks Tarantino for starting that cliché) have a ordinariness to them.

When Robbie is on the screen, it detonates. Though her character is wavering on the outskirts of reality, the actress invests layers of quirks and humor onto the certifiable, expert assassin.  Gunn animates the lunacy in her head, as flowers instead of blood flows from her victims. One solo take-down of enemies is a witty ballet of stunts, fake-outs, and female empowerment.

The other leads are fine and have moments, particularly powerhouse actor Davis unleashing rage upon her subordinates and Cena revealing his true motivations. Unfortunately, the villains aren’t interesting. Capaldi’s Thinker turns out to be an ineffectual blowhard. Joaquín Cosio plays your standard, third-world country dictator stereotype. John Diego Botto, a very talented actor, has titillating chemistry with Robbie, but his scenes are too few.

Too much monotony and not enough Robbie is The Suicide Squad’s biggest issue.  One of our biggest talents, Robbie lifts the entire film on her shoulders and sprints around the rest of the cast.  Had the film focused purely on her or found a way to transmit her energy to the rest of the film, the many scenes without her may not have dragged down the film.