V: The Series: "The Wildcats" 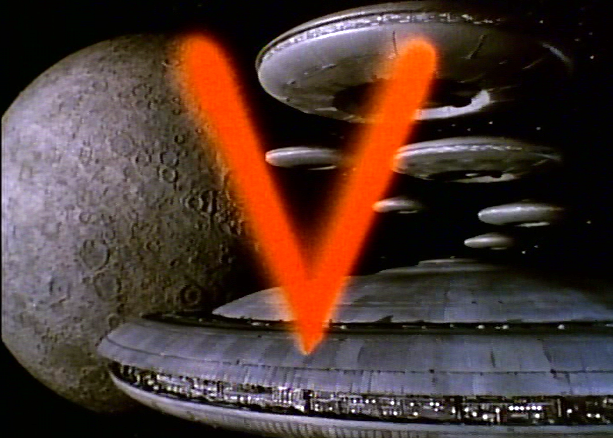 In “The Wildcats” Diana (Jane Badler) and Lydia (June Chadwick) conspire to point the finger of blame at the mothership’s pharmacist, Marta (Gela Jacobson) for the murder of Charles.
If they are successful, Marta will spend eternity with Charles’ corpse in a space-bound sarcophagus.
Meanwhile, on Earth, Julie (Faye Grant), Willie (Robert Englund), Elizabeth (Jennifer Cooke) and Kyle (Jeff
Yagher) are desperately combating an epidemic of diphtheria, but need fresh supplies of medicine to stop it.
A local gang of young resisters, the Wildcats, reluctantly offer assistance, but a traitor in their midst threatens everything.
Now Donovan (Marc Singer) must make a daring flight to Julie’s location to drop off the needed medicine, but Julie fears that if the mole in the Widlcats isn’t identified, a disaster will occur.
Meanwhile, a Wildcat named Ellen (Rhonda Aldrich) falls in love with Willie, unaware that he is actually a Visitor. He must tell her the truth, but it isn’t easy. 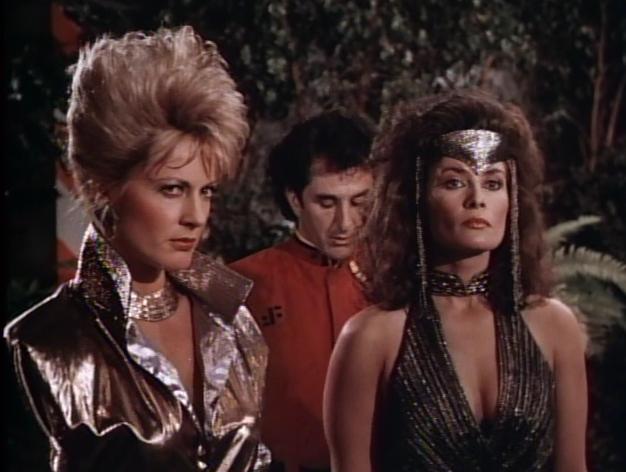 The fifteenth episode of V: The Series follows up on the pattern of last week’s installment, “The Champion.” In short, it features an underwhelming Resistance story and a delicious tale of intrigue with the Visitors.
This week, Julie is miraculously recovered from her neck-brace injury of last week, and is the central human character. This time, it is Mike Donovan who puts in a mere “guest appearance,” and is barely present.  This arrangement seems very much like a way to eliminate the characters’ former romance.  If they are hardly on-screen together, there’s not much time for them to interact meaningfully.  Similarly, the new pattern -- Julie as our star one week, Mike the next -- looks a lot like a schedule-saving measure, a way to lower costs, perhaps. 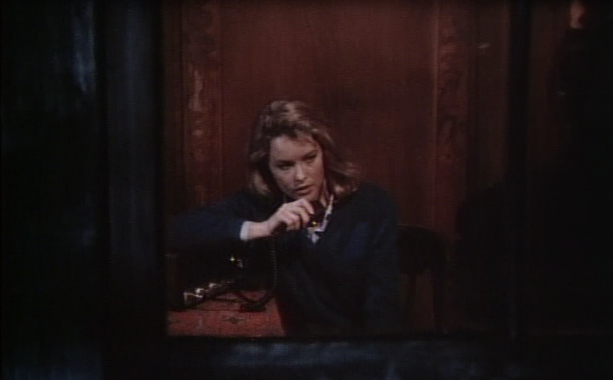 Meanwhile, the overall story, about a young gang of resistance members, the Wildcats, seems to mirror strongly the dynamic of the movie Red Dawn (1984).  There, high school students formed a resistance cell when Soviets took over their western town. Substitute the Visitors for the Soviets, and you get the premise of “The Wildcats.”
Still, two elements of this episode really stand-out, and deserve a mention.
First, Willie’s subplot with Ellen functions remarkably effectively as an allegory of gay men in America, and for 1985 network television, this is an outstanding development.
In particular, a beautiful woman shows interest in a handsome stranger she has met, Willie, and he must break it to her that he is “different” from other men she knows, and not suitable as a romantic partner or lover.
It’s true, Willie is an alien -- a Visitor -- and not a gay man, but the scene wouldn’t unfold differently at all if his nature changed in that way. He is an outsider who hides his inner-self from those around him, for fear of rejection and hostility.
So, very clearly, V: The Series presents an allegory for being in the closet in 1980s America, and again, this is simply staggering in terms of getting socially-conscious material past the network censors. Watching “The Wildcats” today there is virtually no other way to interpret the subtext of Willie’s story. And I should hasten, this kind of material is infinitely more interesting for Englund to vet than the lame comic-relief he is often asked to front. 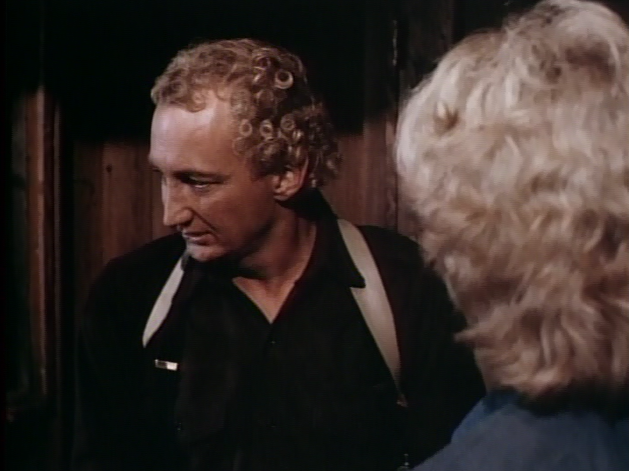 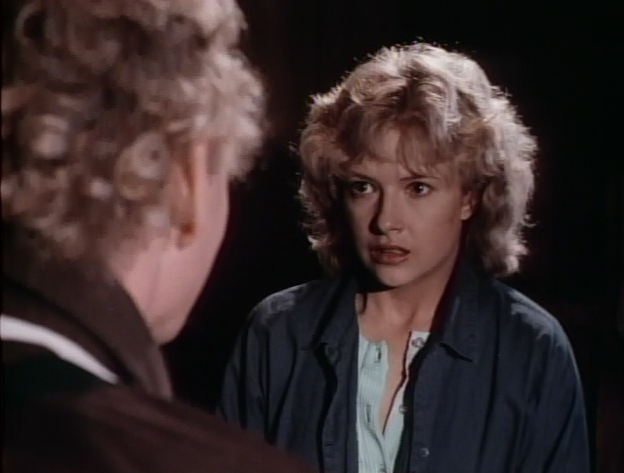 Secondly, V briefly reclaims its history as a truly macabre production in “The Wildcats.”  In the past we have seen all manners of dreadful horror imagery in the program, from reptilian babies to rodent-eating lizard people.  But this episode resurrects that brand of chilling imagery with a premature burial.  Poor Marta is framed for the murder of Charles by two “fiendish hellcats” Diana and Lydia.  Her fate is to travel through space -- awake and conscious -- in a transparent sarcophagus…with the corpse of her victim, the decaying Charles, at her side.
Today it is easy to write this scene off as silly because of special effects, and because some moments seem to our modern eyes to border on camp.
But much like the “Space Vampire” episode of Buck Rogers in the 25th Century (1979-1981), there’s also an extreme darkness to the imagery featured here.  In 1985, to see an innocent woman bottled up with a corpse and shot into space was nothing less than harrowing, at least to my young eyes.  It just wasn’t something you expected to see on network TV.  This is very gruesome stuff…and further evidence of Diana’s absolute depravity. 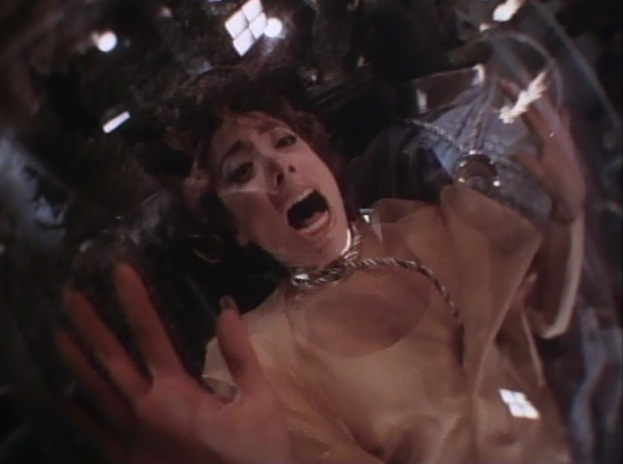 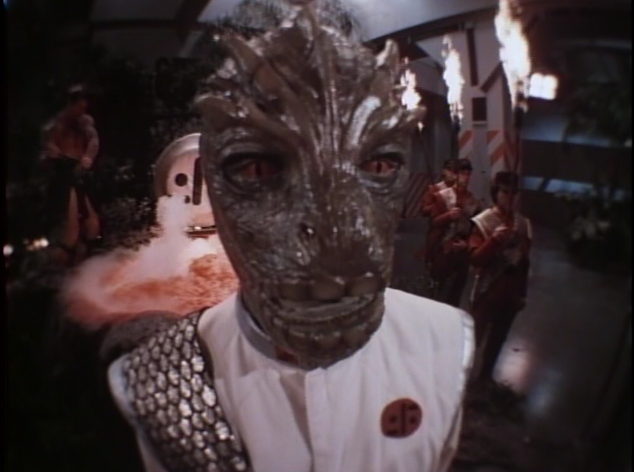 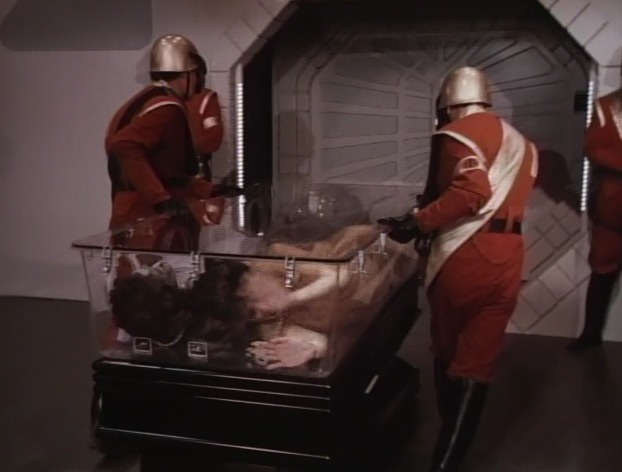 All of V’s deficits at this point in its history are present in “The Wildcats,” particularly a simplification of the human characters so that the Resistance seems almost cartoony, and yet “The Wildcats” also features that sub-plot with Willie “coming-out” and explaining to a human woman that he does not have the same taste as other men.  And finally, it features the macabre living-death of Marta, one hell of a send-off to the long-standing Charles subplot.
at April 01, 2021