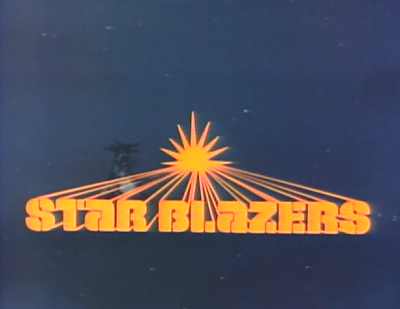 The ninth episode of the 1970s animated series Star Blazers (1979) does a strong job of showcasing imaginative visuals, and for that reason, this installment is considerably more interesting than some of the earlier episodes.
In this Star Blazers episode, a damaged and “very vulnerable” Argo suffers damage during an attack by the Gamilon fleet and subsequently seeks shelter inside an asteroid belt.  These asteroids are the remnants of the destroyed tenth planet in our solar system, Minerva.  Realizing that the ship is “not fit to go into battle now,” Captain Avatar approves a risky defense strategy by Engineer Sandor.
Specifically, he activates an experimental “polarity reactor” which magnetizes the ship’s hull, and pulls nearby asteroids onto the ship…essentially burying the ship inside rock on all sides.  This new “asteroid camouflage” prevents the Gamilons from easily locating the Argo, at least for a time. 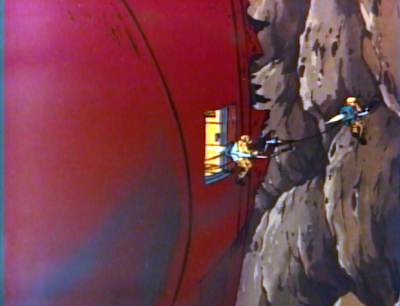 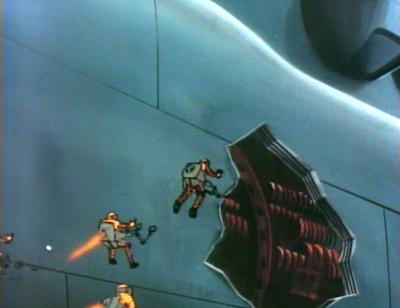 This episode features many dynamic visuals, which makes it a more interesting and lively segment than some so far.  For instance, we see Argo’s engineers working on the damaged hull of the ship in a thoroughly impressive sequence.  This EVA reveals scope well, with a team of personnel set against the backdrop of the detailed ship, and again, this is precisely the kind of composition that live-action programs of the day like Buck Rogers and Battlestar Galactica would have been hard-pressed to emulate.  Here, the audience gets a sense of the massive scale of the repair efforts. 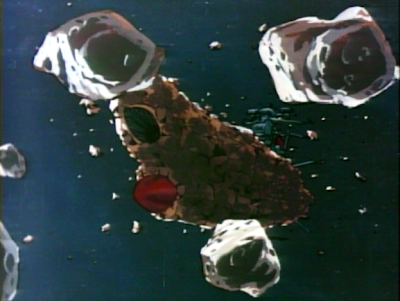 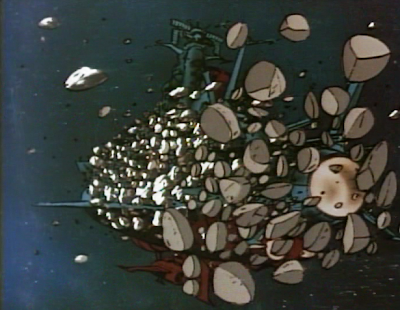 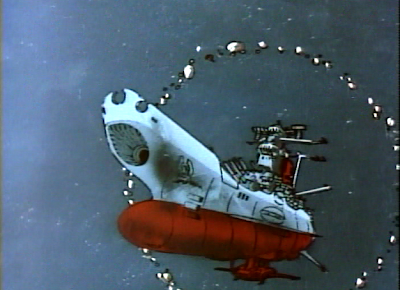 The visuals of Argo encased in asteroid rock, and then surrounded by a rotating weapon called an “asteroid ring” (to deflect Gamilon fire) are also incredibly impressive and inventive.  It’s been a few weeks since the show has revealed such flights of imagination.
If this episode boasts any weakness at all, it is in the characterization of the villains, the Gamilons.  These aliens sweat, grovel, whimper, gasp and are forced to speak dreadful dialogue such as “Boy that Star Force is really clever!”  In toto, one wonders how the Gamilons ever defeated the planet Earth, and brought it so low.  In virtually every episode thus far they are depicted as ineffective, even incompetent bunglers.  Lacking courage, loyalty and equanimity, one wonders how the Gamilon race has endured… 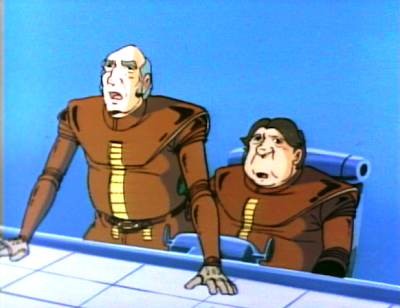 After the serious action featured this week, there are only 338 days left for Argo to complete its mission to Iscandar.  And the bloody ship still hasn’t left the solar system yet…
at April 29, 2021 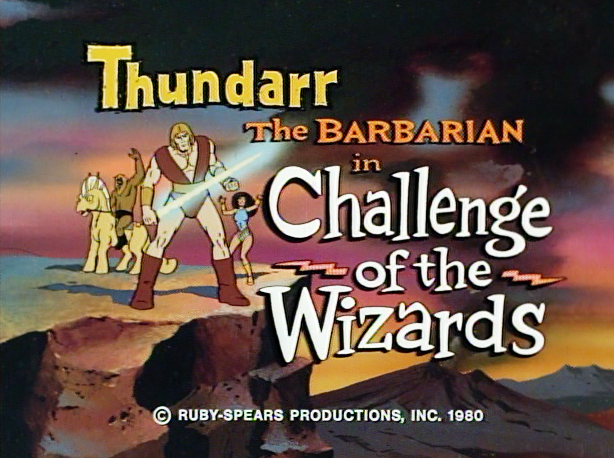