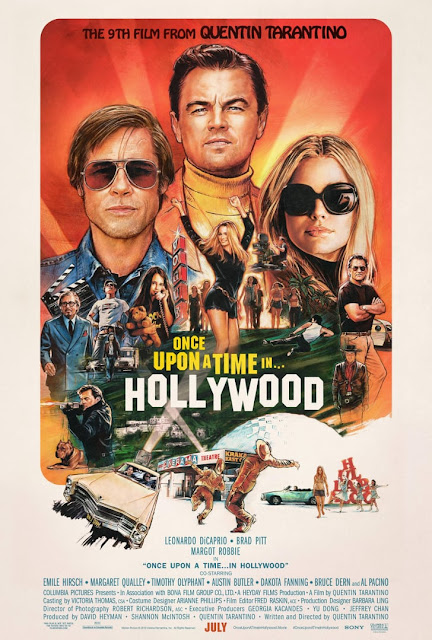 A Funny Thing Happened On The Way To The Polanski’s
By Jonas Schwartz
Not since Pulp Fiction has a Quentin Tarantino film caused such anticipation. Like in ’94, when Pulp Fiction was a revelation to the Cannes Jury, this year, Once Upon A Time In…Hollywood was lauded by critics when the film debuted at the festival in May.
Audiences are expecting a masterpiece from the new millennium’s great auteur and Once Upon A Time In…Hollywoodis quite intelligent, and media savvy. It stars two of Hollywood’s biggest stars, Brad Pitt and Leonardo DiCaprio, and features a who’s who of greats from the past (Al Pacino, Kurt Russell) and up-and-comers (Margot Robbie, Margaret Qualley). It evokes a nostalgia for the final months of the Hippie movement and the free-love sixties, which had been decimated by that boogieman of the establishment, Charles Manson, when for two nights in August 1969, his followers butchered seven people, including movie star Sharon Tate and her unborn child. A love letter to the ‘60s and the entertainment industry, Once Upon A Time In…Hollywood definitely has the Tarantino touch, but it still feels like lesser Tarantino rather than his Magnus Opus. 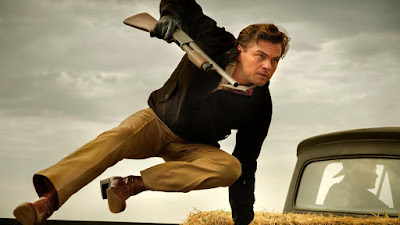 Once Upon A Time In…Hollywood follows two stars on opposite trajectories. Beautiful Sharon Tate (Robbie), a sparkling talent with a keen eye for goofy comedy, has a budding movie career, a marriage to star director Roman Polanski (Rafał Zawierucha), and a circle of famous friends. She and Roman have moved into a dazzling home in Beverly Hills and she anxiously awaits the birth of her child. In the house next door, Rick Dalton (DiCaprio) a once-popular TV western actor, has fizzled out, now stuck playing one-episode heavies on other actors’ popular shows. Cliff, his stunt double/best friend (Pitt) barely gets work and relies on Rick to pick up odd jobs, such as driving Rick around town. On the periphery, a slew of pretty girls hang around the Sunset Strip hitching rides, smoking dope, and stealing food from garbage cans. Both the movie star and the has-been have a date with destiny, when three of those pretty urchins, under orders from a deadly pied piper, come a-callin’ to the neighborhood of Cielo Drive.
There is much to admire in Once Upon A Time In…Hollywood. As always, Tarantino’s dialogue crackles. A scene about acting and feminism, between Rick and a child on the Western set (played winningly by Julia Butters), could not possibly have been written by anyone else. Prescient talk about fleeting fame and the loneliness of standing behind a façade that can collapse at any moment reaches a level of poetry. The perverse ending turns into a black comedy due to the scene’s excesses, which is Tarantino's trademark.
Visually, Tarantino strikingly captures the detail of ’69 Los Angeles, with gaudy colors and costumes, drug fueled music, and a desperation for frivolity. One shockingly sloppy shot for someone so meticulous: in one scene Pitt drives down Forest Lawn in Burbank and passes a large mirrored building with cable satellites named The Pointe, located by Warner Bros Studios. The building is so clearly modern that it sticks out like a bloody thumb, and it’s unclear how Tarantino didn’t edit around the building or FX it out. Editing could have turned this ambitious film into a classic. A good 30 minutes could have been cut from the first third in order to delete some obvious deadweight. The scenes with Steve McQueen, Bruce Lee, and Pacino’s agent Marvin Schwarzs are the most inconsequential to the themes and storyline.
Tarantino's handling of Tate is perplexing. Though Robbie is excellent in the role -- more about that below -- Tarantino treats her like a phantom, a girl he's ogling as opposed to attempting to understand. The camera tracks her dancing at parties, giggling with friends, and driving in fast cars, like one would admire an unobtainable girl. Her complex relationship with her husband is barely explored. The character of Polanski is almost a cameo in the film. If their story wasn't based on fact, the audience would barely remember her husband existing in the film at all. 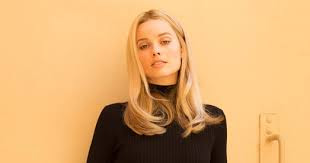 Tarantino has assembled a blue-ribbon cast. DiCaprio has never been better as the drunk, lost Rick. A hilariously painful scene in the character’s trailer after flubbing lines feels achingly honest. Much valuable time is spent watching Rick play the stock villains in the TV Western Lancer or the True Crime show THE FBI, but it’s obvious how talented DiCaprio’s character can be in the right circumstances. DiCaprio gives Rick a distinct stutter which humanizes his character more. Pitt takes his persona of the swaggering stud and presents a man with very little in his life other than his dog and his friend. Robbie is ravishing as Tate. She captures the innocence and innate joy of this tragic character. When Sharon talks her way into a movie theater showing her latest film and sits anonymously in the darkened theater, enjoying the audience laughing at her silly hijinks, Robbie exemplifies the high when a new actress realizes the effects she has on movie watchers. Though Tarantino seems unclear of the Sharon behind the legacy, Robbie fills in all his script's blanks. Margaret Qualley, Dakota Fanning, Austin Butler, Lena Dunham, and Mikey Madison are vipers as the various Manson family members who ensnare new recruits. One of the most intense moments involves Pitt as a mouse in their snake pit, blustering around these hippies who are harmless in his eyes. Yet they’re sitting in wait.
A time capsule of a distinct moment in time in American history, Once Upon A Time In…Hollywoodis a fairy tale of the land of make believe, where painted sets, Playboy Mansion parties, and swanky cars can give the illusion that the American Dream is attainable and free-flowing, but a hangover is coming. On Cielo Drive, a family of degenerates will end that dream, and on the other side is defeat in Vietnam, a crippling recession, and a break in at the Watergate Hotel in Washington DC that will lead to the destruction of America’s delusions once and for all.