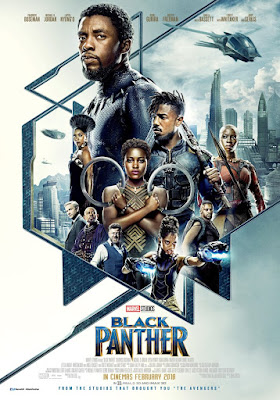 Responsibility has been the cornerstone of the Marvel universe. In the Iron Man films, Tony Stark's past playboy irresponsibility constantly bites him in the ass. The Avengers face ramifications for past collateral damage in Captain America: Civil War. And of course, Peter Parker's uncle Ben has been accredited with the famous quote, "With great power comes great responsibility." Now the blockbuster Black Panther raises the subtext to the forefront as an entire civilization suffers due to their past choices and the sins of their fathers in a thought-provoking, yet exhilarating action adventure.

T'Challa (Chadwick Boseman), who watched his father die in the Civil War film, follows the rituals, including battling a fellow tribe leader, to win the crown of King of Wakanda and absorb the land's ancient strength to become Black Panther. As warrior and leader, he must stop an evil dealer, Ulysses Klaue (Andy Serkis), who has stolen a Wakanda's artifact forged with vibranium, the source of Black Panther's power. T'Challa's former girlfriend Nakia (Oscar winner Lupita Nyong'o) and his top warrior Okoye (The Walking Dead's Danai Gurira) travel to South Korea to bring down Klaue. But it's Klaue's mysterious partner Erik (Michael B Jordan) who poses the greatest danger for the new king and his entire kingdom.

Director Ryan Coogler, who intrigued audiences with the complex Rocky sequel, Creed, and the tragic Fruitvale Station, raises Black Panther above standard popcorn fare. His script (co-written by The People Vs. O.J. Simpson producer Joe Robert Cole) contains epic battle scenes, including a civil war to rival the Avengers' tiff in the last film, high speed chases and snarling villains as one would expect, but the theme of consequences elevates the script and the film as a whole.

The film sees blood on everyone's hands, particularly our heroes, and they must devise a way to make right their failures. Countries that stand by and protect themselves from harm while watching their brothers and sisters suffer, they have blood on their hands. The men who justifiably were enraged due to inequality yet take blind vengeance on everyone they can, they have blood on their hands. People who follow a code without paying attention to how it affects the innocent, they have blood on their hands. In this universe, no one gets the skate by and no one is entirely blameless. It would have been easy for Coogler to make a simple 'us vs. them' world, but instead the film demands everyone act more responsibly and still manages to encase that in a thrilling movie that has lines at the box office around the block (as this review is being written, the film has already earned 900 million in six week). 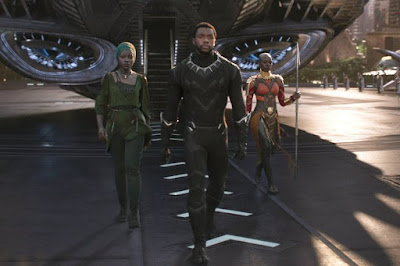 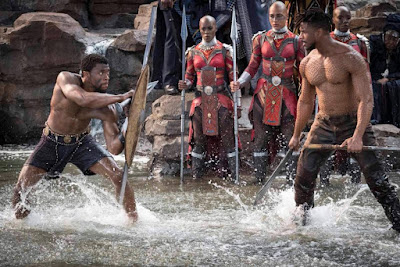 Coogler paints a world where the women stand equal to their male counterparts. They are fearless soldiers, technological gurus, and leaders who rule with their hearts. The Wakandan nation does still feel a bit patriarchal with its queen (Angela Bassett) taking a backseat to the men, and the strong women serving their male leaders, but progress takes baby steps.

Boseman makes a majestic leader. With concentrative eyes and an assurance that never comes off as cocky, he presents a true super being. Nyong'o brings wisdom to the spy unafraid of danger or speaking her mind. Gurira is fierce as the bold leader of the Dora Milaje tribe. Jordan, who shined in Coogler's two previous films, brings angst and fury to Erik. While many villains are driven mad by the machines that give him power, he is fueled purely by pain, and the film allows him a full arc for which he takes full advantage to build a complicated antagonist, a doppelganger to our hero.

The visuals are startling, with a color scheme of royal blues and purples contrasting with biting reds. Coogler allows his camera to speak for him, particularly in a shot where an upside-down camera spells out the chaos that has just emerged victorious. The action scenes are shot fluidly with intensity.

Marvel films never allow the audiences to check their brains at the box office. They consistently draw the viewer in but teach them the fallibility of even our most esteemed leaders, who strive like the rest of us to improve themselves so they can make the world a better place. Black Panther touches subjects about race and responsibility that few billion-dollar films would care to drum up and handles the themes with mature hands.

Check out Jonas's reviews at www.theatermania.com/author/jonas-schwartz_169