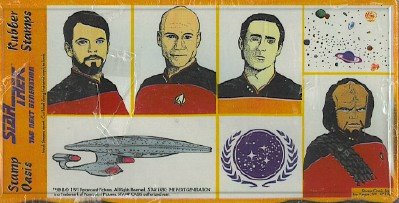 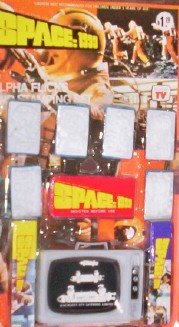 So what's with this? Little stamping toys based on popular science fiction TV series? Okay. Sure.
When I was a kid, I wanted toy guns (yes, I'm EXTREMELY violent...can't you tell?), action-figures and spaceship models and toys.

When I was even smaller, I did enjoy coloring books, viewmasters and colorforms too. Heck, on occasion I even played with Buck Rogers shrinky dinks. (Uh, that sounds dirty, doesn't it...?)
But I never really had a hankering to play with...stamping toys. Like the (left) pictured Space:1999 "Alpha Flicks and Stamping Set." by the Larami Corp. Not that there's anything wrong with it or anything (and I collect anything and everything with Space:1999 on it). I guess I just have visions of going around stamping images (of Commander Koenig, Dr. Russell, Moonbuggies, Eagles, etc.) on walls or something. Let's face it: what parent (no matter how big a fan...) is really going to enjoy that?
I thought Space:1999 was unique in featuring this odd-type of collectible, and then last year at a flea market in Salisbury, N.C., I found Star Trek: The Next Generation character "stamps" too. Because I've always wanted to stamp Commander Riker's face on the sofa, or the floor...or my wife's belly-button...
So... I guess you're just supposed to go around and "stamp" these on pieces of paper or something? Anyone ever play with these?
Give me phasers any day! (Set to stun, of course).
at May 24, 2006