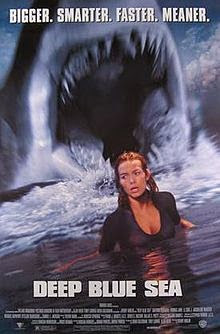 Think about it for a minute.

Both films -- released in the 1990s -- also draw their creative energy from the Pandora’s Box of the Clinton Age: Genetic Science.

In 1990, for example, the Human Genome Project began in earnest, unlocking the secrets of our biological make-up, and horror movies responded…with fear and worry.

Over the next ten years at least, the horror genre gave us cinematic visions such as Mary Shelley’s Frankenstein (1994), The Island of Dr. Moreau (1997), and Mimic (1998), films wherein ambitious scientists make…monsters.

Deep Blue Sea is decidedly a part of that mad scientist “school” (forgive the fish pun), not of the “revenge of nature” pack that Jaws more legitimately seems representative of.

Beyond matters of categorization, Deep Blue Sea is a fun, well-paced horror romp. Not all the CGI effects hold up very well today.  And the Scream (1996)-like material that sees L.L. Cool J lamenting that “brothers” never survive situations like the one in Oceania is risible at best.  Today, it feels horribly clichéd.

But sharks -- genetically engineered or not -- are terrifying nemeses.

On their terrain, we are just…appetizers.  Deep Blue Sea effectively taps into that universal fear of being in alien territory, hunted by a life-form that better understands the geography.  So there’s suspense and action here to go along with the goofy self-referential humor and don’t-tamper-in-God’s-domain lesson.

I don’t entirely respect myself for feeling this way -- especially since I hold movies to a high standard in terms of what they achieve and how they achieve it -- but Deep Blue Sea is a lot of dumb fun. 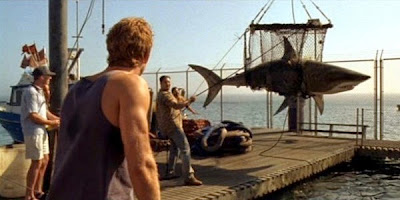 “If they eat you, it’s because they think you’re a fat little seal.”

Following the escape of a test shark from the facility, corporate mogul and disaster survivor Russell Franklin (Samuel L. Jackson) wants to check up on one of his controversial investments: a sea-going laboratory called Aquatica.

There, Dr. Susan McAlester (Burrows) has created genetically-enhanced sharks so she can extract from their over-sized brains a hormone that will cure Alzheimer’s in humans.

Following a storm at sea, the next-gen sharks -- all three of them -- stage a life-threatening break-out of the facility.

McAlester, Franklin, shark wrangler Carter Blake (Jane) and others are trapped inside the sinking laboratory, and the sharks are on the prowl.

But what do the sharks want?  Just another meal, or something else?

“Beneath this glassy surface, a world of gliding monsters.”

Beneath this shark-y-surface…a world of Jurassic Park tropes.

The scene and set-up in the latter is derivative of the former, but still I like how Harlin executes it; particularly the moment when red wine spills into the ocean water, right above the camera’s eye.

This is isn’t the only time in the film that the water will run red, so the moment is portentous, to say the least.

After the accident, both Jurassic Park and Deep Blue Sea share another similarity.  They each feature a flight to a far-flung facility that involves a visitor who is in a position to assess that facility and its work.

In Jurassic Park, Alan (Sam Neil), Ellen (Laura Dern) and Ian (Jeff Goldblum) fly to Isla Nublar to determine if the facility is safe to be opened to the public.  In Deep Blue Sea, Samuel L. Jackson’s Franklin flies to Aquatica to make the same assessment.

In both films, a sense of wonder comes next.  Alan and Ellen see real living dinosaurs, and also see how they are created in a lab.  They even witness a velociraptor emerging from an egg.  In Deep Blue Sea, Franklin witnesses shark wrangler Carter (Thomas Jane) riding a shark in the tank.  Then, he sees the operation to aspirate shark brain juice for Alzheimer’s treatment.

But of course, something goes wrong in both cases.

And that something is universally preceded by a storm’s arrival.  In Jurassic Park, a storm wreaks havoc when Nedry leaves his post with the security systems down.  He then drives his car into the mud, and is killed by a Dilophosaurus. But the storm also sends away the park’s main personnel, for reasons of safety.

In Deep Blue Sea, a storm rolls in, while most of Aquatica’s staff is off for the weekend, resulting in a helicopter crash, and an explosion.

In both cases, the subtext is all about Mother Nature.  Man (John Hammond) -- or woman (Dr. Susan McAlester) -- attempts to play God, to re-write nature.  So Forces of Nature respond.  Aggressively.
Man proposes and God disposes.

The primary boogeymen in both films -- the velociraptors and sharks, respectively -- are also defined by the dialogue as “hunting in packs.”  Similarly, the beasts are under-estimated vis-à-vis their intelligence.  The dinosaurs of Jurassic Park figure out how to mate, even in the absence of males.

And the sharks of Deep Blue Sea figure out to how to sink Aquatica so they can swim through the above sea gates.

Both the raptors and the sharks escape their cages, too, to wreak havoc.

And finally, just for fun, Samuel L. Jackson’s character dies in both films.  We see his severed arm in Jurassic Park. We see a severed leg in the water in Deep Blue Sea. 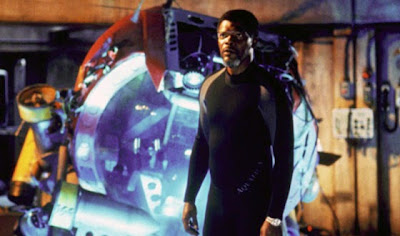 Near the finale of both films, too, survival depends on characters being able to turn the power back on in the respective facilities.

I could go on and on here, I suspect, but you get the point. Deep Blue Sea is, more aptly, Jurassic Sea World, or some such thing.

Yet, the wholesale aping of Jurassic Park doesn’t automatically render Deep Blue Sea a disaster. Harlin adds his own over-the-top stylistic touches to the material, slathering the film with whirling pans and zooms, and thus a real sense of visual kineticism.  The movie itself may not be as deep as the ocean, but it’s a ore-than adequate roller-coaster ride experience.

Intriguingly, the film also gives us a lesson in mechanical sharks vs. CGI sharks. In Deep Blue Sea, the scenes involving the mechanical shark interacting with the actors still hold up.  The scene in which one scientist, Whitlock (Stellan Skarsgard) gets his arm bitten off by a shark is terrifying, and more than that, terrifyingly real.  The CGI shark scenes, by contrast, look like living cartoons, no more real today than Jabberjaw. 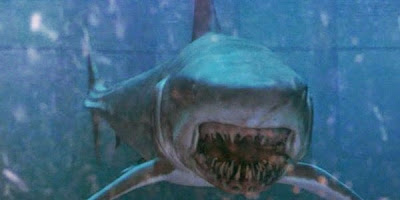 Just like Dr. Susan McAlester (our primary transgressor and tamperer in God’s domain…), the film goes down the gullet pretty easily.
at June 11, 2019