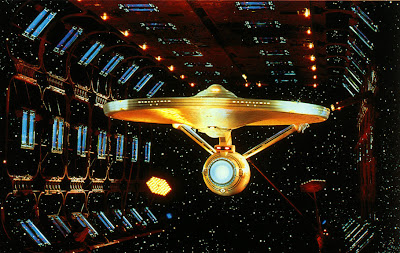 Sometimes I have termed the Star Trek movies 1979 – 1991 “my Star Trek” because of where they happened to fall in my life.   The original Star Trek was cancelled before I was born, and The Next Generation came around when I was a senior in high school.  So it is the movies that I closely associate with growing up, though of course I watched the original series in reruns as well.

It may be part and parcel of these feelings about “my” Star Trek era, but I have always felt very positively about the upgraded Enterprise interiors and exteriors, as well as the new Starfleet uniforms.  To my eyes, they looked simultaneously more futuristic and more realistic than their predecessors.

My favorite version of the Enterprise is the one featured in Star Trek: The Motion Picture.  I know some viewers tend to complain about the length of the dry dock scene with Scotty and Kirk surveying the great ship, but I have always felt that this particular moment -- better than any featured in the preceding TV series -- sells beautifully the size and grandeur of the starship.

This is important stuff, because the scenes involving V’ger -- which reveal the Enterprise dwarfed by comparison -- thus sell the enormity of the film’s menace.  In other words, the Enterprise is huge…and V’ger is absolutely ENORMOUS.    Encoded in this comparison is the sense of alien life being truly alien; of being outside the realm of human scale.  I admire the film’s success transmitting this notion… especially when so few science fiction films even try. 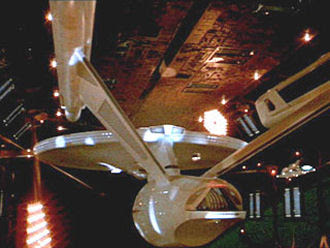 The subdued lighting inside the new Enterprise also helps to sell the overall reality of the starship.  Much of the time, Wise’s camera takes up a “crewman’s eye” position on the bridge that makes us feel like we’re right there, conversing with the officers and watching events unfold.  The number of insert shots of view-screens and read-outs further enhances the sense of us being right there on the Enterprise, receiving and interpreting information.

I like this approach very much, and the bridge set in the film is so great because all those displays and graphics actually look real, and the controls seem functional.  That’s not an observation you can make regarding the TV series bridge and the painted on, rarely-changing screens.

I guess I’m in the minority on this, but I also like how sleek, form-fitting, unisex, and deliberately un-military the uniforms of Star Trek: The Motion Picture appear.  They are simple, elegant and much less garish than their predecessors (again reflecting a shift towards Space: 1999 and minimalist 1970s aesthetics…).  For me, the TMP uniforms signal visually the “equal” nature of all demographics (male and female, alien and human) in Starfleet.  No more mini-skirts.

Star Trek: The Motion Picture is much-criticized, but I agree with your assessment. I feel that the costumes, miniatures, and sets all successfully broadcast the impression of a real starship and starship crew living in a future age.  At times, accordingly, the film boasts an almost documentary-like quality.  What The Motion Picture forsakes in fistfights, phaser battles and conventional thrills, I feel it gains in verisimilitude.

In terms of the new Star Trek movie, I give lots of credit to J.J. Abrams and his team for really “owning” the original TV uniforms and making them look good on the big screen. I just have to think there was probably a tremendous creative push to replace the original uniforms with a sleeker, less garish color scheme, but god bless Abrams, he didn’t succumb to that pull.

The new bridge looks futuristic, but in broad strokes the lay-out is the same, with the familiar captain’s chair, front console, and turbo-lift.  And I absolutely love that the original “chirping” sound-effects from the series were retained.  In some sense, that affectionate and faithful touch “sells” the new bridge design for me.

I don’t know that I possess the deep well of affection for the new Enterprise exterior and interior designs that I do those of the Motion Picture Era, but I nevertheless count them a success.  The ship felt like Star Trek to me, only Star Trek re-interpreted for the 21st century.

Again, I’m sure there was a considerable pull to go “gritty and dark” and make the Enterprise more submarine-like and less clean and bright, for instance.

I’m glad the filmmakers didn’t succumb to that urge.
at September 03, 2018