In "Happy Birthdaze," Zelda (Mary Wickes) plans to throw a birthday party for her intended beau, Sheriff Bevans (Joe Higgins). She has baked a birthday cake, and has a wonderful evening planned for him. Zelda asks Johnny (Johnny Whitaker), and Scott (Scott Kolden) to clean the house in preparation. Sigmund, meanwhile, wants to do something nice for his friends, and plans to clean the house himself.

Alas, it is also Big Daddy's Birthday, and the brothers are asked to clean the cave by Sweet Mama. They don't want to clean it, however, and decide to abduct Sigmund and make him clean the cave instead.  They attack Johnny and Scott's house, make a royal mess, kidnap Sigmund, and take the sheriff's birthday cake too.

Now the boys must retrieve their friend and the cake, before Zelda's big night is ruined. 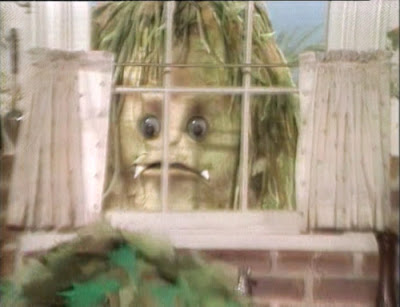 The fifth episode of the live-action Sid and Marty Krofft series, "Happy Birthdaze" showcases well the the formulaic nature of the series. The format is well-established already.  In each installment, the sea monster family kidnaps one of the protagonists, whether it is Johnny, Scott, or Sigmund, and the others must figure out how to rescue them from the cave.  Some lame deus ex machina helps the protagonists save their friend.

In previous weeks, we have seen Johnny dress as the Frankenstein Monster, or the surprise arrival of the Wolfman. This week, Johnny uses a tape recording of a tsunami to scare the monsters out of their own cave.  The tape recorder gag even recurs in a future episode ("The Dinosaur Show.")

Outside the formula, this episode features an amusing scene of Sigmund's encounter with a persistent mail-man, who wants to deliver a package to Zelda's house. Sigmund is inside, and must pretend to be Zelda, all while not letting him in.