Saturday Morning Cult-TV Blogging: Sigmund and the Sea Monster: "Is There a Doctor in the Cave?"

In “Is There a Doctor in the Cave?” Sigmund has fallen ill with a stomach ache. This isn’t the first time he has had one, and he tells his friends Johnny (Johnny Whitaker) and Scott (Scott Kolden) that he used to take medicine at the cave.  That medicine consists of melted jellyfish and warm squid milk.

Realizing they must help their tentacled friend, Johnny sneaks into the cave, only to learn that Slurp also has a stomach ache, and is taking the same medicine. Johnny attempts to steal the medicine for Sigmund, but is captured in the process.

Fortunately, the Wolf Man shows up at the cave, and the Sea Monsters think he is Scott, trying to pull a repeat of last week’s “Frankenstein” stunt. The Wolf Man goes mad with rage, giving Johnny the opportunity he needs to escape with the medicine that Sigmund needs.

Afterwards, Johnny gets stood up on his date with Peggy, and sings a song. 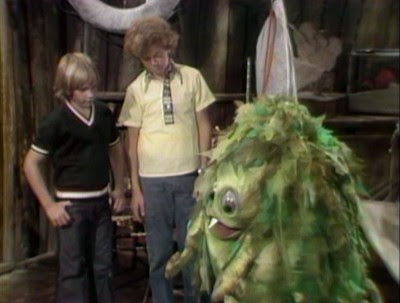 “Is There a Doctor in the Cave?” to its credit, remembers the series history of Sigmund and the Sea Monsters (1973-1975). By that I mean, last week the Frankenstein Monster visited the sea monster cave, and was proven to be an imposter. This week, when the real Wolf Man appears at the cave (his car broke down near the beach…) he is assumed to be an imposter, instead of the real thing.

Of course, the real question here isn’t continuity, but why this series has taken a weird turn to feature the Universal Monsters.

This episode features another odd movie reference. The sea monsters’ family physician is named Dr. Cyclops, but acts like Harpo from The Marx Brothers, and has the same type of mop-top.  Another pop culture joke: The sea monsters like the Wolf Man western they watched, titled “High Moon.” Gary Cooper most definitely does not star.

The last act of “Is There a Doctor in the Cave?” comes out of nowhere. Sigmund is nursed back to health, and suddenly we learn that Johnny has a date with Peggy, who was played, two episodes back, by Pamelyn Ferdin.  She stands him for that date, and Johnny sings a sad song, which ends the episode.  This interlude has absolutely nothing whatsoever do with the previous twenty-two minute narrative. It’s just a weird set up for the weekly song.