Brainiac develops a cloaking device that hides the Earth from Super Friends, in space. Wonder Woman, Black Vulcan, and Hawkman respond to a distress call from a distant sector. They travel through a black hole and end up on Toy Man’s planet.

There, the villain traps the heroes in a giant pinball machine, and then in a giant doll-house, where the heroes must contend with a giant wind-up baby doll.

The other Super Friends attempt to find their missing comrades, and battle Empress Zayna, who immobilizes them with sleeping pollen so she can turn them into statues and keep them in her stone menagerie. 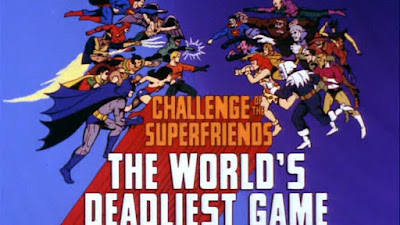 In one crucial way, “The World’s Deadliest Game” captures perfectly the creative plan of Challenge of the Super Friends (1978). If I had to state that strategy in two words it would be:

No rules whatsoever. The Super Friends observe no rules, and neither do the members of the Legion of Doom. It’s all pure phantasmagoria. Anything can happen, at any time. And something that was impossible in one minute, happens in the next minute.

Consider what happens in this episode. The villains cloak an entire planet, all as a trap for the Super Friends.  Think of the power required!

Then, the Super Friends travel to a distant galaxy without any faster-than-light drive…just by flying. And they travel through the center of a black hole, and don’t experience spaghettification or any gravitational forces that stop them.

And through it all, they are not wearing armor, or force-fields, or even rocket packs. 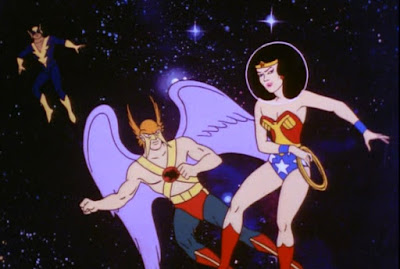 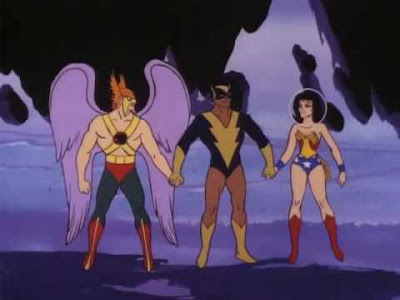 Which makes it very funny, for certain, when Hawkman and Black Vulcan complain, while dealing with the giant pinball machine, that they can’t fly because of the forces of gravity

Now the gravity bothers them?

No matter, a few minutes later they are flying again, with no further mention of gravitational forces.

This is a series that may know, broadly, the Laws of Physics, but has zero interest in applying them in anything approaching a consistent manner.   For instance, Green Lantern protects some Super Friends in space with a green force field. But then he leaves, when they travel through the black hole, without protection. 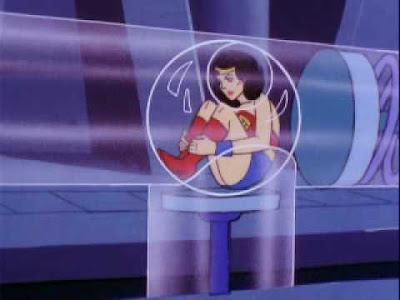 So someone writing the show knew that there should be some explanation for the survival of the Super Friends in the void of space. But then didn’t think to apply that explanation to survival in a black hole.

Again, I know the counter-argument is: this is a show for kids.

Well, as I always notes, kids are smart. For one thing, at the age they are watching a series like The Super Friends, they are also enrolled in science classes. So, they know -- in some cases better than adults – when a series strays from science into out-and-out fantasy.

The “no rules” approach of Challenge of the Super Friends makes the battle between the JLA and the Legion of Doom completely arbitrary, a matter of luck. There is no underlying reason for victory or defeat. It’s just a matter of what “works” this week.   It’s weird that the Legion of Doom would never use its planetary cloaking device again, or modify it for their headquarters, for instance.

The best aspect of this episode involves Toy Man's doll-house, which manages to be a creepily, nightmarish locale.

Challenge of the Super Friends is really Short Attention Super Hero Theater. You can get the gist of the story while you eat your cereal, get your clothes on, and start the day. If you pay total attention to the story-lines, you will realize how vapid and dumb the series actually is.