“Now that Star Trek: Discovery (2017) has premiered, how do you rank the pilot, “The Vulcan Hello” with other Trek pilots of yore?”

David: That is a great question.

I’m going to take it to mean that you are asking me to rate all the Star Trek pilots, in light of Discovery's premiere.  (Where does the new pilot fit, in other words, historically-speaking). 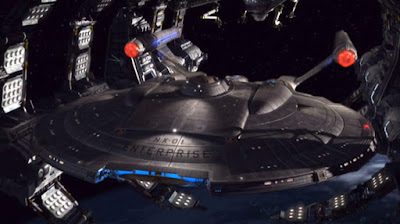 It is funny that Discovery has revived all these discussions of Star Trek’s past looking too “advanced” to be pre-Original Series, because certainly, Enterprise lives up to that description. The series is set a hundred years before the era of Kirk. Yet the silver and grays of NX-01 look more TNG era than TOS era, and also manage to be uninspiring environs for the action.

In addition, “Broken Bow” panders to audiences by trying too hard to be sexy and edgy (de-contamination rub-downs!), and by boasting some unnecessary connection to the TNG future (Temporal Cold War from the future!).

These are some of the dullest, most forgettable characters in the whole franchise, and “Broken Bow” doesn’t help to establish them in a memorable way. That said, it’s good to see Zefram Cochrane again, especially when the rest of the storytelling here feels so creaky. 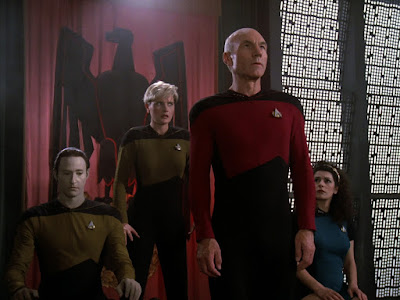 5. “Encounter at Farpoint” (Star Trek: The Next Generation)

There are a lot of things I love about the pilot of TNG: a cameo by De Forest Kelley, for instance, and a point-of-view moment when Captain Picard (Patrick Stewart) implores Wesley (and by extension, the audience) to try out the captain’s chair.

But the writing in "Encounter at Farpoint" fails the series’ captain, who is characterized as a children-hating, French surrender-monkey, at this point.

Literally, Captain Picard surrenders the flagship of the Federation in the first five minutes of the show. (And then does so, again, three episodes later in “The Last Outpost.”)  But at least Stewart inhabits his role brilliantly from the vert beginning. Director Corey Allen also gives Picard a splendid introductory moment; stepping out from silhouette.

Marina Sirtis, Denise Crosby, and Jonathan Frakes are all really weak in this episode, and would take some time to grow into their (now classic) roles.  Without much by way of good performances, the nature of the alien mystery at Farpoint station fails to truly be affecting.

I don’t hate this pilot. There’s a lot to like here, actually. It’s just that "Encounter at Farpoint" is less good, basically, than the other pilots are.

The amazing thing, I would submit, about "Encounter at Farpoint," is that the series' writers  eventually redeemed it. "All Good Things" returned to this story, and deepened it (with an encore appearance of Q as the 21st century judge).

Also, virtually every ensuing Q episode was stronger than this one.  The series could have abandoned the omnipotent alien character after "Encounter at Farpoint," judging him part of a mediocre story.

Instead, the series re-committed to "Q" and the concept of the humanity on trial. 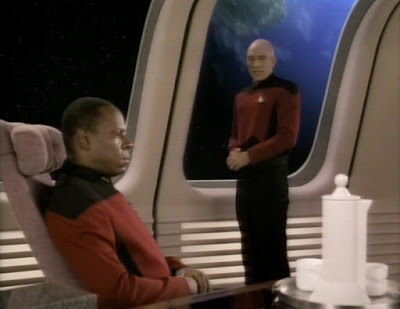 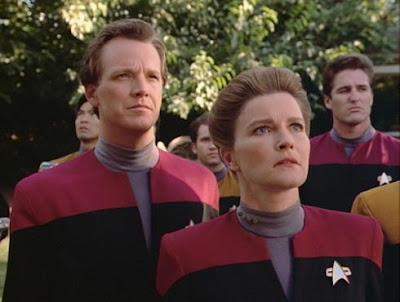 “Emissary” opens in fascinating form with the Borg vs Starfleet battle at Wolf 359, but most of the central performances are either straight-up weird at this point (Avery Books), or stilted and diffident (Nana Visitor, Terry Farrell, Siddig El-Fadil).

Still, the unusual tale about the wormhole -- and aliens inside it who perceive time as non-linear -- is fascinating, and well-written. (In fact, Arrival [2016] followed in its footsteps decades later.

Voyager’s "The Caretaker" is the mirror-image of "Emissary."

I don’t find the story-line (of the Caretaker Array) particularly compelling, or cerebral, but the main cast here “gels” faster than in any Star Trek pilot that came before it. The Voyager actors, especially Kate Mulgrew, basically nailed their roles -- and character chemistry -- right out the gate, which is surprisingly given all the behind-the-scenes strife involving Genievieve Bujold.

These pilots are both good, but I would be hard-pressed to pick one over the other. 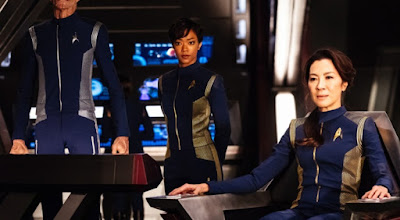 Basically, “Encounter at Farpoint,” “Emissary,” “Caretaker” and “Broken Bow” are all the product of the same mind-set and company: the Star Trek franchise as run from between 1987-2005.

Airing in 2017, Discovery, in a sense, is something truly new, and different.

“The Vulcan Hello” doesn’t introduce all the series regulars, or even the titular starship during its 42 minute span. Instead, it takes a riveting scenario -- a dangerous encounter at the border of Federation space -- and stretches it out to episode (or two episode, length).

This would be like the Wolf 359 sequence of “The Emissary” lasting 45 minutes.

This is an original and daring creative choice, and one that suggests Discovery’s serial storytelling is going to bring a fresh approach to the sturdy and long-lived franchise.

“The Vulcan Hello” introduces audiences to a “new” Star Trek era, but one that boasts a history and shape (take the “lateral” transporter on Shenzhou, for example...).

Also, for the first time in Star Trek history, members of an alien race acting in opposition to Starfleet are treated as main characters (replete with flashbacks) rather than as interchangeable aliens of the week. This approach promises a deep dive into intercultural communication/relationships.

Make no mistake, Star Trek: Discovery is very different from the other pilots on this list, but different doesn’t have to equal “bad.” Some old-school Trekkers are are already making that mistake, instead of letting the series play out, at least for a few weeks, before assessing.

From what I've seen, “The Vulcan Hello” promises, perhaps, the most complex and cerebral interpretation of Star Trek we have yet encountered. 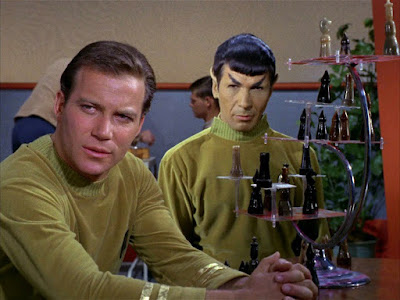 The second pilot for the original Star Trek added William Shatner, fist-fights, and easy-to-digest moral statements ("absolute power corrupts absolutely!") to the mix, and brought a TV classic to the screen in the process.

On its second go-round, the series got it right: balancing action, intellect,and strong characterization in an appealing, crowd-pleasing way. This is actually a very strong episode of the Original Series, depicting the Enterprise’s dangerous encounter with a strange barrier at the edge of the galaxy.

Immediately, William Shatner makes Kirk a sensitive individual, and a leader of his crew. The episode also establishes Mr. Spock’s cold-blooded nature beautifully.  If Dr. McCoy had been present, this would have been, actually, the perfect Star Trek pilot. His absence here (as a crucial point on the heroic triangle) is keenly felt. 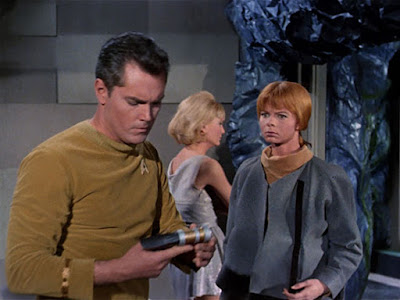 Okay, so it didn’t sell the series. On those grounds, it was a failure.

But “The Cage” is one of the all-time best episodes of the franchise, in any generation. It’s the story of a battle-weary Starfleet Captain (Jeffrey Hunter's Christopher Pike) who is tired of carrying the weight of the world on his shoulders. He's so exhausted, he's ready to quit the service.

And just when it looks he could “escape” into dreams or fantasies, Pike comes back stronger: taking responsibility not just for himself and crew, but for the human race at large, in the galaxy, which could be enslaved by the people of Talos IV.

“The Cage” doesn’t bow to the “shouldn’t this be a cowboys in space show?” mentality underlining "Where No Man Has Gone Before."  This is a hard sci-fi hour, with no compromises for audience expectations of the day. "The Cage" is tough, smart, and well-acted, and still the best damned pilot in the franchise.
at October 02, 2017