In “The Vikings are Coming,” Eric the Red (Jim Backus) and the Viking warrior Brunhilda (Lisa Todd) materialize in the local cemetery hoping to prevent their (unseen) enemy, Lothar, from planting his flag on this new territory.

Now they just need to find their own banner to plant.

The Ghost Busters are on the job, however, and send the Vikings back to the Great Beyond using the ghost materializer, giving the ghosts an inept variation of a Viking funeral. 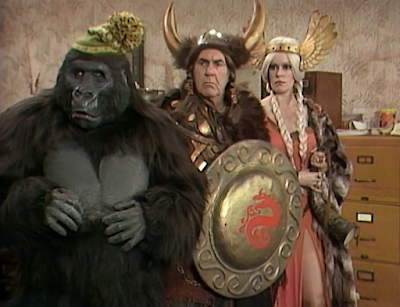 Let that description settle in for a while.

The episode is absolutely as ridiculous as that casting suggests. His casting makes one wonder why almost every guest star on the series is well-into-middle age.  Backus doesn't exactly have what we might think of as a Viking physique, or mind-set.

Backus can also be seen in an episode of Filmation’s Ark II (1976), “The Cryogenic Man.”  Here, he chases the Ghost Busters through a variation of the series’ running “corridor” joke.  Another running gag sees Brunhilda blowing a Viking horn in close proximity to him, causing him immense pain.