In “Only Angels Have Wings,” The Red Baron (Howard Morris) and his grease-monkey, Sparky (Robert Easton), materialize in the local graveyard and need a new plane.

They wish to take revenge on the British pilot who shot the Baron down in World War II: Lord Smedley Hargrove.

Unfortunately, Spenser is a descendant of the British flyer, and so the ghosts' revenge focuses on him. 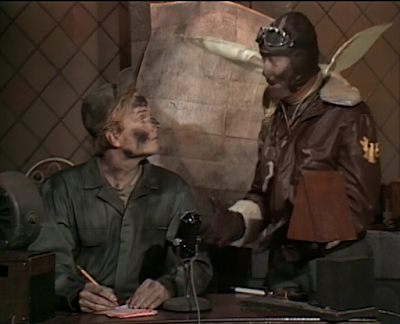 The (extreme) budgetary limitations of The Ghost Busters (1975) come into play a bit in this week’s episode.

In particular, there are scenes here in which the ghosts of The Red Baron and Sparky ostensibly take flight in a plane, and attack Tracy, Spenser and Kong.

We never see the plane, even once, only actors pointing towards the roof of the sound-stage.  Similarly, the finale involves Spenser downing the plane by throwing split pea soup (as thick as fog!) at it.

Again, we don’t actually see the plane crash, or come down.

This week’s ghost is not a silver screen monster, either, but a famous historical figure. We have seen this aspect of the series formula before, with “They Went Thataway,” an episode about Billy the Kid.  At least when the monster ghosts are inept fools, no real person's memory is being slandered. 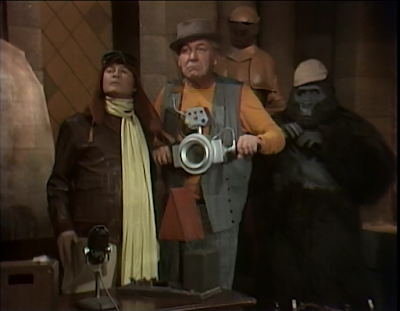 Fans of Mystery Science Theater 3000 will recognize Sparky as Robert Easton, an actor in two films skewered by the Satellite of Love: The Giant Spider Invasion (1975), and The Touch of Satan (1971).

Outside that singular honor, Mr. Easton had a diverse and impressive acting career, appearing in Star Trek VI: The Undiscovered Country (1991) and playing a character called Sparks in Voyage to the Bottom of the Sea (1961).