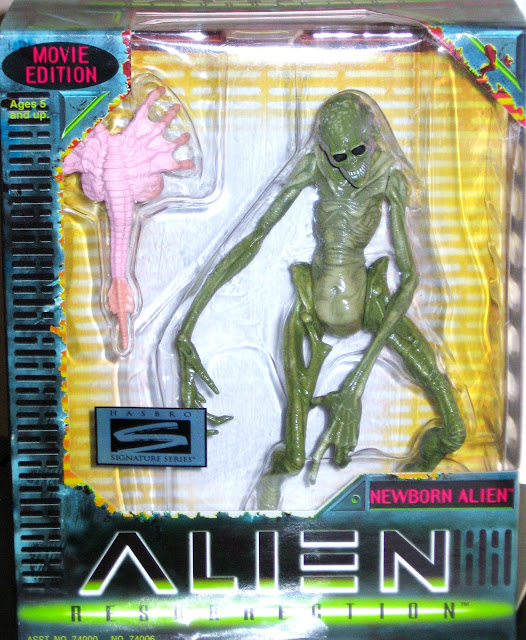 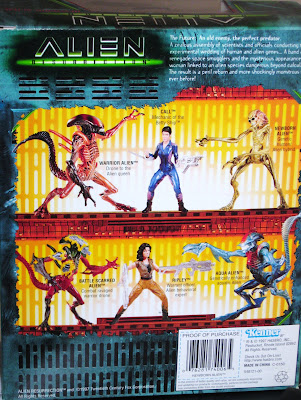 No bones about it, Alien Resurrection is my least favorite "pure" Alien movie.  There's something vaguely cartoonish and campy about the affair that I find troublesome and irksome, though I readily admit there are moments and scenes I cherish.

But none of those moments feature Dan Hedaya, I assure you.

At the very least, the crew of the Betty gave us an early glimpse of Joss Whedon's Firefly concept. and as usual, Sigourney Weaver was terrific as Ripley.

Anyway, in the year of Alien Resurrection's release (also the year of Starship Troopers), Kenner -- a company that had already released some terrific Alien and Predator-styled toys in the early 1990s -- released a "movie edition" set of six action figures from the fourth Alien movie.  These were relatively large figures compared to the earlier editions, about six-inches in height.

The toy box described the film's milieu in rather verbose terms: 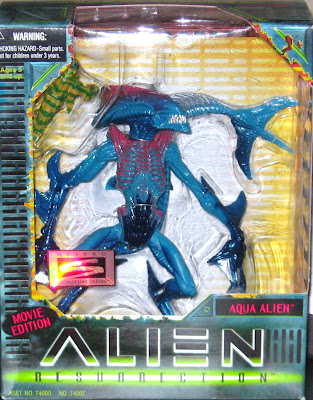 "The Future.  An old enemy.  The perfect predator.  A zealous assembly of scientists and officials conducting the experimental wedding of human and alien genes...A band of renegade space smugglers and the mysterious appearance of a woman linked to an alien species dangerous beyond calculation!  The result is a peril reborn and more shockingly monstrous than ever before!"

Kenner produced two protagonists for this variation on their Aliens line, the aforementioned Ripley, described as "warrant officer" and "alien behavioral expert," and Winona Ryder's android, Call, described plainly as the "mechanic of the Betty Ship."

The alien side was represented by the warrior ("drone to the Alien queen,") the battle-scarred alien ("combat ravaged warrior drone"), the Aqua Alien ("genetically enhanced aquatic alien") and finally, the Newborn ("genetic human/alien hybrid"). 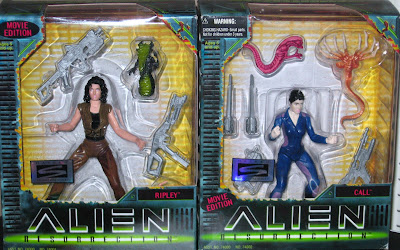 The likenesses on the human(oid) characters are pretty good, and alien drone, Newborn and battle scarred aliens all look pretty awesome, as you can hopefully see.

The aquatic alien was not featured in the film, though there was an underwater scene in the film designed and executed as an homage to The Poseidon Adventure.  I understand that the Newborn alien is pretty unpopular with Alien fans because, heck, why mess with perfection when it comes to these xenomorphs, but it's certainly a ghoulish-looking thing. 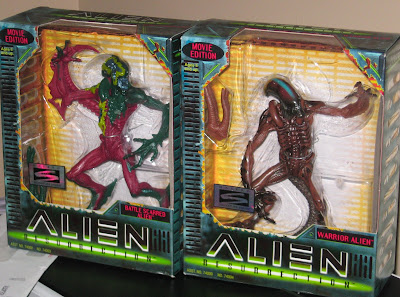 Another nice touch: many of the figures come complete with awesome miniature toys, including facehuggers, a small alien queen, and...a blood-spattered chestburster.

Now, my son Joel has never ever seen any of the Alien movies...I would never allow that at his tender age.  But he loves the monster action figures, particularly the Newborn and the chest-burster.  Except he just thinks the chestburster is a red-speckled worm monster/baby alien...
at May 16, 2017