“Futurepast” is a strange episode of Logan’s Run: The Series (1977). The episode’s writing isn’t especially compelling.  But the visualization of the story is absolutely superior.  In fact, this is one of the best visualized stories of the entire series.  The imagery is symbolic, and actually develops the characters; or at least one character: Jessica. 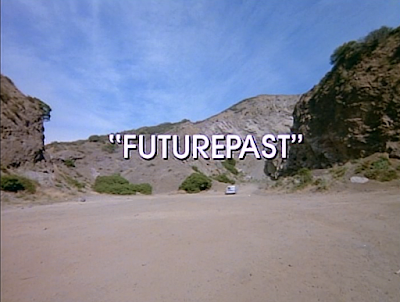 Here, Logan (Gregory Harrison), Jessica (Heather Menzies) and REM (Donald Moffat) find a dream clinic in the woods; one run by an android and "dream reader" named Ariana (Mariette Hartley). Every time REM is near the lovely Ariana, sparks fly out of his body.

In other words, it's android love.

But while REM and Ariana court one another, Logan and Jessica decide to avail themselves of the dream clinic and go to sleep. Once unconscious, they begin to experience a high level of nightmares (or, to start out, actually clips from "The Collector" and "Pilot.") Logan dreams he has run into another Sandman, and Jessica dreams she is in Carousel.

Then there's some footage thrown in from "The Capture" too, just for good measure...

But soon, she encounters a Boogeyman -- a representation of death -- that implores her to join him.

REM discovers he can't wake up his friends until the cycle of nightmares is over because they're in "Cycle C" sleep and going deeper, towards "Cycle D," which means death. And worse, Francis (Randy Powell) and another Sandman have arrived at the clinic too, and shoot Ariana.

Logan and Jessica emerge from their nightmares, and trick Francis into undergoing the process. REM, meanwhile repairs Ariana, and promises to return to her, once Logan and Jessica have found Sanctuary. 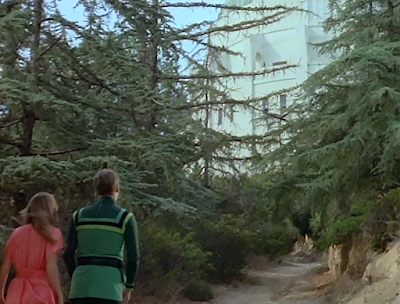 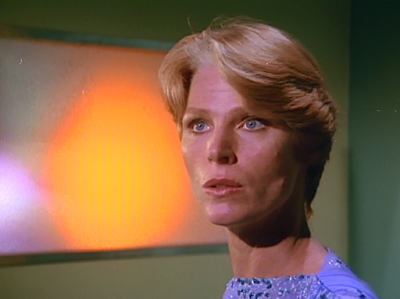 Some of “Futurepast” is quite hokey. I readily grant that. The android love story is stilted and a little weird, and more than that, unexplained. The connection between REM and Ariana is sweet, but it isn’t clear how androids can experience love.

And the final method to get rid of Francis (tricking him into going to sleep) doesn’t do much for his character. It makes him seem gullible and weak.  Since he's a hapless pursuer, this development doesn't help Francis seem more menacing.

Also, the episode begins, quite unimpressively, with clips from previous programs.  We have already seen Logan grapple with his fears about killing, and being hunted by other Sandmen from the City of Domes before (“The Collectors.”)

So yes, at times, “Futurepast” is a clips show.

But then something authentically intriguing happens.

Jessica’s nightmares develop, and the imagery becomes quite powerful. Jessica encounters a grinning Boogeyman figure. He is dressed all in black, except for his white Carousel mask. He is a frightening figure, and yet, in some way, a compelling one. 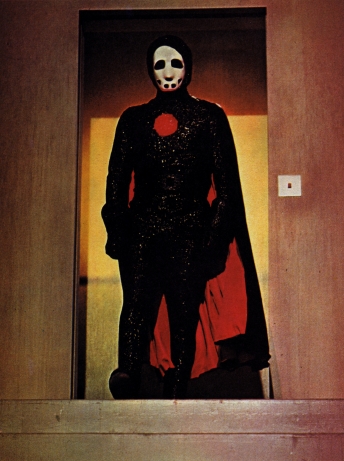 He attempts to seduce Jessica. Not sexually, exactly. He tries to bring her to him by telling her that some part of her yearns to be with him; to be with Death. She admits this is true. She is drawn to him.

And this admission seems to coincide with Ariana’s suggestion that all humans subconsciously possess a death wish. This is precisely what Jessica seems to experience in her dream. 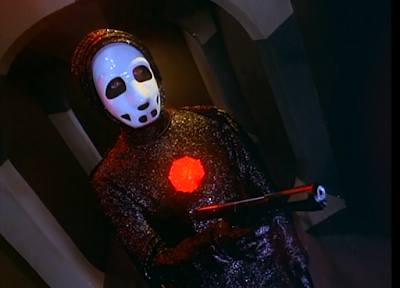 Incidentally, the admission also ties in with the City of Domes and the Carousel/Renewal ritual. There must be some part of the city denizens that acquiesce to the process; to death itself. The whole society is based, in a way, on a worship of death, though with a belief about the after-life.

But another portion of Jessica’s dream is even more intriguing. As she runs from the grinning boogeyman, she encounters her Mother. Jessica -- both in the movie and in the TV series -- has expressed the desire to know her mother. This is not considered normal in the City of Domes. All children there are raised by computers in “The Nursery.” It is considered perverse and sick to want to know your birth parent in this world of casual sex.

But Jessica possesses some sense that being a mother involves more than the biological act of conception.  She wishes she could know her mother, and benefit from her mother’s experience. And n her nightmare in “Futurepast,” Jessica actually encounters her mother. Jessica is filmed from a high angle, making her look small an insignificant in the frame, as she is bracketed by two images of her mother. 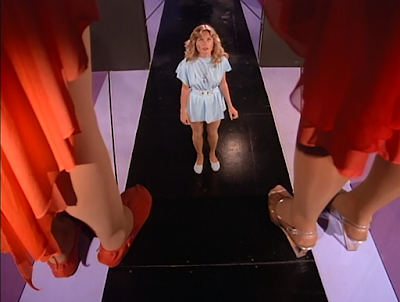 Her mother, meanwhile, is shot from a low angle, which makes the maternal figure seem imposing and powerful.  And in the nightmare, Jesscia's mother spurns her; and her desire to know. The mother is a figure not of experience and knowing, but of danger, cruelty, and great power.  The images absolutely convey this relationship in a symbolic fashion. 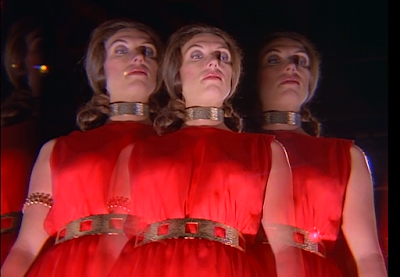 Some viewers may find it a little bit much, but “Futurepast” thrives on this symbolic level, utilizing fish-eye lenses, and slow-motion photography, to represent and extend the experience of a nightmare. The usage of film grammar in this episode is absolutely superb, and in some way the imagery carries the day, overcoming the stilted nature of the story. We learn more about Jessica’s psyche (and therefore her character) in “Futurepast” than we do in any other episode of the series. 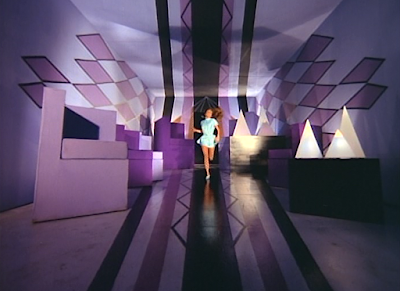 It would be nice if the episode found some way to excavate Logan’s character through visuals as successfully. Instead, “Futurepast” just ports in his nightmare from “The Collectors,” and that’s a gigantic letdown.

Did the series' writers really have nothing else to about the title character of the series?

We know from his history that Logan begins to question, and chooses to run fro the City of Domes.  We must presume that this is because he has come to see himself as a murderer.  It seems like his dream in "Futurepast" should focus on that idea.

What if he were chasing Jessica in a dream, with Francis at his side?  What if he cornered her, and had to pull the trigger, with Francis urging him to do so?  That situation, and Logan’s solution, would have revealed far more about Logan 5 as a human being and as a continuing character. 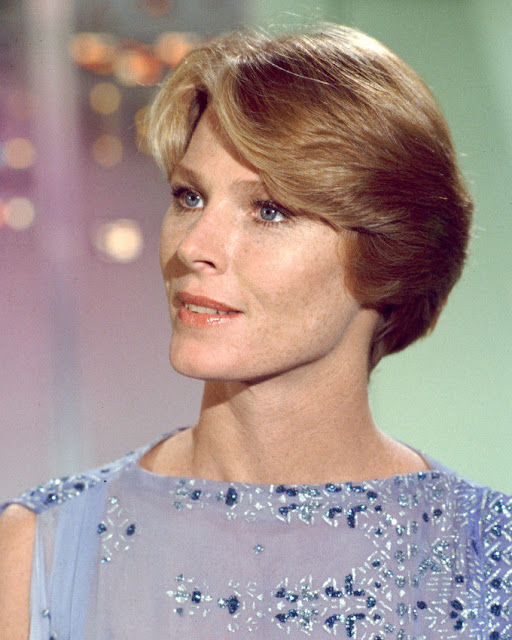 Finally, it is great to see Mariette Hartley in this episode, and even though she acts unemotionally as an android character, the episode conveys, visually, her innocence and goodness. When we first see Ariana, she releases a bird into the air, from a balcony. 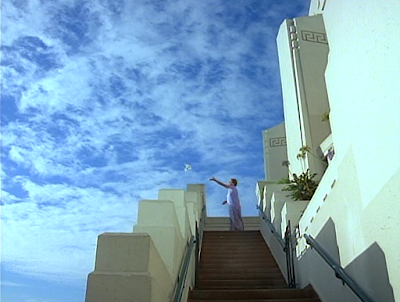 It’s another fascinating act of symbolism pictured above. Ariana's job, as a dream specialist, is to free people from the pathologies that hold them back during waking life.  Her act of releasing the dove suggests her role.