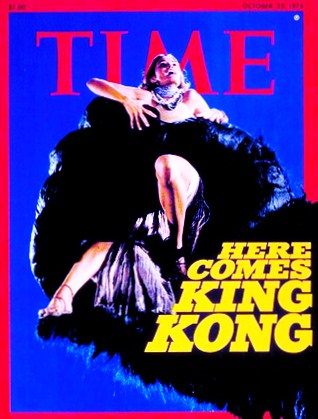 For me -- at the tender age of seven -- one huge thrill of the 1976 Christmas season was the debut of Dino De Laurentiis’s 24-million dollar epic King Kong, a remake of the classic 1933 giant ape movie.

The film premiered in twelve-hundred theaters in America on December 17th, just a week before the holiday, and the cinematic initiative was supported by a then-impressive fifteen million dollar promotional and marketing campaign.

It was money well-spent.

King Kong was absolutely everywhere in the final days of the Bicentennial year.  Described (humorously) as “the most exciting original motion picture event of the year,” the John Guillermin film which introduced the world to actress Jessica Lange, was also the first “movie merchandising” blitz, in fact, of my lifetime, at least that I consciously remember.

The arrival of the new King Kong was feted in Time Magazine, in a cover story called “Here Comes King Kong,” to start.  The article by went behind-the-scenes of the film’s production to interview De Laurentiis and Lange, among others, and complimented the new Kong, essentially, as being “good trash.”  The same piece offered had the priceless (and absolutely accurate) description of the 1933 Kong fans as a “testy, loyal” cult.

Meanwhile, Mego participated in the Kong Mania with a toy blitz that included the manufacture and release of Plush King Kong stuffed animals, a King Kong Bop Bag (or punching bag), and a model kit of “Kong’s Last Stand” at the top of the Twin Towers.

One of the coolest Mego Kong toys -- but which I never owned -- was “King Kong against the World”, a target game in which mini-jets could fire darts at a figure of King Kong and knock him from his perch on one of the towers.  “He teeters, he totters, he roars, he falls…” advertised the box.

Meanwhile, Topps released an impressive set of King Kong trading cards and stickers.  There were 55 cards and 11 stickers in the entire set, and the cards could be gathered together and assembled as a puzzle.  King Seeley, meanwhile released a Kong themed lunchbox with thermos.  Colorforms also got into the act by releasing a Kong playset. 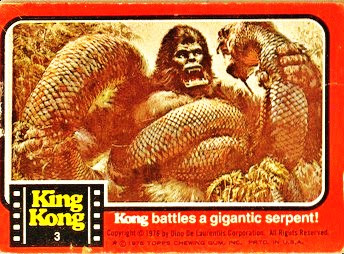 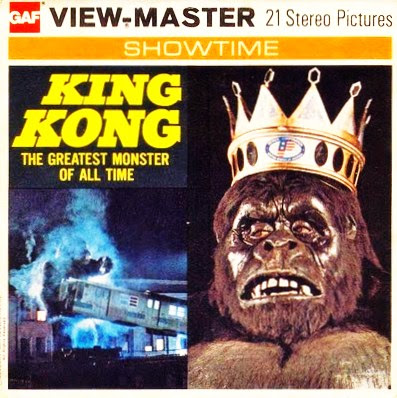 Two bits of 1976 merchandise that I owned at the time of Kong Mania were the Ideal Board Game, in which players had to prevent Kong from reaching the top of the World Trade Center, and a Viewmaster set of the movie.  I still have vivid memories of watching those color Viewmaster slides on my (dark) basement family room wall.

Down the line -- further and further -- the King Kong merchandise grew progressively weirder.  There were four King Kong drinking glasses sold through the Burger Chef restaurant.  Two glasses featured imagery of Kong on Skull Island, and two featured him in NYC.  Meanwhile Mego also offered a King Kong drinking straw in which the more fluid someone drank, the higher Kong would climb the Big Apple skyscraper.

If that wasn’t odd enough, a unique promotion was offered in which consumers would get a King Kong keychain free when “you purchase a pair of Sedgield jeans.”  It wasn’t just any keychain either, but one “containing” Kong’s “real hair from Paramount Pictures’ epic film release.”

Just what you always wanted, right?  Well, at least each keychain came with a certificate of authenticity…

Finally, Jim Beam released a King Kong decanter.  It was molded in the shape of Kong’s torso and head.  You could snap off Kong’s skull and pour yourself a drink, I suppose, if you wanted.  Jim Beam even suggested the ingredients for a King Kong Cocktail: orange juice and grenadine. 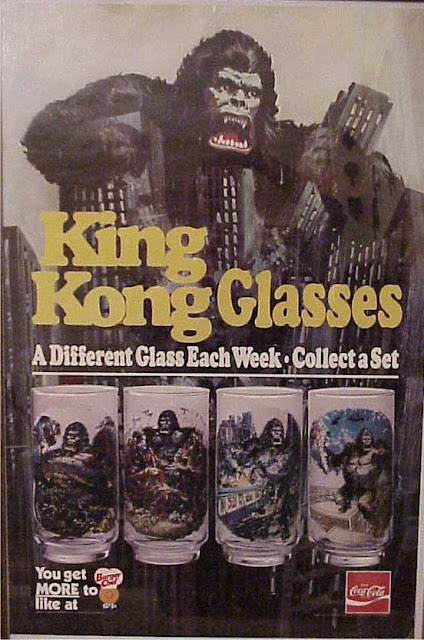 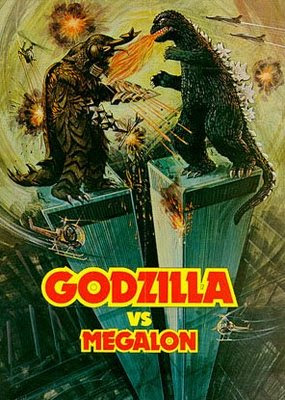 King Kong Mania was in the air in other ways too.

A poster for the American release of Godzilla vs. Megalon showcased the two beasts grappling...on top of the World Trade Center buildings, though no scenes in the film occurred in New York.

And then there were other knock-off films such as A.P.E. (1976), Queen Kong (1976)  and Mighty Peking Man (1977). Within two years, King Kong aired on television, and NBC, but fans of the big ape had another treat in store.  The network aired an extended cut of the film, one with scenes never before integrated into the theatrical cut.  It is this legendary version, actually, that many aficionados prefer to this day.

Although a sequel, King Kong Lives (1986) arrived on the tenth anniversary of Kong Mania, almost no merchandise was released to celebrate the film. Instead, Kong Mania had to wait to re-emerge until 2005 and Peter Jackson’s three-hour re-do of the property.

Since I was seven at the time of the 1976 King Kong, it remains the version of the legend I feel most nostalgic about.

I often watched the original 1933 version on Thanksgiving Day, when WWOR Channel 9 ran a Kong Marathon (including Son of Kong and Mighty Joe Young), but there’s just something special for me about the 1976 version.

I saw it in the theater – tickets were 3.00 dollars apiece as my father reminded me the other day – and remember well all the toys and merchandise. I also still recall my first visit to the World Trade Center – also in 1976 -- and riding the elevator all the way up to the observation deck.