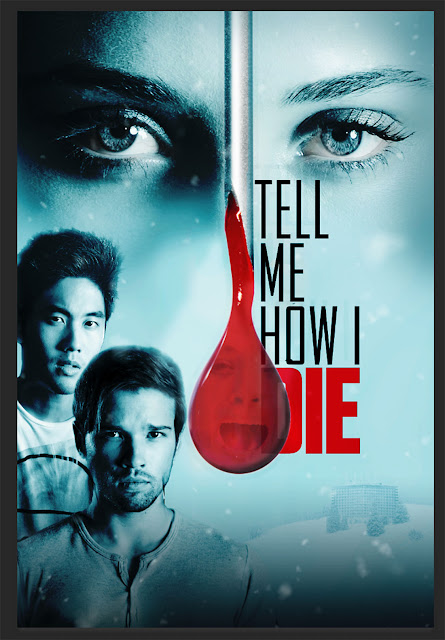 [Watch out for Spoilers.]

Some months ago, I happened to catch a trailer for an upcoming horror movie called Tell Me How I Die (2016). I felt the movie looked promising, and made a note to catch it when it became available.

Well, I screened Tell Me How I Die this week, and I can now state, unfortunately, that the movie squanders most of its remarkable promise.

First off, Tell Me How I Die features a great central idea. The movie is about an experimental drug called A9913 that can cause premonitions in those who take it.   The film’s setting is also strong and memorable: a high-tech dormitory where human trials for the drug are occurring. Beyond the high-tech building, a wintry storm rages.

On top of this, Tell Me How I Die also boasts some genuinely disturbing imagery and gore.  There are two death scenes here that will make you wriggle uncomfortably, as characters head unknowingly towards messy demises.

And finally, the movie even features a nice sense of “homage” to the oeuvre of Stephen King. The question on this front, however, is: does it mean anything?  Is the homage purposeful? Or is it just cute, an Easter egg for horror fans who have watched the same movies and read the same books?

Alas, the values I just enumerated are largely undercut by the movie’s excessively poor execution.

Tell Me How I Die is poorly acted for the most part, features terrible dialogue, and ends on a completely lackluster and underwhelming note. The movie goes on and on, and just gets worse and worse, until it ends not with a bang, but with a whimper.

I’m very disappointed with the final shape and form of Tell Me How I Die, and yet I still feel there’s a great horror film trapped somewhere in the ingredients, locked away in the footage, perhaps, just a step beyond our perception of “linear time,” to quote the movie.

“There is no sensation that the mind cannot experience as real.”

Former bartender, Anna (Virginia Gardner) -- in need of cash -- decides to join a human trial for a new “limbic stimulator,” A9913, designed to enhance human memory.  During a winter blizzard, Anna and other test members stay locked up in high-tech science building, under the watchful eye of the drug designer, twitchy Dr. Jerrem (William Mapother).

Anna soon becomes friends with the other human guinea pigs, some of whom have been given a placebo instead of the actual drug.  Among those taking the test: handsome, stalwart Den (Nathan Kress), illicit drug connoisseur Scratch (Ryan Higa), temperamental pool shark Marcus (Mark Furz), and Kristin (Kirby Bliss Blanton).

Soon after taking the drug, however, side-effects are noticed. In particular, percipients experience flash-forwards to future events. Unfortunately for Anna, she has a premonition in which she sees the other guinea pigs die, apparently from poison gas.  Anna also sees visions in which her friends die in terrible ways.

As Dr. Jerrem reveals, this is not the first clinical test for A9913. Another patient, from a previous trial, had a psychotic break, and his mind stopped experiencing time as linear. Now, that patient -- Pascal -- is back, able to anticipate everybody’s move (because of his future vision). Worse, he is leading Anna and her cohorts to violent deaths.

One of the most intriguing – if not successful -- aspects of Tell Me How I Die involves the allusions to Stephen King’s The Shining.

Both stories take place in isolated locations during blizzards, for instance. And both also contend with a “sense” beyond normal human mental processes.  The connections are not merely broad ones, either, but specific too.

For example, Dr. Jerrem’s office is number 237, which was the room of evil in The Overlook Hotel in The Shining (1980).

Also, the name of the big pharmaceutical company testing A9913 is Hallorann. Halloran, of course, is a character gifted with “the shining” in King’s narrative.

Another character in Tell Me How I Die is named Pascal, which may or may not be an allusion to Pascow in Pet Sematary (1989).

The point of homage is to draw attention back to material audiences recognize and love. But a really good homage is also transformative, and colors the new narrative in a way that deepens our understanding of it. I’m not sure that Tell Me How I Die succeeds on the latter front. I definitely recognized The Shining references, but they didn’t add anything to my understanding of the characters or their situation.

If the makers of the film don’t manage to make these allusions meaningful, they do certainly, put some imaginative thought into the nefarious, brutal murders orchestrated by the killer, Pascal, who perceives life outside the confines of linear time. 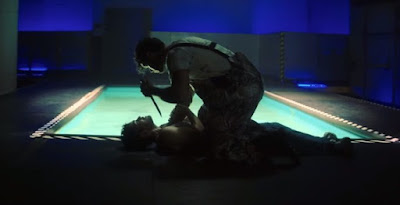 One scene finds a security guard crawl, face first, into a buried-in-the-snow bear trap. We see what is in his path, but he doesn’t.

The other death scene of note sees a girl drop into a laundry chute. She rockets down the channel, only to find it blocked at one juncture with coiled, barbed wire. She manages to stop herself -- briefly -- before it tears her to ribbons.

In both gory death sequences, director D.J. Viola meticulously sets up the traps, and makes viewers (painfully) aware of the damage the various devices (bear traps and wire) will do to the victims.  The key to staging a good death scene in a horror movie is to create and enhance an audience’s sense of awareness and dread about what is going to happen, sometimes before the character does. In these cases, Viola achieves that goal. In short, Viola creates suspense.

Unfortunately, Tell Me How I Die drags, and finally lasts about ten-to-fifteen minutes too long. The actors are called upon to play characters puzzling out the mystery, and some aren’t up to the task in some later scenes, and lack believability.

The survivors, in the last act, realize that Pascal can see the future, and since Anna has seen how they will die, they have to somehow change the future. If Anna sees it, then it will happen (because Pascal has seen it too and will orchestrate it).

Or, if that’s too byzantine, remember that these folks are in a medical facility.  Couldn’t they just tranquilize Anna and render her unconscious, again precluding her from “seeing” (and thus setting up…) their deaths?

The movie lasts so long that you start to actually outsmart the characters as they labor to come up with a way to survive the night.  But the movie, at this point, tries to be desperately clever, using an approach something like “Is it live or is it Memorex?”  Something dreadful happens, or something heroic, and then we find out it was only a vision, and now it has to happen again, but it does so in an unexpected way.

So all this creativity goes into the last act as the filmmakers try to play the audience like a piano, but the attempt fails.  The characters are cardboard. The situation is muddled.  And the suspense is minimal (except for the occasions I outlined above).  And then the movie just ends suddenly, with absolutely nothing resolved. It’s like the writer (James Hibberd) worked so hard on third act twists that he had nothing left for the denouement.  This is frustrating, considering your time investment in the film. It could have at least ended definitively (either happily, or sadly).

Instead, Tell Me How I Die just stops.

Most of the dialogue in the film is really dreadful, too. Scratch’s is probably the lamest. He is able to explain quantum reality and non-linear time, for instance, because he watches “a lot of Doctor Who.” The line, like virtually all the character’s jokes, falls painfully flat.

Some moments here even threaten to become camp, such as the moment that the young hero spontaneously sheds his shirt to face Pascal, so we can all ogle his buff, toned arms.

Tell Me How I Die?

Well, if this movie is an indication, it could be of boredom, or finally, derision.
at January 03, 2017

Email ThisBlogThis!Share to TwitterShare to FacebookShare to Pinterest
Labels: cult-movie review, The Films of 2016