In “Tarzan at the Earth’s Core,” Tarzan rescues a boy from a lion, but the young man is captured by enemy guards, who take him underground, to the “Dark World.”

The boy is a prince, and his father rules a kingdom in conflict with the Dark World.

Tarzan grapples with dinosaurs and other monsters to see to it that peace comes to the two kingdoms. 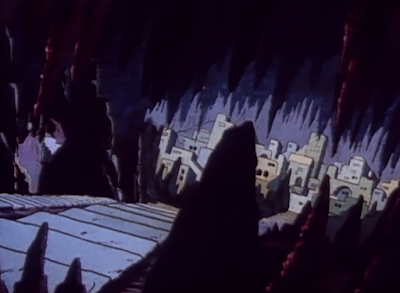 But the name Pellucidar never comes in this story, and we don't get a great Burroughs crossover.

Instead, Tarzan just visits another lost kingdom accessible from his jungle, this one subterranean. But never actually sees Pellucidar, or the Earth’s core for that matter.

The title is misleading in a big way, unfortunately. 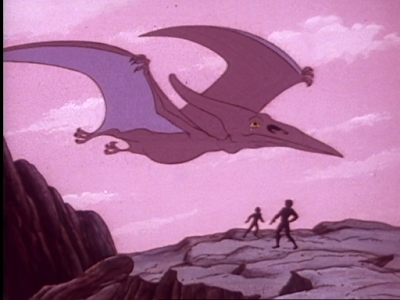 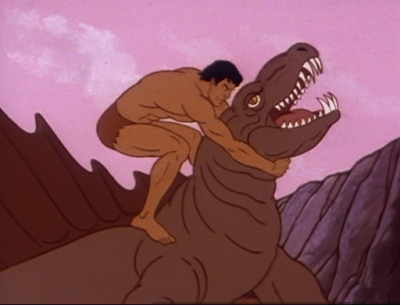 Also, I must point out that the opening act, which involves Tarzan saving a boy from a lion, is a repeat of an identical plot device from last week’s entry.  Not very creative. Two weeks in a row, Tarzan discovers a new adventure by saving a child from a dangerous animal.

Still, the episode is a prehistoric-palooza, pitting the lord of the jungle against dinosaurs like Sabor, a T-Rex.  There’s also a scene with a pterodactyl and a dimetrodon.

The message of the week is not expected. Tarzan is saddened that “people cannot learn to live together.” Indeed, he reminds us, “we all have strengths we can share.”

Perhaps because the title led me to have high hopes, I can say that "Tarzan at the Earth's Core" doesn't convey a lot of strengths, especially in a series, overall, that is quite good.