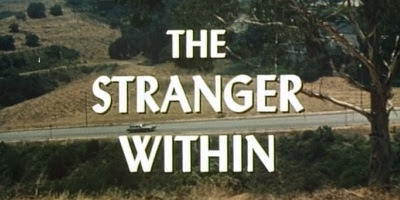 In The Stranger Within -- a TV movie that first aired on ABC in 1974 -- a painter and housewife, Annie (Barbara Eden) learns that she is pregnant.

Delight soon turns to mystery and paranoia, however. Annie's husband, David (George Grizzard) has had a vasectomy, which means that he cannot possibly be the father of the child she is carrying.

Annie insists she has never been unfaithful to David, but there is no other way to account for her unusual and fast-developing pregnancy.

David wants Annie to get an abortion, but on both occasions to have the procedure, Annie is felled by debilitating abdominal pains.  After the second such attack, she declares that she intends to keep the baby. David is upset and worried. Three years earlier, Annie had a dangerous and unsuccessful pregnancy; one that nearly killed her.

The pregnancy unfolds in a sinister and unusual way. Annie begins eating plates of raw meat, and loads of salt. In her sleep, she speaks in some unknown, inhuman language. And she develops the capacity to speed read whole books in minutes.  She soon comes to believe in the special nature of her child, and fiercely defensive of him.

Meanwhile, David grows more and more concerned about his wife. A hypnotist (David Doyle) learns from Annie the truth about her pregnancy.

She was impregnated, ostensibly against her will and without her knowledge, by an alien life form… 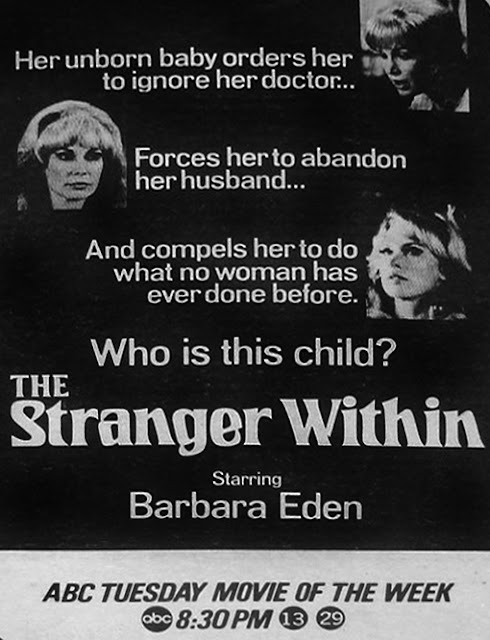 Fortunately, the great Richard Matheson is the writer behind this story, and he is able to create a tale that is more than mere knock-off.

Of course, there are some elements in common. Both tales track an abnormal pregnancy, and the manner in which that pregnancy sows distrust and estrangement between a husband and wife.  Doctors are involved in both stories two, though in the case of The Stranger Within, there is no conspiracy on the part of members of the medical community.

What may prove most interesting about The Stranger Within is the turn it takes after the second hypnosis.

Annie’s husband, David, asks why this is has happened to his wife, why she is “the only one” to endure this alien gestation.  The hypnotist looks at him -- and quite chillingly -- responds that there is no evidence to suggest that she is the only one dealing with alien impregnation.

Those words actually inform the climax of the telefilm. After delivering her alien child, Annie emerges in a field in the hills, with roughly twenty other human women.  They are all carrying their hybrid progeny, and are then “taken” by the aliens, whisked away from Earth, presumably never to be see again.

Indeed, she was not the only one. 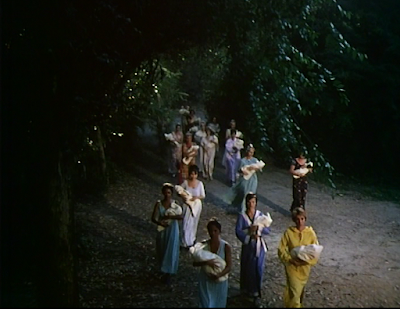 My only problem with this surprise is that it isn’t entirely motivated in terms of Annie’s story. She went to her doctor (played by Nehemiah Persoff) many times throughout her dangerous pregnancy. He even shared her unusual test results -- the baby has two hearts! -- with his colleagues.

Twenty cases like Annie’s would be hard to keep secret in any one town, or even city.

The Stranger Within was released not long after Roe vs. Wade was decided by the Supreme court, and abortion was made legal in the United States. I suppose one possible reading of the film is as a kind of under-the-surface pro-life tract.

All the women involved in these apparently immaculate conceptions don’t choose to abort their children.  Their husbands -- if they are at all like David -- all counsel abortion. They can't love children they don't see as their own.  They want them terminated.

In the film’s last scene, the women and their children are assumed into Heaven, essentially, with their children, never to be seen again here. On Earth, their husbands suffer, alone and confused, never again to have a wife, or a child, for that matter.

More important to me, however, is the fact that this ultra-cheap TV movie from the 1970s creates a pretty effective ending, considering the paltry budget at its disposal.

We see the women enter the clearing, and through a double exposure, they vanish from this Earth with their children. It doesn’t seem like a violent taking away (which gives rise, in part, to my interpretation, above).

This image is cross-cut with David at home alone, as he gazes at Annie’s painting of the alien environment. 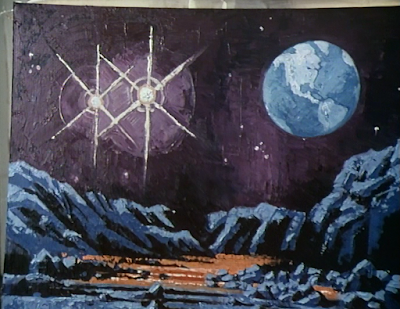 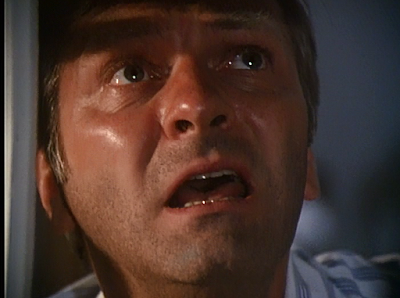 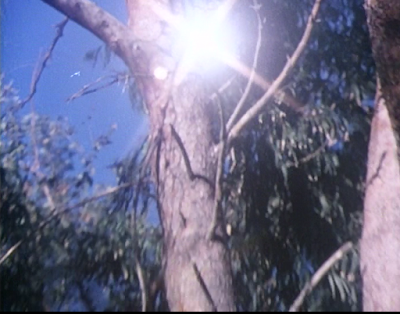 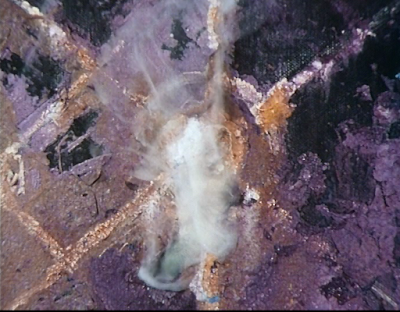 The evidence of alien involvement burns up before his eyes, smoldering and smoking. He runs to the window, apparently realizing what is happening, and we see him -- symbolically trapped within the outline of a window frame -- gazing up at the Heavens.  He is fully aware that his wife has been taken, body and soul, from him.

The camera zooms in on the sun -- our avatar for the aliens (or the Holy Ghost, if this is a pro-life tract) -- and we understand that David is being punished, his “normal” life now no more than ashes, like Annie’s painting.

Basically, this ending makes splendid use of (cheap!) film grammar, when certainly, today, we would get (expensive) CGI effects instead.

We’d see the women beamed up to a UFO, for example, instead of simply the double exposure disappearance, and focus on the sun as a figure of mystery in the sky.  I maintain that The Stranger Within’s approach -- open to interpretation -- is far scarier.

There's something genuinely terrifying about the film's last shot. The painting just burns and burns, as end credits roll.

There are aspects of The Stranger Within that are a bit comical, for instance Annie getting drunk on coffee, or over-salting her food constantly. And yet Barbara Eden commits to the material, and the film succeeds, like so many TV movies of the 1970s, in being highly unsettling. The ambiguity is frightening, and we are left with no answers. What will happen to these women? Their children? Will they ever be returned? Where are they headed?

Rosemary’s Baby is a great film, but The Stranger Within is a cheap-jack -- if unique and memorable -- variation on a theme, and one that ends on a high (if  diabolical and upsetting…) note.