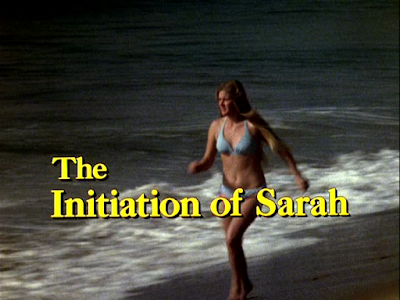 At Waltham, the school’s sororities soon assiduously pursue Patty. In particular, ANS (Alpha Nu Sigma) -- the sorority of popular young women -- wants her to join.  At the same time, however, these “sisters,” led by the vindictive and snobby Jennifer (Morgan Fairchild), reject Sarah.

Sarah is accepted only at PED (Phi Epsilon Delta), a sorority of misfits overseen by a house mother and instructor, Mrs. Hunter (Sarah Winters), who is reputed to be a witch.

When Sarah has a psychic outburst that causes Jennifer to fall into the water, Jennifer plots a terrible revenge against Sarah.  Mrs. Hunter, meanwhile, sees Sarah as the supernatural avatar who can restore PED’s place on campus.  Both Jennifer and Mrs. Hunter see Sarah as their means of consolidating power in their respective hierarchies.

After Jennifer’s twisted joke, Sarah is initiated at a PED ceremony in a hedge maze.  The last time this ritual was undertaken, a student died under mysterious circumstances.

But Sarah is not about to let that happen again. 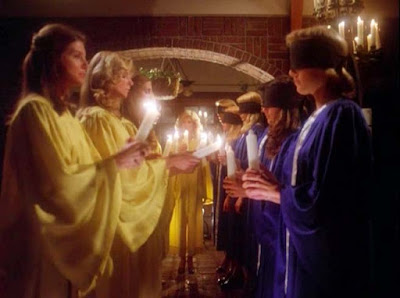 The Initiation of Sarah (1978) aired originally in prime time on ABC, February 6, 1978. Since then, it has become a beloved and much-remembered cult-TV movie, and one that was even remade in 2006.  In terms of its particular energy, the film from director Robert Day is strengthened by the performances of Kay Lenz and Morgan Fairchild, but clearly derives the majority of its energy from a then-current horror blockbuster: Brian De Palma’s Carrie (1976).

One subplot, in particular, seems familiar. In Carrie, a former enemy’s boyfriend is enticed to take Carrie (Sissy Spacek) to the high school prom. Once there, Carrie is viciously humiliated by Chris Hargensen (Nancy Allen) and Billy Nolan (John Travolta). The delinquents rig a bucket of pig’s blood to spill on Carrie when she is anointed prom queen in a rigged vote. This is the act that sends Carrie over the edge, and makes her a (psychic-powered) killer.

In The Initiation of Sarah, Jennifer makes her boyfriend (Robert Hays) invite Sarah to a party for a teaching assistant that Sarah has a crush on. He does as she wishes, and Sarah leaves her house -- all dressed up -- for the party. Unfortunately, Jennifer and the other sisters are waiting outside PED to pelt her with mud and tomatoes.  This is the act that turns Sarah to the dark side, embracing her ability to do harm with psychic powers.

On a broader level, both productions involve meek, shy girls, who can’t successfully negotiate a “rite of passage” in life (either high school or college), and strike back at a social event (a prom; a sorority initiation). Both young women also have overbearing mothers, who don’t understand them.  Carrie’s mother is a religious fanatic (played by Piper Laurie). Sarah’s mother is a shallow social climber.

And of course, both Carrie and Sarah possess frightening supernatural or occult capabilities.

The Carrie model was used very often by horror productions circa 1977-1978, including in efforts such as Jennifer (1978) and even Laserblast (1978). When viewed in this company, The Initiation of Sarah doesn’t look quite so bad. There are a few reasons for this assessment, and most of them have to do with the idea of what it means to be a “sister.”

Throughout the telefilm, Sarah and Patty negotiate the meaning of that word.

They are not biologically related; Sarah is adopted. Similarly, they are different in terms of temperament and looks. Patty is more concerned with her physical appearance and “belonging” to a group of well-liked people than is shy, intellectual Sarah.  And yet despite these differences, Sarah and Patty each attempt to care for the other throughout the events of the film.  They are able to love and respect one another, even when they experience differences. 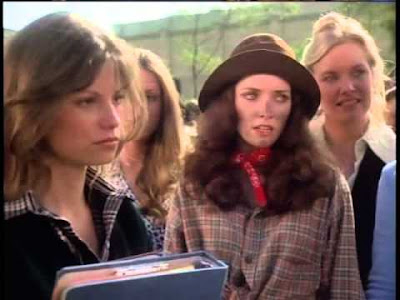 And then, of course, we have the setting of the sororities, where all those who belong to a house are defined as “sisters.” These individuals are joined through their sense of belonging at a specific house.  But again, we have two distinct examples to consider here.

Jennifer bullies Patty, forcing her to eschew her ties to Sarah.  She threatens Patty too.  It is clear at ANS that “belonging” is defined by hating those who don’t belong. In other words, camaraderie is encouraged by putting down others. We see this in ANS’s nickname for PED (“Pigs, Elephants and Dogs.”)  These sisters can only feel satisfaction with one another with they have someone else, someone outside, to hate. 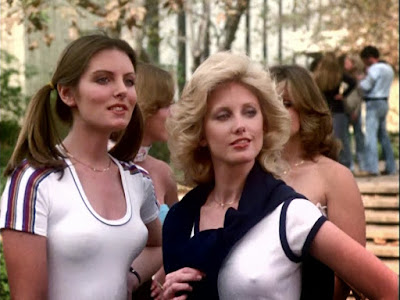 Meanwhile, and in quite opposite fashion, Sarah befriends a sister named Mouse (Tisa Farrow) at PED and helps her to feel better about herself; to not be so “down on” herself, to use the film’s disco-decade lingo.  Sarah -- being adopted, perhaps -- recognizes that being a sister is not only about blood, but about how you treat people; about how you care for people; how you support those you love.

When Sarah strikes back in the film’s not entirely scintillating climax, she strikes back both against Jennifer, who is an abuser, and Mrs. Hunter, an exploiter, who has hurt Mouse. Sarah doesn’t limit her assault to those in another sorority house.  She sees through someone closer to home, too, and that’s important to remember. She is not bound by the tribalism we see at ANS and in Jennifer. 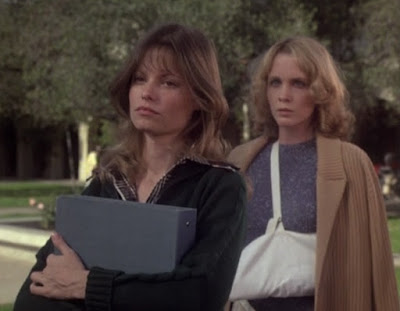 Sarah does not kill innocent people in her psychic attack either, another key factor that differentiates her from Carrie in the DePalma film. Sara causes Jennifer to age incredibly fast, but I don’t think Jennifer dies, unless I missed it. Sarah’s redemptive act, saving the innocent and hurting only the guilty, supports the film’s dramatic through-line that the only real evil power is “hate.”  We see that evil power practiced by Jennifer and Mrs. Hunter, but not importantly, by Sarah herself.

Even when Sarah is gone, at the end of the telefilm, her example makes sisters of others. Mouse and Patty find one another, and strike up a friendship. They begin to care for one another at PED.

It’s intriguing to me how this TV-movie compares sister relationships across many characters, and is able to get its point across. Yet watching the movie today, I wish The Initiation of Sarah were a bit less cartoonish in depicting the “bad” sorority characters, and a bit less dependent on the details of Carrie from a narrative standpoint.

The Initiation of Sarah is derivative, but not without merit. The movie might be described as Carrie's little sister, actually. It's easy to see the similarities, but if you look a little more closely, you can see that The Initiation of Sarah works hard to have an identity of its own too.
at January 12, 2017