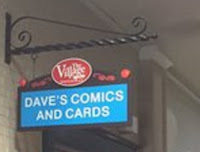 In this year of 2016, Richmond, Virginia lost a local institution.

I’m writing about Dave’s Comics and Cards, a comic-book store which closed its doors for the last time in July of this year following the death of its owner, Mr. Dave Luebke, in April.

To provide some context, 1988 was my first year at the University of Richmond, and the store was (barely) within walking distance of the campus.

My two best friends, Allan and Chris, would often hike with me through the woods to the Village Shopping Center to buy comics, toys, or other memorabilia from the store. There was also a video store close-by, so we would stock up on movie rentals and comic books.

And usually junk food too.

We didn’t have cars (or girlfriends, yet) so Dave’s Comics and Cards gave us something to look forward to every weekend.

In particular, I remember that Dave’s Comics stocked Star Trek comics, Fangoria, Starlog, and even William Anchors’ Epi-Log Magazine. Being away from home and my family in New Jersey was tough at first, but discovering Dave’s Comics and Cards with my buddies took away much of the loneliness and home sickness I felt.

The crazy thing is that I didn’t stop frequenting Dave’s Comics when I graduated from U of R in 1992.  I lived in Richmond with my girlfriend (now wife) until 1994, so I had plenty of opportunities to visit.

And when we moved to North Carolina in 1995, we would still make trips to visit her family in Virginia. Which meant, occasionally, that I could sneak into Dave’s Comics for a visit. Even if it was just for five minutes.

But totally unexpectedly, this comic-book store from my youth took on an greater significance for me in the last four years or so.

Every Christmas holiday, we visit the in-laws in Richmond, and since my son, Joel, turned six -- four years ago -- he and I have carved out a time to go to the store and drop some holiday money.

Dave’s Comics and Cards, in other words, is Joel’s first comic book store.

Over the years, he purchased a lot of toys there (McFarlane Monster Sets, at first), and even a giant Mothra (!) once.

Recently, Joel bought some transforming dinosaur eggs and glass figures in tiny cases. I know that Joel has looked forward, every year, to returning to Dave’s Comics to see what’s there.

So, really, the pilgrimage to Dave's Comics has become a father-son tradition.

I’m writing about it now because -- I realize -- this will be the first year that we don’t make our December trek together.

Mr. Luebke, I must say, always treated Joel with the greatest of kindness and even tenderness. I don’t know how he felt about a six-year old, enthusiastic child bursting into a store where there were so many valuable collectibles everywhere, but he always spoke to Joel with respect, and offered to take toys down from shelves so Joel could see them more closely.

On at least two occasions, Mr. Luebke outright gave Joel gifts (A Marvel superhero calendar, one year, and a glass figure another year).

I appreciated, so much, his patience and tolerance.

I also told Mr. Luebke on more than one occasion that I had been a patron of his store since 1988, but I don’t think he actually remembered me.

I can’t blame him.

A lot of customers passed through the doors of Dave’s Comics  and Cards during the thirty-four years it served the comic-book and sci-fi collectible needs of the community, and he would have had no reason to single me out as special or unique.

But -- during this first Christmas season since his passing -- I wanted to write here about how I remember Dave, my experiences at his great store from the 1980s through the 2010s, and the kindness he always showed to my young son.

Dave’s Comics and Cards -- and the man behind the store -- will be missed by the Muir family. We will remember him this holiday season, and on the ones yet to come.
at December 04, 2016