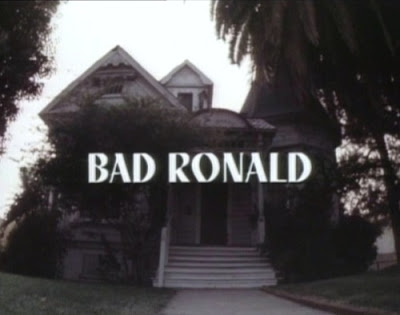 Young Ronald Wilby’s (Scott Jacoby) most recent birthday also falls on the tenth anniversary of his parents’ divorce. He now lives with his over-protective and paranoid mother (Kim Hunter). After having dinner with his mother, Ronald attends a pool party for a girl he is attracted to.  Instead of finding acceptance, he is mocked and teased

On his way home, Ronald is again mocked by a young girl, Carol Matthews (Angela Hoffman). She tells him that he is weird, and that his mother is weird too. Ronald flies off the handle, and pushes Carol.

She falls over, and dies after hitting her head against a cinderblock.  Afraid, Ronald buries Carol’s body and runs home to his mother. 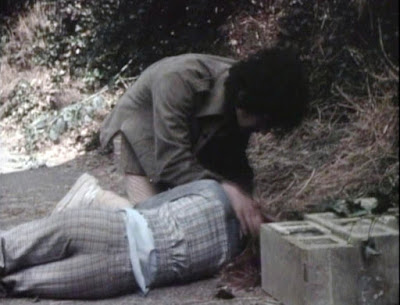 Mrs. Wilby suggests that the only option is for Ronald to hide in the family house, since police will soon be looking for him. She and Ronald work together to seal off the first floor bathroom, and make it accessible only through a panel in the pantry. Inside the hidden room, Ronald has a bed, running water, and his art supplies.

Ronald hides out in his room -- doing his exercises and studies -- until one day his mother tells him she has to go to the hospital for surgery.  She never returns, and Ronald stays in the family house as it is put on the market, and sold to a new family.

The new family in the house, the Woods, has three girls -- Babs (Cindy Fisher), Althea (Cindy Eilbacher) and Ellen (Lisa Eilbacher) -- and none of them are aware of the stranger in their midst, hiding in the walls.

“An old house like this has its own memories.”

For years, perhaps decades, a generation grew up remembering the TV-movie about the boy who lives behind the walls of his house.

In the 2010s, Bad Ronald (1974) was finally released on DVD so that generation could stack the film up against childhood memories.  (Beforehand, some folks confused it with Crawlspace [1972].

Delightfully, the telefilm, directed by Buzz Kulik still holds up today, at least from a dramatic and artistic standpoint.  Bad Ronald is a horror movie, it’s true, but one with a pitiable “monster” in Ronald Wilby. The murder he commits is accidental, and the teenage boy kowtows to his (nutty) mother’s desire to infantilize him and keep him forever in the family house.  He willingly submits to her plan to avoid prison, and of course, that’s the movie’s central irony. 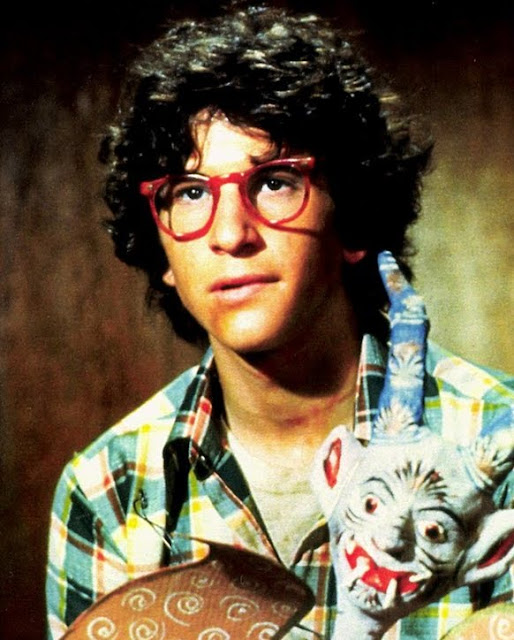 In order to avoid a mandatory prison sentence for murder, Ronald Wilby voluntarily imprisons himself in the walls of his house; becoming a voyeur but not an active participant in life.  Inside his prison, Ronald has his art work and book -- about the fictional, fantasy kingdom of Atranta -- and he retreats there on a near permanent basis. The only thing that rouses him to the real world: adolescence. Ronald is driven by his hormonal desire for one of the daughters of the new tenants, believing she could be with him, and join him in his fantasy world.

This is a fantasy too, of course.

The first portion of Bad Ronald is all about his mother’s indoctrination. Mrs. Wilby limits his entire world to one room, not for genuine fear of law enforcement, but out of her overwhelming and possessive desire not to be abandoned (as her husband abandoned her).  She then imposes on Ronald a strict regimen of rules and behaviors, which ensure that he will forever be under her thumb, and under her roof.

These rules are all for her, I might add. They are not, strictly speaking, about Ronald's well-being. 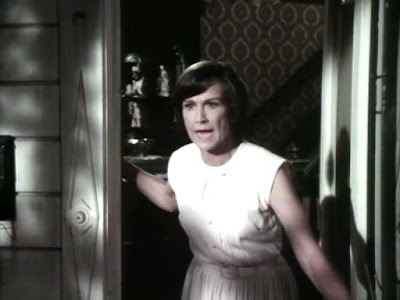 When Mrs. Wilby dies unexpectedly (apparently from complications of gall bladder surgery), Ronald is left with no companionship, no guidance, and no will of his own. Instead of attempting to leave the house and rejoin the world, he doubles down on his prison, though modifying it so he can spy on the new tenants, the Woods.

One of the best (and creepiest) scenes in the films finds one of the girls walking into the pinprick light of one of Ronald's peep-holes, and realizing that the walls have eyes.  Her comings and goings, her life, has been part of his "escape" from reality. 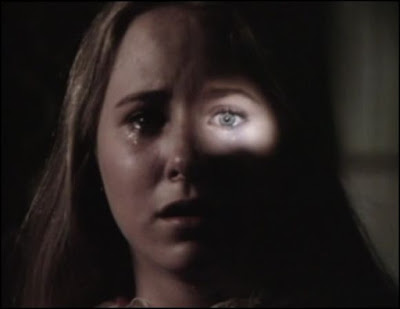 Ronald is a monster, as the movie makes plain. His murder of Carol is accidental, as is the death of Mrs. Schumacher. She’s the neighbor who dies of a heart attack when she sees him in the house unexpectedly.  But Ronald attacks and abducts at least two people, and his intentions, let’s say, aren’t exactly pure.

But despite Ronald’s anti-social ways, the audience understands him. He’s been nurtured and nourished by a pathological mother, and he is, in some senses, a normal teenager.  He wants what all teenagers want. Friends. Love. Connection.  But his mother’s pathology her indoctrination of him to her strange rules, has made him unacceptable to any one he would choose to court.  In short, Ronald is alone, and has no real chance to be anything but alone.

I love the way film locates the “horror” in the house. Ronald is the master of that particular domain, and has an advantage, since no one realizes it is inhabited by an interloper. Once outside the house, Ronald loses all his power….he is instantly captured by the police in the finale. He doesn't even make a good fight of it. The film’s most tense and successful scene, however, Ronald him bursting out of the fake wall, facing his victims, and, finally, in a sense, facing his situation and the world around him.

Bad Ronald is strange and discomforting. Ronald has some qualities in common with Psycho's (1960) Norman Bates. He seems strange and sick, but not evil.

Dangerous definitely, but not evil.

His story is a tragedy because Ronald's mother steals his life away from him, and turns him into a monster; or more aptly, a “ghost.” One sensed, but unseen. One present, but forever on the periphery of society, and family.  When he breaks out of the walls, he is breaking out of the prison his mother has fashioned for him, and which he has mindlessly come to accept as the status quo.

There’s a lot going on in the TV film, from the central theme of a stifling and sick motherly love, to the idea that one’s art can provide an escape of sorts, when one is confined, or limited by the real world.  In other words, it's a horror (TV) movie with a lot of ideas behind it.

But Bad Ronald is most likely remembered so fondly for its off-the-charts creep factor.  For the idea that there could be a monster hiding in the walls of your house, watching your every move…
at December 29, 2016