Well, I could not help but wonder if you have been watching the new Exorcist series on Fox, and what you think of it. I have to admit, in my humble opinion, I think this show was very well done.

And—while I have not been able to confirm this—I believe that was Brad Dourif’s voice I heard portraying one of the demons in an early episode (talking to Father Marcus).

Unfortunately, I don’t think the ratings have been high enough to earn it a second season so this show may be gone too soon. But with only two episodes left, I thought now was as good a time as any to ask you about it. I should also give you the obligatory warning to avoid spoilers, if you have not already (because they are all over the internet at this point). 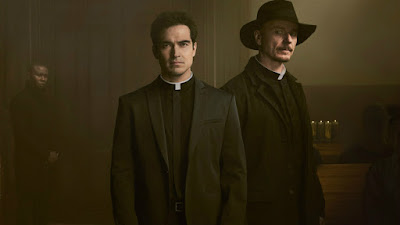 Chuck, thank you for posing the question. And, absolutely, I remember your great questions here.

At this point, I have binge-watched the first eight episodes of the Fox TV series, and to my surprise, I’ve (mostly) enjoyed it. It's a good show.

The Exorcist is a first-rate production, with excellent location shooting (in Chicago) and some remarkable performances supporting the narrative.

For those who haven’t yet watched the TV series, it concerns two priests -- Father Marcus (Ben Daniels) and Father Tomas (Alfonso Herreira) -- who attempt to help the Rance family in a crisis.

In particular, one Rance daughter, Casey (Hanna Kasulka) appears to be possessed by a demon. Her mother (Geena Davis) and father (Alan Ruck) turn to men of the cloth to save her.

The first few episodes of The Exorcist, in particular, are stellar. I have been particularly impressed by Daniels, Herreira, Kurt Egyiawan (Brother Bennett) and Kirsten Fitzgerald (Maria Walters).  They have, in a short time, developed fascinating, multi-faceted characters. 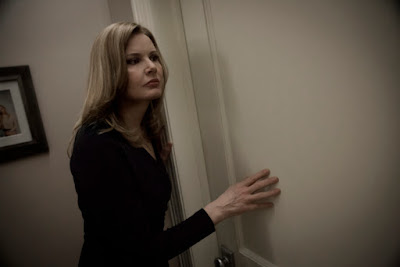 The Rance family, alas, I have found not quite as compelling.

Geena Davis seems to be sleepwalking through her role as the matriarch of the imperiled Rance family. There are reasons for Angela’s apparent emotional disconnection, but I’m not entirely certain that the performance works, even in light of that fact.

Also, I am a little disappointed with the turn the last few episodes have taken. There is a huge twist -- which I won’t spoil here -- about mid-way through this batch of episodes that harks directly back to the Friedkin 1973 film.

I feel that connection is wholly unnecessary, and actually distracting.

The first few episodes do a strong, sturdy job of setting up a new story in The Exorcist universe.  I see no motivating reason for the writers to make a connection between the original film and their new story.

In truth, I find the revelations of the connection little gimmicky.  For one thing, it all turns out to be a mundane “revenge” plot, and I simply refuse to believe that carrying a “40 year grudge” would be a demonic mode of operation or even interest.

For one thing, demons certainly reckon time differently than we do. Forty years could be the blink of an eye for such a being.  For another, “revenge” is a human motive, and therefore understandable and not very scary. As soon as demonic attack has a human motive, fear and uncertainty dwindles.

Additionally, the recreation of certain events from the time period of the Friedkin movie only succeeds in inviting unnecessary and invidious comparisons.

The exorcisms on the series generally fall flat. Basically, exorcisms are men yelling at a demon, telling it to leave a host body.  The demon usually eventually does so, but it isn’t always clear what words or recitations succeed in sending it away.

Nor is it apparent, visually, if the demon is actually gone, or just in hiding at the finale of an exorcism.  Consider the exorcism in episode eight of the series.  We are led to believe it works, of course.

Very few movies, beyond Friedkin’s manage to make the rite of exorcism compelling or relatable, or consistent.

Another observation: in stretching The Exorcist universe, the TV series crosses rather overtly into Rosemary’s Baby (1968) and The Omen (1976) territory; featuring a cabal of Satanists on Earth attempting to bring forth demons and devils in the flesh.

I’m not stating that this plot line is bad, only that it is a new development for The Exorcist saga.  I found the "conspiracy" angle fascinating, and deeply disturbing. The Maria Walters character is a frightening zealot. 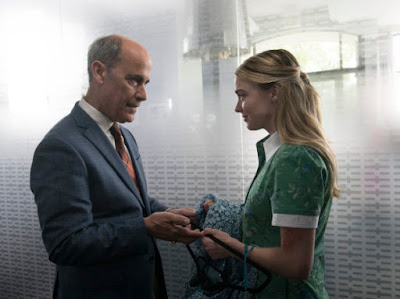 Finally, I want to write that I absolutely admire the way the series depicts the demon (Robert Emmett Lunney). We see him, often, as a balding old man in a suit.  He will appear behind Casey at times of stress, and make contact with her by putting a hand on her shoulder, or kissing her.  The character is called “Salesman” according to IMDB, and that’s a perfect designation.

There’s a strange menace about a demon visualized in this fashion, as a seemingly ordinary, but oddly slippery person.

I’ll finish out the rest of the season of the series with interest, but now that I know the demon’s very human end game, some of the fun of The Exorcist is gone for me. I think it could have been a great series, given the first few episodes, but instead it has settled out to be merely good. I do hope very much it returns for a second season.


Don’t forget to ask me questions at Muirbusiness@yahoo.com
at December 12, 2016

Email ThisBlogThis!Share to TwitterShare to FacebookShare to Pinterest
Labels: Ask JKM a Question, The Exorcist