The starship soon encounters the destroyer of such life, a powerful space probe, Nomad, which believes that its mission is to seek out and “sterilize” imperfect life.

When Nomad mistakes Captain Kirk (William Shatner) for its creator or father, scientist and 21st century Earthman Jackson Roykirk, Kirk orders the probe brought aboard the Enterprise for further analysis.

Fortunately, Lt. Uhura can be re-educated, and Nomad restores Scotty to life.

Spock attempts a mind-meld, and learns that Nomad is actually a hybrid, or changeling.  At some point after launch from Earth, the device collided with an alien probe, the “other” called Tan-Ru, and assimilated its power, as well as portions of its mission (to sterilize plant samples).

Nomad seeks more information about the biological units infesting Enterprise before setting a course to “sterilize” planet Earth, and now Kirk must out-think the machine, convincing Nomad that it is imperfect and must also be sterilized… 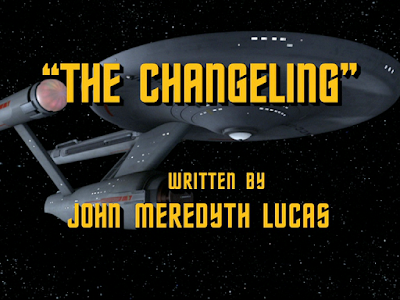 It is no secret that Star Trek: The Motion Picture (1979) is often referred to, not entirely positively, as “Where Nomad Has Gone Before” because of its similarities to “The Changeling,” an early second season episode of the original series.

The similarities are telling. 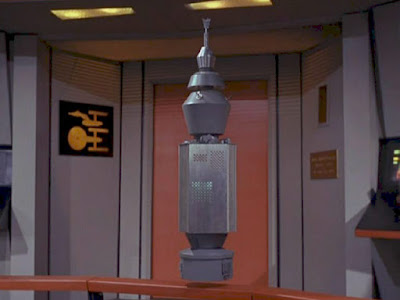 Both Nomad and The Motion Picture’s V’Ger are connected with “The Creator,” a personality of some importance. V’Ger believes his Creator is on Earth.  Nomad believes, erroneously, that Kirk is his creator, Jackson Roykirk.

Both Nomad and V’Ger are also, in some way, hybrids. Following an accident, Nomad fused or joined with “The Other,” an alien probe, Tan Ru, which altered its programming and made it super-powerful. 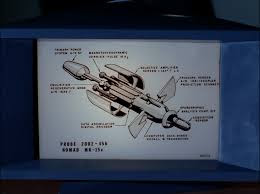 By comparison, V’ger fell into a black hole, emerged on the far side of the galaxy was made part of a giant spaceship by the denizens of a machine planet, in order to fulfill its programming.

Both Nomad and V’Ger similarly consider humans (carbon based life forms) to be pesky infestations, not true life forms.

And both Nomad and V’ger also communicate at a rate of speed not immediately detectable by the Enterprise. In both adventures, Spock must modify rate of communication for the Enterprise’s friendship messages to be fully understood. His efforts occur as the Enterprise comes under fire from terrifying weaponry, and its shields begin to buckle.

Of course, both V’Ger and Nomad possess that incredible destructive power mentioned above, which they wield on their long journey to Earth. Nomad destroys 4 billion lives in the Malurian system.  V’Ger destroys three Klingon battle cruisers, and the Epsilon 9 outposts.

Lastly, Spock conducts a mind-meld in both “The Changeling” and The Motion Picture, and the information he gleans from it proves crucial in understanding and “defusing” their opponent. 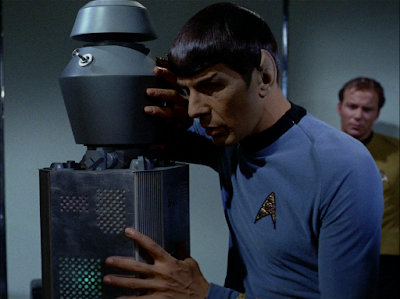 The Motion Picture is much better visualized, certainly, and features a visual/thematic subtext of birth, or rebirth.  The Enterprise, entering the V’ger cloud and spaceship, is basically the corollary for a sperm moving through the birth canal of a human female. That sperm is delivered (in the person of the Creator; Decker), and a new life-form is born, a hybrid of V’Ger and humanity.  This concept is literalized at the end of the film, when McCoy muses upon how it’s been a long time since he “delivered a baby.”  But really, The Motion Picture is (beautifully) about the conception of that baby.

Notably, the Enterprise/sperm also carries the foibles of humanity/carbon-based life-forms, which turns out to be the very thing V’Ger requires. We see Kirk’s obsession with the Enterprise, and the drive to “overcome” it.  We see Spock, cold and sterile, after attempting “Kolinahr” (the ritual to purge emotions) beginning his journey to embrace humanity and emotions.

Personally, I feel that Star Trek: The Motion Picture, while erected from familiar pieces (namely, the ingredients of “The Changeling”) is nonetheless one of the most beautiful and rewarding science fiction films of the late 1970s. It is also a very fulfilling Star Trek movie because the main characters, particularly Spock, grow in life-altering, humanity-affirming ways. I feel that the visuals and themes involving the Enterprise delivering genetic material, essentially, for the birth of a new life form, is handled in a remarkable fashion.

Although lacking that feeling of apotheosis, “The Changeling” is a compelling and ambitious episode in conception, especially considering the nature of Nomad.

The small probe (parodied to perfection in The Mystery Science Theater 3000 [1989-1999] episode “Laserblast) is not a typical guest star, and I can’t even imagine how difficult this episode must have been to shoot, with the floating Nomad moving and hovering under its own power, through doorways, into turbo-lifts, and so forth. 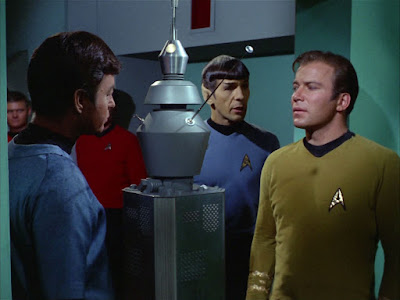 However, in the final analysis, “The Changeling” is not much more than another episode in which Kirk talks to death a conflicted, evil computer (see also: “Return of the Archons,” “The Ultimate Computer.”)

Worse, some of the details of the story, namely Uhura’s re-education, leave much to be desired.

Specifically, Lt. Uhura has her mind wiped when Nomad attempts to understand “singing.” McCoy and Chapel (Majel Barrett) attempt to re-educate her.  By the following week''s episode, however, Uhura was normal and no one ever brought up the fact that she had to be re-educated in a period of weeks.

If Uhura can be back to college level of education in just weeks, why does it take years for students to graduate from the Academy?

Here, the scenes with Uhura speaking Swahili and learning to read vacillate between charming and risible, moment to moment.

Also, Uhura's subplot involves another "sixties sexist" moment. When Nomad reports that Uhura's brain is a mass of conflicting data, Spock notes that, well, she is a woman.

Scotty also gets killed and revived in “The Changeling” making him the second Star Trek character, beyond Mr. Spock, who has really “gone where no man has gone before,” into the undiscovered country (death).  I always laugh when long-time fans complain about Khan’s magic blood and how it has cured death in Star Trek: Into Darkness’s (2013) Kelvin universe.

“The Changeling” has also conquered death in the prime universe.

All you need is a house-call from Dr. Nomad, M.D.

Additionally, it seems vaguely inappropriate, perhaps even obscene, for Kirk to be joking about his son (Nomad) the “doctor” mere hours/days after 4 billion intelligent life-forms have been eradicated in the Malurian System.

This is one of those TV stories in which you are expected, at the end of the story, to forget what happened at the beginning of the story.

Instead, we just get a pat, happy ending, with Kirk and Spock bantering lightly on the bridge.

Finally “The Changeling” fits in with what I see as one of the key weaknesses of Star Trek Season Two: it attempts to create drama by forging huge, galaxy-spanning threats. In the span of one season, The Enterprise vanquishes Nomad (a killer of 4 billion life forms…), a giant killer space amoeba in “The Immunity Syndrome,” a space faring cloud vampire about to reproduce in “Obsession,” and the planet killer in “The Doomsday Machine.”

Of all those episodes, only “The Doomsday Machine” qualifies as a great hour, and that’s because of the human stakes, involving Decker and his feelings of guilt/anger/revenge.

By this time in the series history, and in regards to Season Two, there seem to be three types of stories the series is focused on: parallel Earths (“Patterns of Force,” “A Piece of the Action,” “Bread and Circuses,” and “The Omega Glory”), giant galactic threats (“The Changeling,” “Obsession,” “The Immunity Syndrome” and “The Doomsday Machine”) and Kirk vs. Intelligent Machines (“The Apple,” “The Changeling” and “The Ultimate Computer.”) 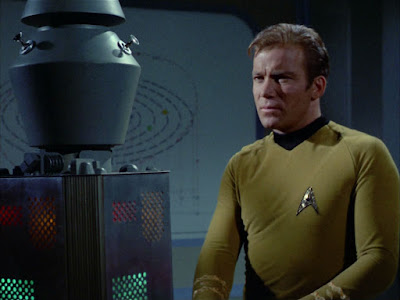 Some of those individual episodes are quite good, even classic, and yet one can clearly see that the second season is more formulaic, in a sense, than the first season was.

Many of the stand-out episodes of the second season include those that exist outside the formula, notably, presented by those three types: “Amok Time,” “Mirror, Mirror,” “The Deadly Years,” and forth.

“The Changeling isn’t a bad episode, and, in fact, I consider it a great “dry run” for the superior The Motion Picture.

That Robert Wise film features important character growth for the series’ protagonists, and parallels their development and maturation with V’Ger’s own.  “The Changeling” is an imperfect first try at such material.