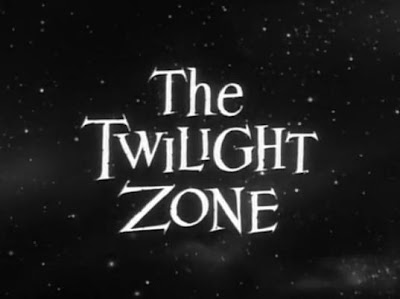 Across the decades, Rod Serling’s The Twilight Zone has rightfully earned a vast number of plaudits.  The anthology is beloved by generations, and seemingly exists as a permanent part of the American pop culture firmament.   The series been re-made on television twice (once in 1985 and once in 2002), and a feature film premiered in 1983, with another one slated for release in the years ahead.

And yet to listen to the accepted narrative about it, The Twilight Zone’s quality degenerated as it reached its final year.  The fourth season experiment of making the series episodes an hour in length was hard to recover from, the legend goes.  Creator Rod Serling was burned-out after writing something like eighty episodes and long-standing writers apparently had copious complaints with the new producer, William Froug.

While all of this background material may indeed be one-hundred percent true, an unbiased look at the final batch of Twilight Zone episodes reveals that the series was actually still in its creative prime.  The proof of the pudding is in the eating, so take a moment and just gaze across the episode catalog and you’ll see that the final tally of episodes feature some of the most well-remembered and often-talked about installments, including “Nightmare at 20,000 Feet,” about the gremlin on the wing of the plane, and “Living Doll,” the episode that introduced the fearsome toy, Talky Tina.

Other episodes, like “The Bewitching Pool” and “Come Wander with Me” have also grown in critical esteem since they were produced, and become part of the Twilight Zone mystique, a discussion which always begins with the words “Do you remember the one where…” 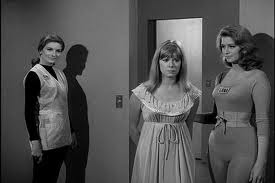 5. “Number Twelve Looks Just Like You.”  In this episode penned by Charles Beaumont, set in the year 2000, all eighteen year-olds in America must undergo a “transformation,” a physical re-shaping into a perfect specimen.

The problem is that there are only a handful of available models, so by-and-large, everyone in this future society looks like everyone else.

One girl, Marilyn (Collin Wilcox) doesn’t wish to conform to society’s standard of beauty, especially because all those who do, including her mother (Suzy Parker) seem vapid and obsessed with appearances.  Society eventually forces Marilyn to comply, and after her plastic surgery she immediately proves just as shallow and superficial as everyone else.

Produced in 1964, this episode gazes at both excessive political correctness (it’s unfair for some people to be beautiful when others are not!), and America’s always-growing obsession with youth and unnecessary plastic surgery.  In the age of Paris Hilton and the Kardashians -- when appearance not substance matters -- “Number Twelve Looks Just Like You” is more timely than over. 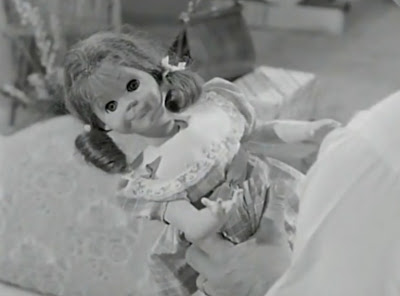 4. “Living Doll.” I don’t really have to write anything about the values of this episode here except: “I’m Talky Tina, and I’m going to kill you.”  This episode is so intriguing because the terrifying living doll is actually, in a weird way, a force of good.

Here, the doll grapples with a nasty stepfather (Telly Savalas) who emotionally brutalizes his new family.  Tina is murderous all right, but the stepfather certainly has it coming, and a little girl needs to be protected.

Justice is a concept the series often dealt with here, and here a talking doll is the one to mete it. 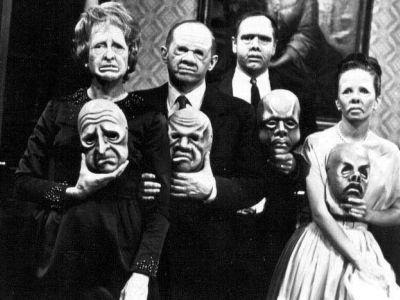 3. “The Masks” Directed by Ida Lupino, this Zone tells the story of an old man on the verge of death, Jason Foster (Robert Keith).  During Mardi Gras he holds a family gathering for the ungrateful relatives who seek to control and inherit his fortune. He requires each of his ungrateful relatives to adorn a hideous mask until midnight.

The masks are grotesque, and carved by an old Cajun. Each of the masks expresses a quality of its wearer, showing, respectively, vanity, avarice, sadism and the like.  When midnight strikes and the masks are taken off, the wearers are permanently changed, their real faces now reflecting those inner qualities...for the whole world to recognize on sight.

This ghoulish episode, which also reveals to audiences the face of death, corrects a flaw in everyday human existence: You can’t always tell what’s in a person’s heart by looking at them, can you?  With these masks, you can see – straight up – the ugliness that might be found inside.  It’s a macabre segment, and though the victims wholly deserve their fate, one also feels a sympathetic sense of horror at the thought of having to go through life with a face twisted by those masks. 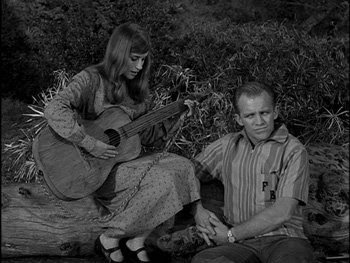 2. “Come Wander with Me.”  I’ve made no secret of my absolute love for this episode of The Twilight Zone. It’s one of my all-time favorites. Here, the Rock-a-Billy Kid, Floyd Burney (Gary Crosby) goes to backwoods Appalachia in hopes of exploiting the local music scene (and musicians), but instead comes across his own unpleasant fate, and a song that expresses his story.

That particular song, “Come Wander with Me,” is one of the most haunting things you’ll ever hear, and as it is replayed in the episode, again and again, it grows increasingly menacing, changed with new and upsetting lyrics.  The song was resurrected by director Vincent Gallo for his 2003 film, Brown Bunny. 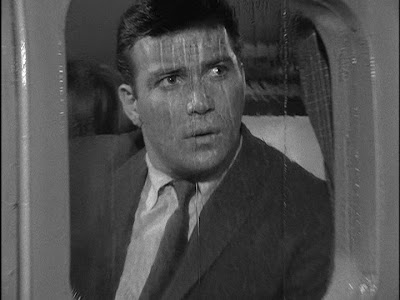 1. “Nightmare at 20,000 Feet.” Written by Richard Matheson and directed by Richard Donner, this episode aired originally on October 11, 1963, and is one of the show's most legendary efforts. In fact it's one of those stories that has become part of the American pop culture lexicon, and seems to have effortlessly survived the test and passage of time (and was remade, in 1983's Twilight Zone: the Movie).

You all know the plot of this episode by heart: a man named Robert Wilson (age 37), played by William Shatner has recently recovered from a nervous breakdown caused by "over-stress" and "under confidence." The incident that spurred his six months in a sanitarium occurred on a plane in flight.  Now Bob and his wife, Ruth (Christine White) fly home, and Robert spies a gremlin walking on the plane during flight..

I'll be blunt: if there is a more pitch-perfect half-hour of horror television in the medium's history, I haven't seen it. "Nightmare at 20,000 Feet” loses none of its power (or terror...) on repeat viewing. The story draws you in, and the universal fear of flying renders the story riveting.  William Shatner’s twitchy performance is great, too.  He plays a man trying to hold on to his sanity, but a man who is likable and good. We relate to his predicament and his fear on a very deep, very basic level.  How good is “Nightmare at 20,000 Feet?”  So good that you don’t care that the monster looks like a cuddly, over-fed teddy bear.

Runner-ups on this list of great Season 5 episodes would include "Uncle Simon," about an old man's ultimate revenge upon his greedy niece, "Spur of the Moment" about a woman trying to correct her past and destroying her future, and "The Long Morrow" a tragic story about star-crossed, time-crossed lovers.
at May 11, 2016