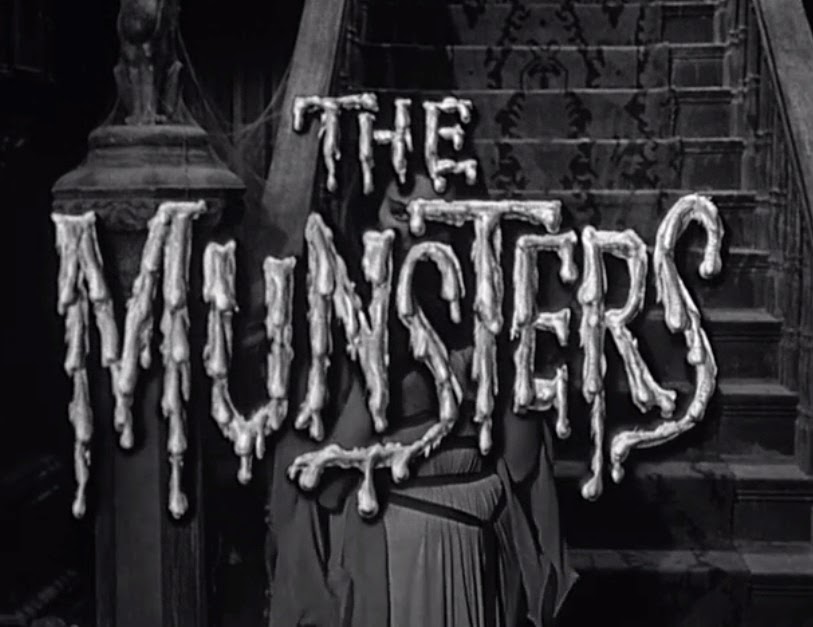 The Addams Family always had the higher ratings, but CBS's The Munsters was my favorite.

Growing up, I loved The Munsters as an homage -- at least in terms of design -- to the classic Universal Monsters.

But more than that, I loved the series' thematic content, which expresses the idea, basically, that "normal" is in the eye of the beholder.

And, even more than that, The Munsters suggests that people who are outside so-called societal norms can still possess loving families and loving homes.  We needn't pass judgment because they aren't exactly the same as we are.

The Munster family -- a Frankenstein Monster, a werewolf, two vampires and a pet dragon -- are thus stand-ins or surrogates for any outsider attempting to assimilate into America, and achieve the American dream of happiness and economic freedom.

The Munsters serve as a reminder that our country is a melting pot, and that it incorporates traditions from all over the world. Even Monsters -- if they  obey the laws and are good citizens -- can fit in and become part or our national tapestry.

Scratch the surface some, and there's a message in The Munsters too about prejudice.

To mainstream, middle-class eyes, the Munsters are different, weird, and more than a little scary.

But as viewers of the program, we start to see the substance of the characters, episode-to-episode.

And what do we register?

That they are just like us, despite their visual appearance as different or unusual.

Lily is the doting mom. Herman the good-hearted but clumsy Dad.  Grandpa is the possibly-senile old man who makes life difficult, but family is family, right? And little Eddie is the cute-as-button school kid, always complaining about his bedtime or chores, or homework.

And then, finally, we have clear evidence of the Munsters' ability to accept the other in their midst: Marilyn.

She is the daughter of Lily's niece, and a straight-up human with no monstrous qualities at all.  The Munsters don't exactly consider her normal (or attractive), but they love her in spite of these differences, and treat her as a beloved member of the family. They accept her, even if they don't always understand her.

Again, the idea behind The Munsters is almost radical for a mid-1960s sensibility.

Those of us who look or act different, the series states, are still family, and still loved...and lovable.

One can thus view the Munsters themselves as a symbol of any ethnicity or orientation that is not considered mainstream. We may judge these individuals as different or even frightening on first blush, but once we get to know them, we see the qualities that we have in common with them, instead of the things that divide us.

The introductory montage to the series is quite similar season-to-season, but I've selected the first season specifically for this piece.  As one might expect, the idea underlying the series is the conjunction of normalcy with strangeness.

First, we begin with Mom Lily. It is the beginning of any day, and she waits at the bottom of the staircase to greet her loved ones. 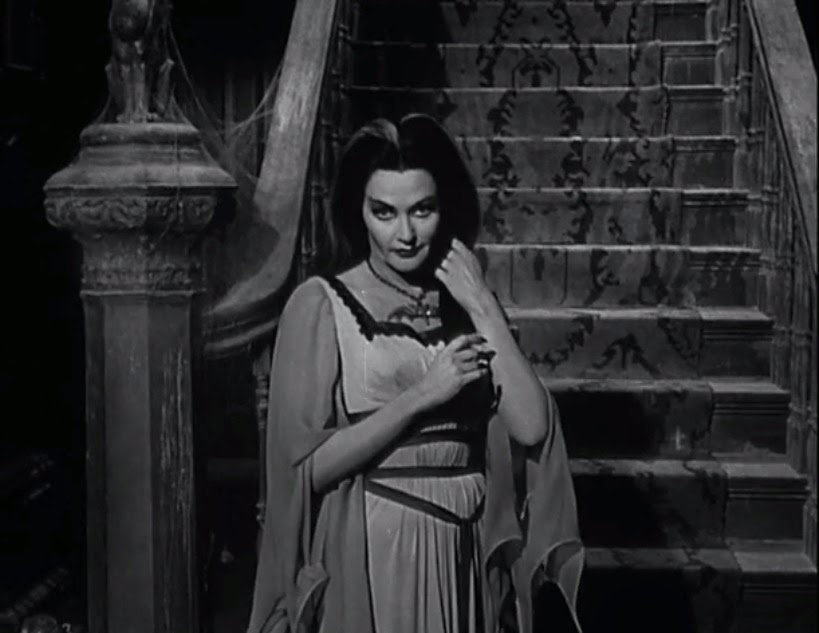 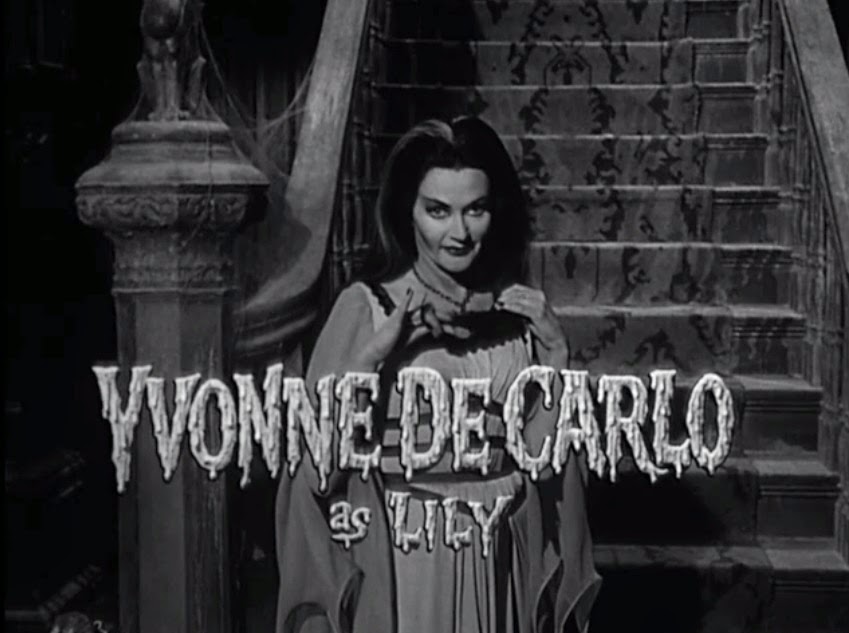 First up is Grandpa, Lily's Dad. He isn't quite right, and tries to feed on Lily's hand. His vampire instincts are not controlled well, apparently.  Lily withdraws her hand and shows her displeasure.  In this case, vampirism substitutes, perhaps, for senility, or just the generation gap.

Grandpa is still loved, even though he makes problems for the family on a regular basis. 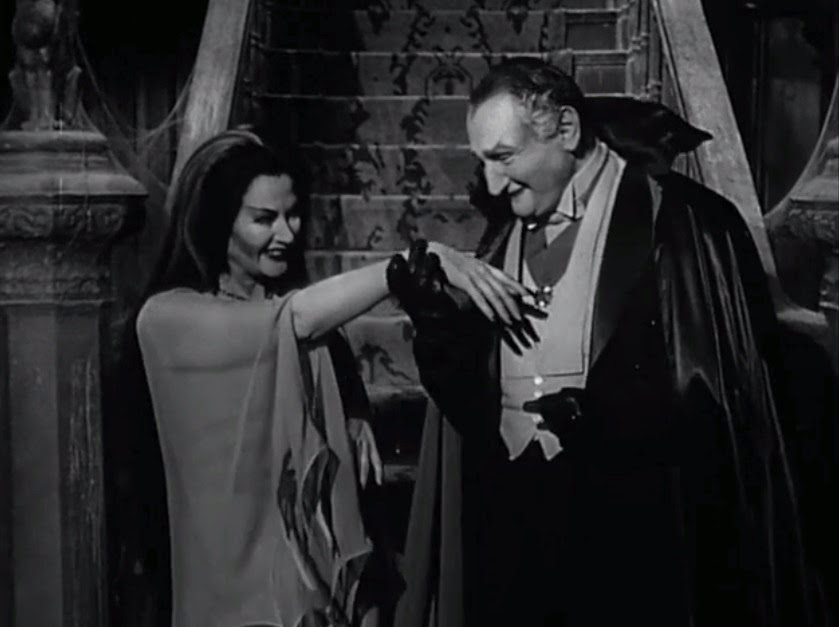 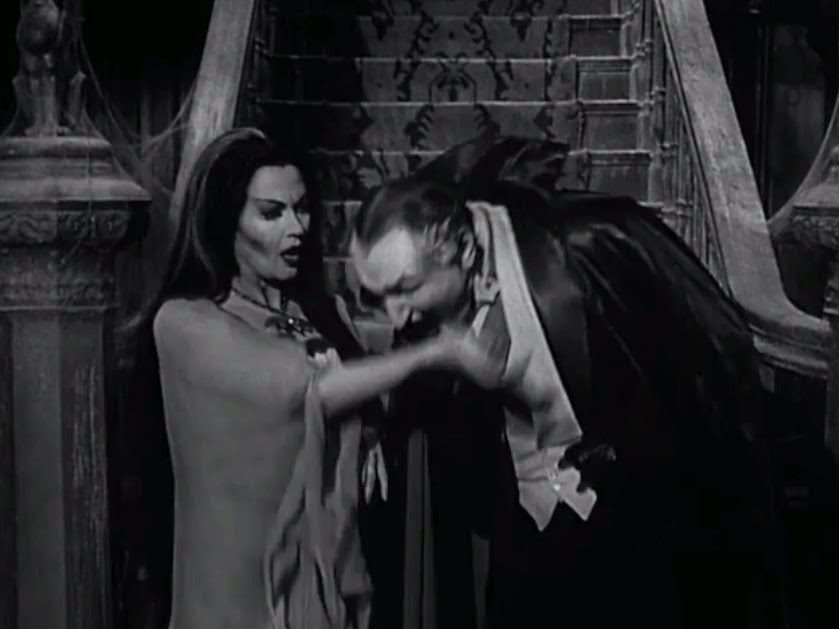 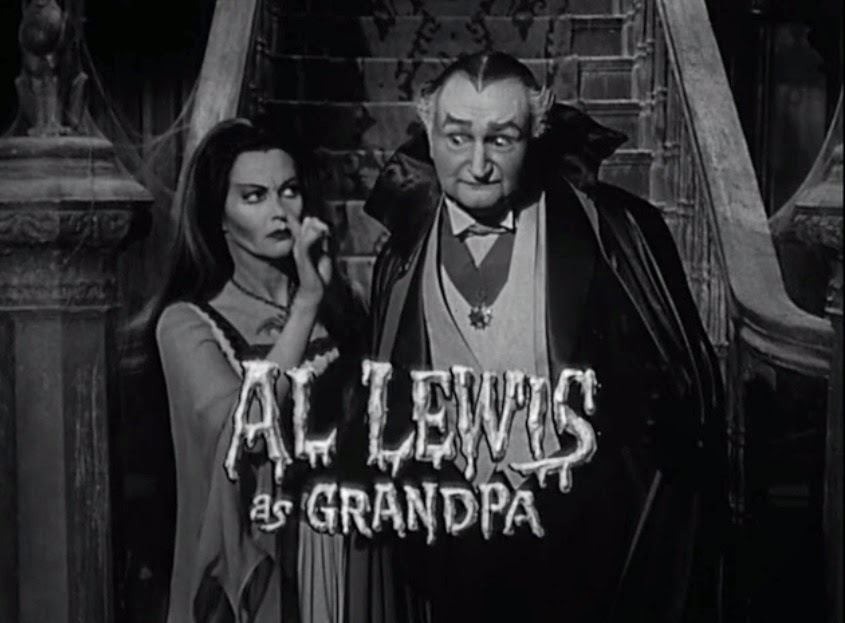 Next, we meet Marilyn, who is heading off to high school. She is the character we consider most like us, but -- being raised with the Munsters -- she doesn't see anything unusual about her family.

She pecks Lily on the cheek and heads to school, not even aware that society views her adopted parents as "monsters." I love the character of Marilyn because she reminds us of the innocence of youth.  She loves her family, and has not bought into societal concepts like prejudice or discrimination. She only sees these "monsters" as people she loves; her family. 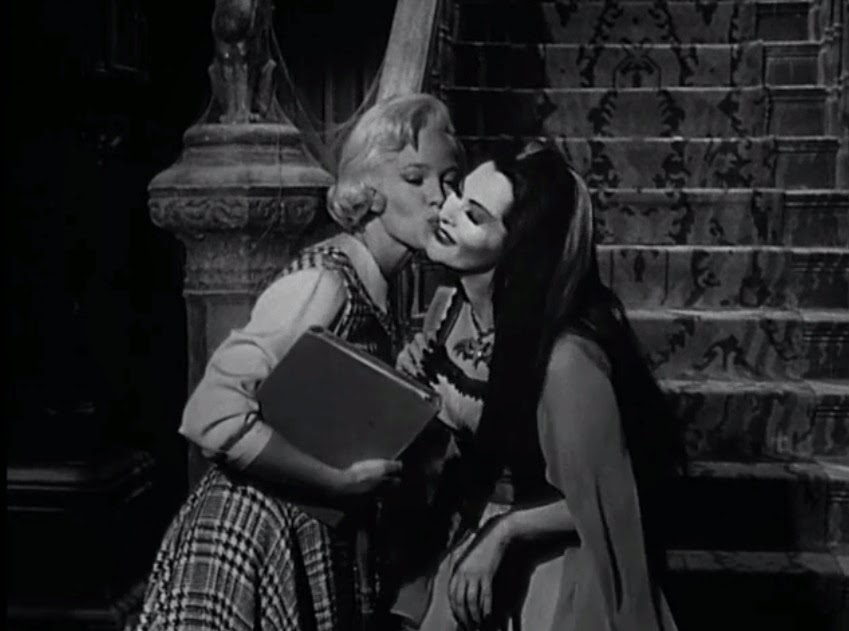 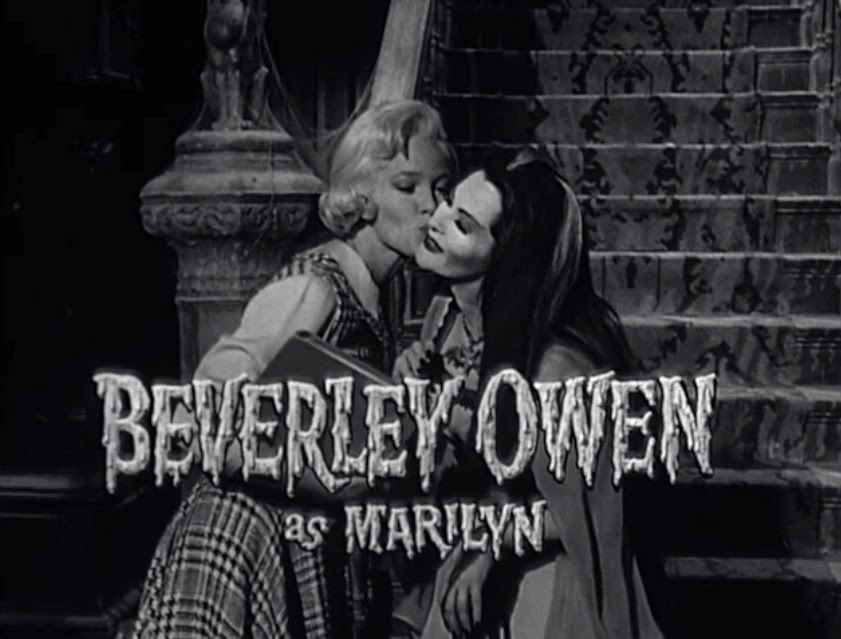 Next, Lily greets Eddie, the youngest Munster, and shows him too much attention. He wants to be grown-up, not doted on by his Mom. 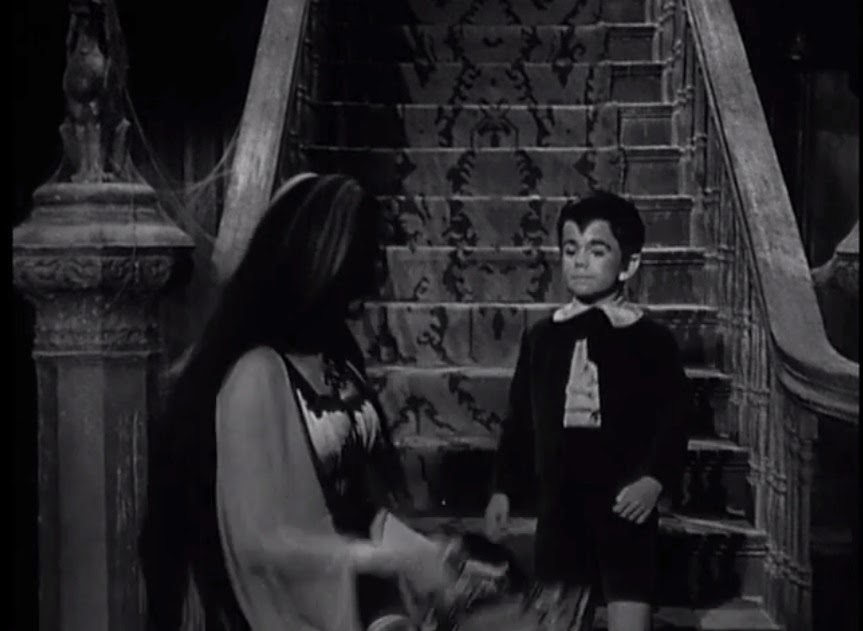 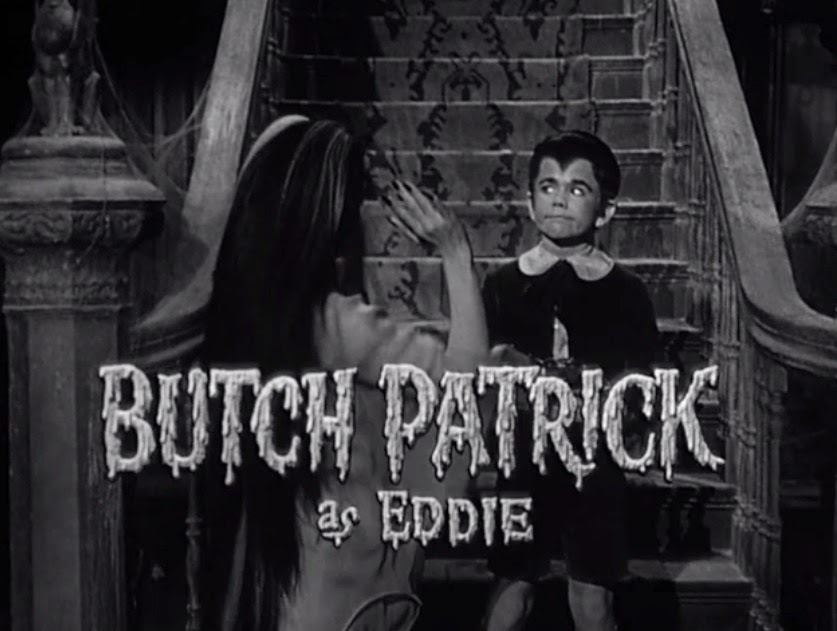 He sleepwalks down the stairs (and haven't we all felt like we start our work days sleep walking?) and gets handed his lunch-box by Lily before he heads off to the job.

They kiss, and he clearly likes the attention, thinking himself a lucky man, no doubt. 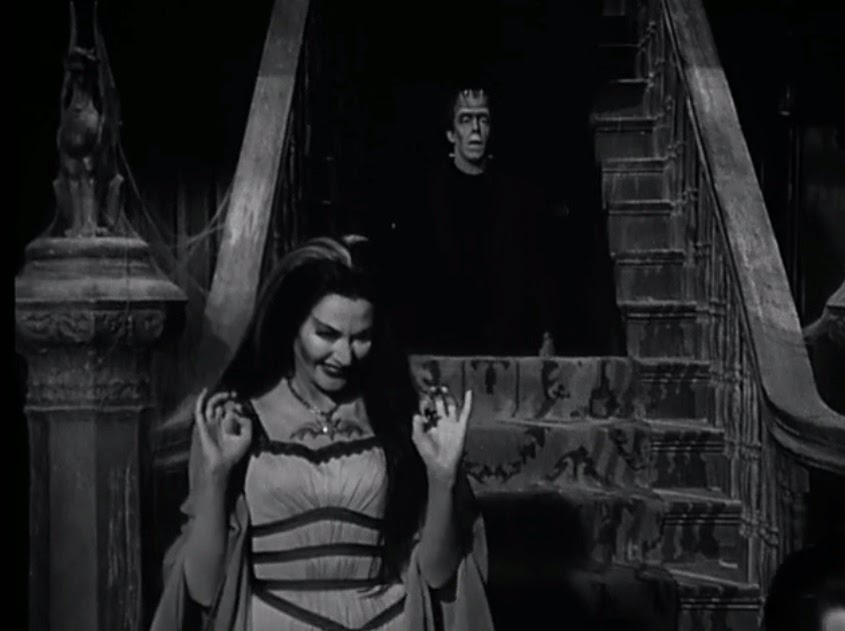 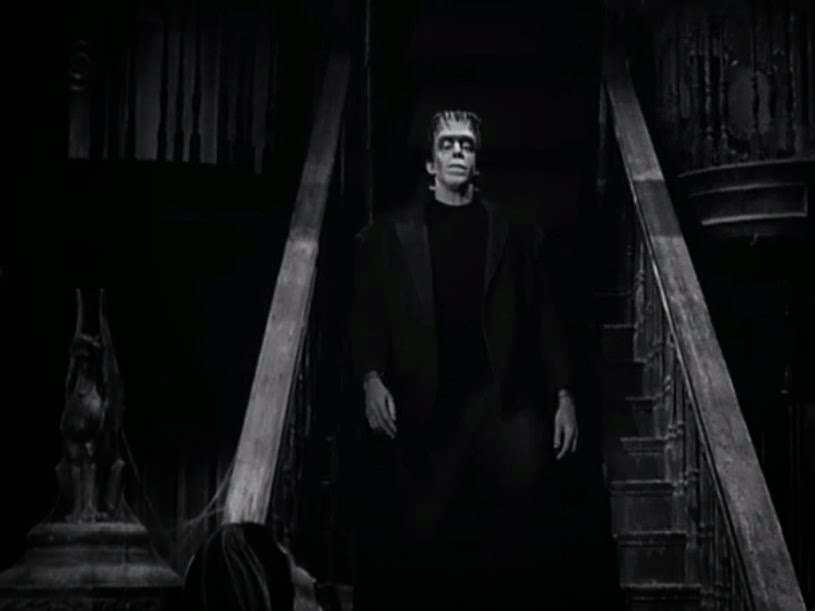 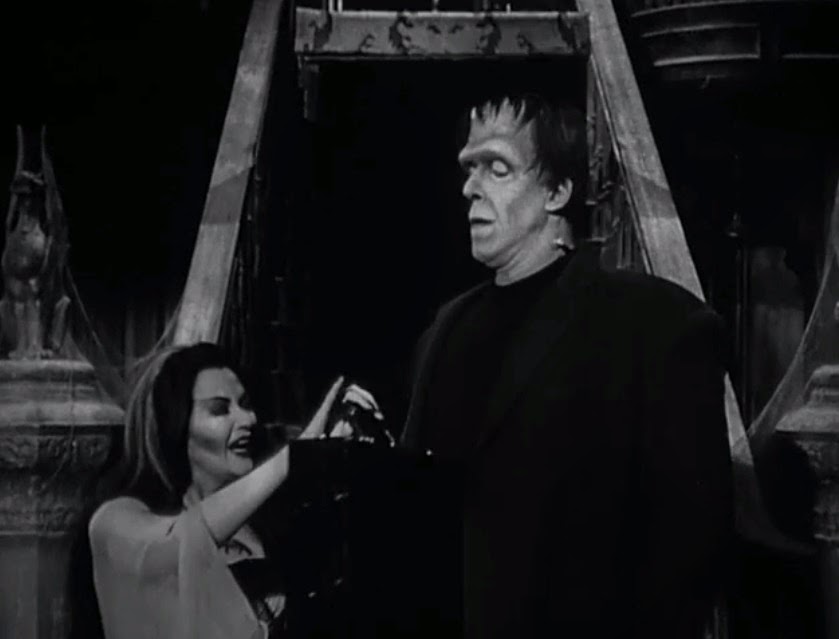 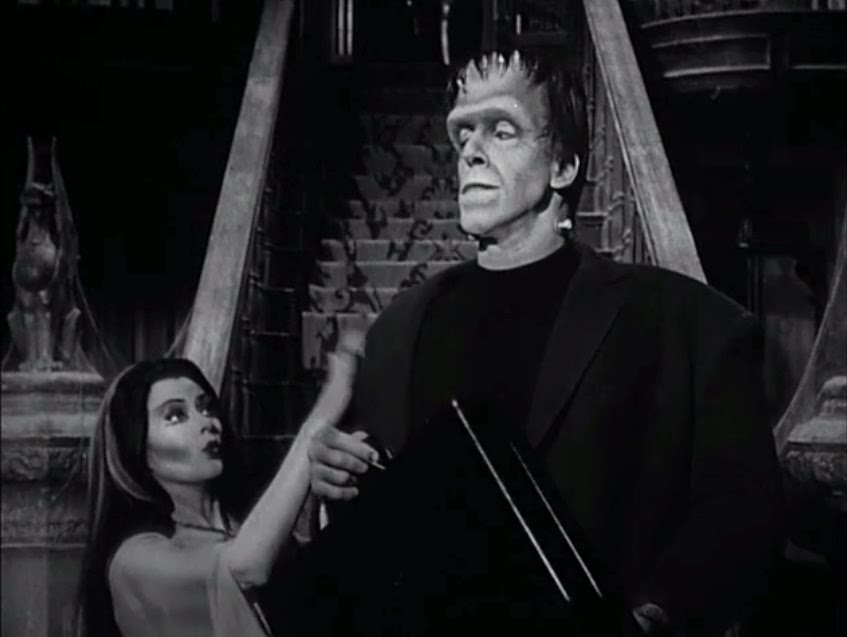 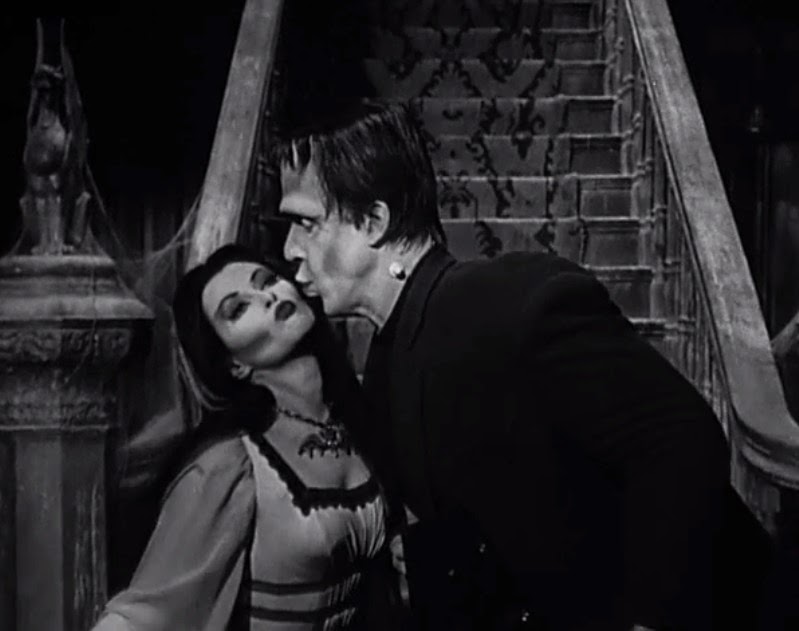 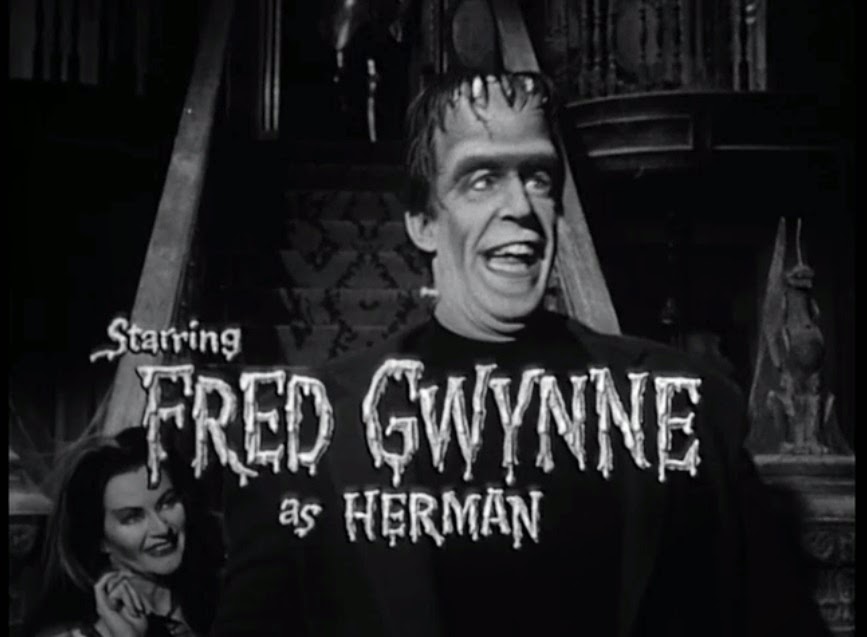 The staircase featured in the introduction remains in the center of the frame throughout, signifying the importance of hearth and home. Similarly, Lily's central position near the frame suggests her importance to the family members, one and all.  The idea is a of a normal family starting its day.

But this just happens to be a family of (loving) monsters.

And really, who are we to stand in judgment of this family and its customs, just because, visually, they don't resemble us?

If more Americans today remembered the lessons of The Munsters, we'd all get along much better. Don't judge my family, and I won't judge yours.

Now apply that lesson to Christians, Jews, Muslims, Atheists, gays, straights, conservatives, liberals, southerners, northerners, blacks, whites, Latinos, Asians, Democrats and Republicans...and so much of the fear and hate we see in our national discourse would surely dissipate.

If we can look at Herman and see a regular Dad, and not a monster, certainly we can do the same for our real-life neighbors, right?