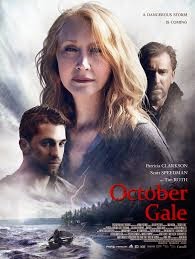 Stop Me If You Think You've Heard This One Before; October Gale is a remake of 20 better films

One wishes Patricia Clarkson gave a bored, lazy performance in October Gale. By all rights, she should be yawning, filing her nails, and rolling her eyes during every moment of this trite melodrama “thriller” while waiting for a large paycheck.

But the Oscar nominee gives a fully-invested performance, putting more thought into the character of Dr Helen Matthews than the script and pedestrian direction deserves, and probably for a very small paycheck based on the film’s overall low budget. As a storm gathers on an isolated Canadian island, Dr. Matthews, still mourning the loss of her dear husband, finds a wounded young man at her doorstep. She takes the mysterious William (Scott Speedman) in, healing him but she suspects he could be a dangerous man.  He won’t admit who shot him and why he’s fleeing. Is he a victim or a criminal?  As the rain starts to fall, Helen discovers there’s more to fear from the outside and that no one is coming to save her.

If this sounds like the synopsis of a Touched By An Angel episode, it’s entirely possible. What it’s not is a compelling plot for 90-minutes. The story generates zero suspense.  Even the characters seem to care little about the danger. When unknown assailants are about to take siege, Helen and William play an un-cinematic game of cribbage.

Being a gifted actress, Clarkson reads between the lines in the script and allows Helen’s agony to simmer throughout the film. In one moment, Helen falls in the lake The camera focuses on her as Clarkson luminously evokes a sense of peace. All the sadness could go away if she just stays underwater and drowns. Her thoughts can be read clearly. It’s a moment that deserves to be in a stronger film.

Tim Roth, another dramatic dynamo, arrives late in the tale. He too refuses to phone in a performance, even though his character is given no shadings, no real heft.

Writer-Director Ruba Nadda does capture some fine visual compositions, including a shot in which Speedman and Clarkson are framed in a window as they await their assailants. The camera pulls back until a downpour overwhelms the screen, symbolizing the chaos entering their lives. There is a sense of space in the photography: The lake house encased by a blustery day, dark clouds looming and rustling trees, the calmness of the Georgian Bay getting choppier and choppier.

Nadda had the pieces in place for an interesting film, strong actors, dazzling photography, and a lingering score.

Without an intriguing storyline though, all that talent has been wasted.

Jonas Schwartz is a voting member of the Los Angeles Drama Critics, and the West Coast Critic for TheaterMania. Check out his “Jonas at the Movies” reviews at Maryland Nightlife.
at March 12, 2015